Protesters take to the Streets Railing Against Ferguson Decision 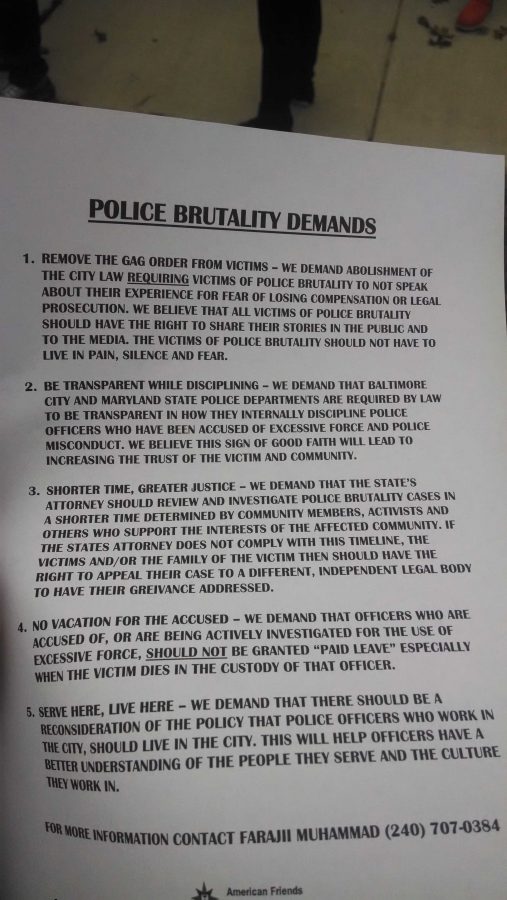 By The MSU Staff

Approximately 75 Morgan students gathered in front of the Northeastern District police station on the edge of campus to protest the Grand Jury’s failure to indict Officer Darren Wilson in Michael Brown’s shooting.

“No justice, no peace, no racist police,” students shouted, waving placards and braving the cold to voice their anger.

As the group of marchers moved from the police station down Argonne Road to Hillen Road and then up Hillen toward Cold Spring Lane, they were joined by more protesters until their numbers reached more than 200.

Chinedu Nwokeafor, a Morgan senior and former head of X-assembly, led the crowd. “People need to understand,” he said. “This is like the new Jim Crow.”

Helicopters flew overhead while police blocked off streets and monitored the crowd. Students formed a circle in the middle of Hillen Road. They held hands and stood in silence for four and a half minutes, representing the four and a half hours that Michael Brown was left on the streets of Ferguson after his death. Then they sat on the street, blocking traffic.

Police showed up to hold back the traffic and set up roadblocks to allow the protesters to continue up the street.

A local pastor spoke to the crowd which was peaceful.

Farajii Muhammad, the announcer for Listen Up at WEAA, passed out a list of five “Police Brutality Demands” urging more transparency for police oversight investigations and disciplinary proceedings, among other things. He also urged protesters to boycott Black Friday saying that black people have a lot of spending power and it is better to talk with your money sometimes.

Courtney Mercado, vice-president of SGA addressed the crowd. “Uplift this black community,” she said. “It’s not about Ferguson. It’s not about Trayvon Martin. It’s about you, you and you.”

Morgan President David Wilson said, “Morgan has a tradition of bringing about social change dating back to the 1940s and 1950s when, of course, they refused to get up from a lunch counter. I’m very pleased to see the students here at Morgan basically say to the nation that our lives matter, and we don’t embrace what we see coming out of Ferguson, Missouri.”

Nwokeafor urged his fellow students to stay active. “Differences are usually made by keeping people aware and sticking to the facts and information and actually finding ways that you can do something,” he said. “Even being in school, focus on your education as well as your concentration and make sure that as you get out into society, you’re having a job that can help the black race. Even with the rallies, you can come out, help people and education yourself and tell your friends to stay informed, most importantly.”