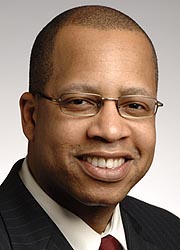 Shawn Tarrant’s attempt to return to the House of Delegates by means of a write-in campaign failed Tuesday night.

Tarrant, who placed fourth in June’s Democratic primary in House District 40, a district that is heavily tilted towards Democrats in terms of registration, finished fourth again Tuesday, but by a wider margin.

Instead, Conaway will join fellow Del. Barbara Robinson and newcomer Antonio Hayes in Annapolis in January.

Conaway Jr., Hayes and Robinson received 30.45 percent, 31.75 percent and 30.65 percent of the vote, respectively, according to the Maryland State Board of Elections website.

Tarrant had encouraged voters to write his name on the ballot instead of Conaway Jr. because Tarrant saw Conaway as an unfit candidate, thanks to a series of bizarre You Tube videos posted by Conaway.

In an interview with WEAA last week, Tarrant said, “This came about with people calling me after they witnessed these videos.”

Tarrant said he was first made aware of the videos after a constituent asked if he had seen them.

Tarrant said, “We had an idea that there were things that were not quite right and to see these videos really were an eye opener.”

Tarrant said, “For eight years we had to protect Frank Conaway like a family member because he was an embarrassment to the district.”