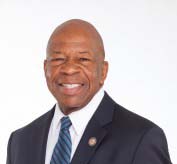 Rep. Elijah E. Cummings is running for re-election for the 7th Congressional District for the tenth time. He has spent almost 20 years in Congress.

Cummings has been a fierce fighter and Democratic Party champion throughout his years in Congress. In March 2014 Rep. Darrell Issa, (R-Calif.) cut off Cummings’ microphone at a House Oversight and Government Reform Committee hearing regarding an IRS scandal within the Obama administration. The Maryland congressman refused to be silenced and went on to expose flaws in the committee’s investigation.

Cummings serves as the ranking minority member on that committee and is a senior member of the Joint Economic Committee and the House Committee on Transportation and Infrastructure.

Cummings has been noted for his stance on issues like education, employment and health care. He has made it clear that he believes Congress should take action regarding these issues because they affect the average American family.

In fall 2013 Cummings introduced two pieces of legislation that would help provide more access to higher education. The FAFSA Fairness Act and the Net Price Calculator were implemented to help make the college process easier for prospective students. “Education is a right, not a luxury”, said Cummings.

Cummings supports raising the minimum wage and extension of unemployment benefits. He said legislation should focus on creating jobs for the American people.

He also has been a staunch proponent of health care reform and President Obama’s Affordable Health Care Act.