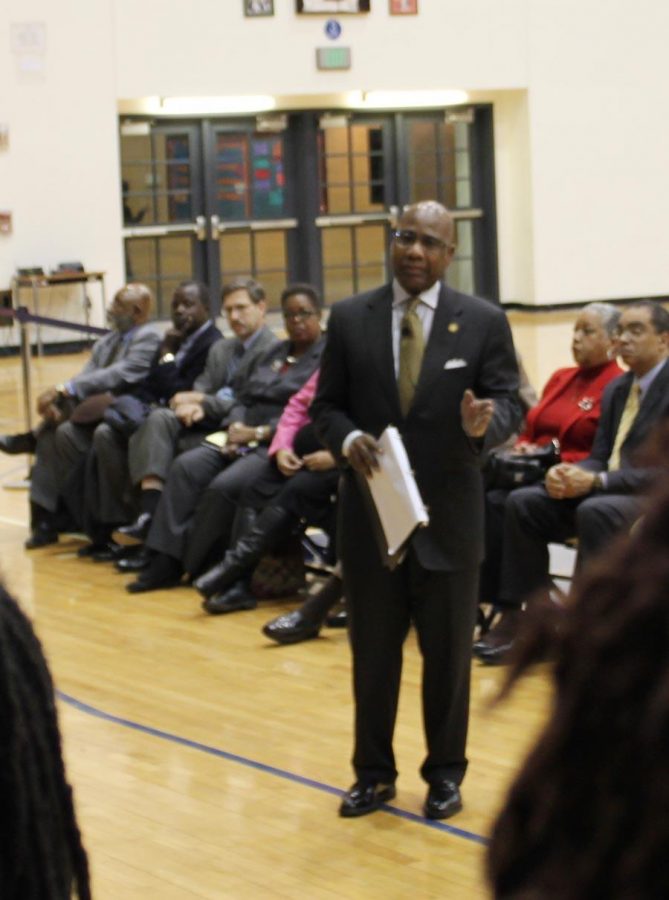 On the heels of two shootings last semester and a series of robberies, he assured students that their safety was a priority for him and announced several new tactics to improve security. Nationally, President Wilson has urged a ban on handguns in the Huffington Post and elsewhere. Here at Morgan, he says, he is taking decisive action.

By May, he intends to have five new security booths placed at strategic locations as well as improved lighting on campus. He has initiated a “see something, say something” campaign so that students understand their role in protecting the community by staying aware of their surroundings.

Because some of the recent crimes have been committed by people in the community—and it is sometimes hard for campus security officers to know whether a person has a legitimate interest in being on campus or not—he will be requiring all MSU students and personnel to wear their Morgan I.D. badges. (Interestingly, only three of the 16 administrators flanking President Wilson were wearing visible I.D.) “Security will be stopping people without I.D.s visible,” Wilson said.

Other initiatives include police dogs and “tandem patrols” where Baltimore City Police partner with MSU security for more effective protection.

President Wilson emphasized a “zero tolerance” policy for violence on campus. “We are planning an anger management course at the University that will be available for every student, faculty member or staff member,” he said. He referred to “nonsense” that sparked fights, such as someone getting mad because “I don’t like the way you put pepper on that.”

The new anger management class will give people more tools to diffuse violent situations.“ To show I mean business, I am going to be the first in this class,” he said. “And I hope two hundred of you will be there, as well.”

Students voiced concern about a host of issues ranging from inadequate walk-in hours at the health clinic to lack of access to specific journals at the library. For the most part though, students complained about the bureaucracy at Morgan and the unhelpful attitude of administrators.

Referring to a “mistreatment of students” by administrators and secretaries, Morgan senior Joshua Harris demanded, “When are we going to hold these people responsible for such inexcusable actions?”

Tied to complaints about the MSU administration were questions about why communication between students and staff was so poor, why financial aid information wasn’t regularly conveyed and why the financial aid refund checks were so hard to procure. Students at Morgan describe waiting in line for two hours just to get the refund money they are due from the financial aid office.

President Wilson assured students that he was moving toward a process of electronic delivery that he hoped to have in place by the Fall. Further, he promised that communication would improve. Indeed, the directors of admissions, bursars, financial aid etc., are currently conducting a “comprehensive review” of processes and also how they communicate about their processes to students. He promised that changes were on the way—and then ended what was in essence more “State of the Union” speech than Town Hall event so that everyone could get home in time to watch President Obama’s State of the Union address.