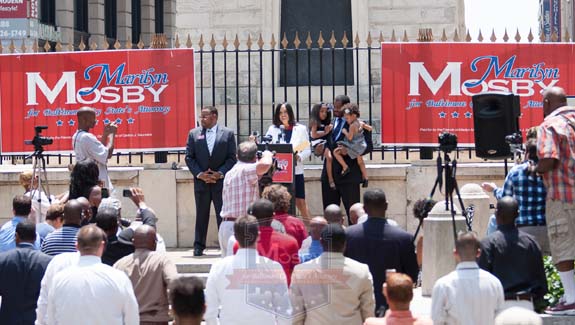 That’s the message that she’s been broadcasting as she campaigns to be the next State’s Attorney for Baltimore City – including to a crowd of about 30 students who paid close attention to all the panelists discussing police brutality and what it’s like to be black in today’s society, but especially to Mosby.

“My job, as a prosecutor, is to apply justice fairly and equally with or without a badge,” she said.

When she was 14, someone mistook her cousin as a neighborhood drug dealer and killed him outside of her home. She was heartbroken because they were extremely close. Her cousin was 17 years old and, the boy responsible for his death was also 17; so Mosby looked at the system and asked how they could have prevented this tragedy. That was the moment that she became interested in transforming the system, and she knew that she was to spend her life doing it.

“You had a 17-year-old that was now going to a grave, but the individual responsible for his killing was also 17 years old,” Mosby said in an interview. “So I looked at the system and asked how could we have gotten to that kid, ‘cause he’s a kid as well, before he got to the criminal justice system?”

Marilyn James was born and raised in Boston by a single mother. She participated in the nationally-acclaimed desegregation program, Metropolitan Council for Education Opportunity (METCO), and later graduated with honors from Dover-Sherborn Regional High School. After receiving a scholarship, she attended Tuskegee University and, in 2002, graduated with a bachelors degree in political science. When it came time for Mosby to apply to law schools, she kept getting wait-listed because her Law School Admissions Test (LSAT) scores weren’t as good as they should have been.

“Somebody from Tuskegee advised me to kind of think outside the box,” she said. “So I called up to the law schools and asked them for an interview.”

After calling numerous law schools and going on countless interviews, she was finally granted admission to Boston College Law School, and, in 2005, earned her law degree.

“At some point there was a change in the administration and I didn’t necessary agree with the priorities of the office,” Mosby said. “I had enough experience to go and try to diversify my legal experiences.”

Mosby joined Liberty Mutual Insurance as a lawyer doing civil litigation. She was later promoted to a unit where she investigated and defended against insurance fraud. She worked there for three years before she decided to run for Baltimore City State’s Attorney.

On June 24, Mosby defeated the incumbent, Gregg L. Bernstein, for the Democratic nomination, taking everyone by surprise because she was considered the underdog.

Throughout her campaign, she used social media to her advantage to develop a very authentic relationship with the people of Baltimore. She also attended a lot of events and made herself very present in their day-to-day lives.

Bernstein raised about $630,000 for his campaign, while Mosby only raised $200,000; but she didn’t let her financial situation discourage her.

“My main goals, first and foremost, are to go after violent repeat offenders,” Mosby said. “Those are the individuals who time and time again get off. It’s unacceptable.”

In addition to going after violent repeat offenders, Mosby also wants to work on the distrust that is present between the citizens and the judicial system, starting with the youth.

“That means getting to our children before they get to the criminal justice system,” she said. “Seeing kids in classrooms as opposed to courtrooms.”

She wants to implement programs were children get to spend time with lawyers, police officers and judges. She wants children to have positive interactions with people who work in law enforcement, so that they won’t fear them and know that they are there to help not hurt. She would also like to set up mock trials or activities where youth get an opportunity to see what it’s like to be a lawyer, judge or police officer, opening them to the possibility of someday working in law enforcement.

“It’s about exposure and experience,” she said. “We’ve got to be able to get to these young people before it’s too late.”

Mosby also wants to come up with a program for first time nonviolent felony offenders. Such people, she said, find it really hard to continue living their lives. They can’t apply for certain jobs, housing, schooling or financial aid, and before long, she said, they end up back on the streets. Her program would help them transition back into society with life skills and job training. At the end of a probationary period, they would have jobs that can help them better provide for their families.

“It’s giving people alternatives,” she said. “You don’t have to incarcerate everybody. The courts should be utilized for the worst of the worst.”

The things that Mosby is looking to change in the judicial system and in her community are things that she has witnessed either in her personal life or while doing her job. After seeing those things play out, she took it upon herself to try to make the changes that Bernstein and the prosecutors didn’t seem to be interested in doing.

“At the end of the day, you want people who share your experiences,” she said.

After campaigning for the past two years, Mosby is excited to finally near the time when she can get started. She has complete confidence that she will defeat Russell Neverdon, the write-in candidate who is challenging her, and she also has complete faith in her abilities and her relationship with the public.

She plans to spend the next two months traveling around the country to visit prosecutors’ offices to figure out different strategies that she can use in Baltimore.

“I want it to be all over and for it to be behind me – the election part, I mean,” Mosby said, adding: “But I’m ready to get the job done. This is my heart, this is my passion.”