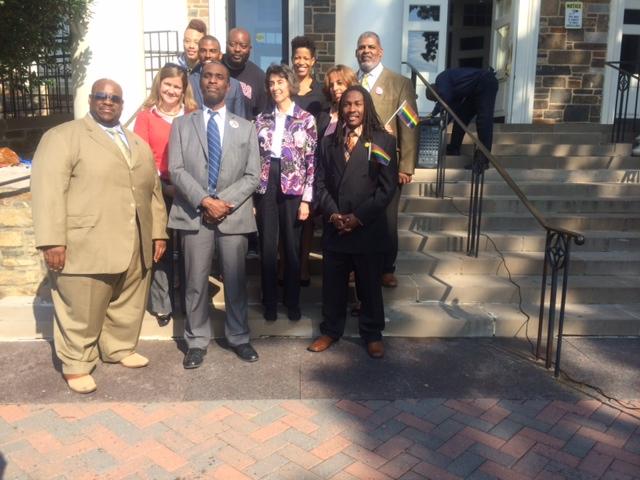 On Tuesday morning, the LGBTQA Council held Morgan’s first ever kickoff event and recognition of the observed national coming out day.

“It’s wonderful that we’re apart of this at Morgan and that we’re observing our history month, and the achievements on our campus,” said Elizabeth Gunn, cochair of the LGBTQA council.

National coming out day began in 1979 with the first LGBT rally in Washington, and LGBT month began in 1994 in Missouri.

LGB History Month was introduced by former President Bill Clinton in 2000 and Transgender was included by President Obama in 2009.

According to Kevin Banks, cochair of Morgan’s LGBTQA Advisory Council, the board meeting in November will introduce a non discrimination policy for approval, which will include Gender identity and gender protection as a class.

Morgan student and member of the LGBTQA council Brian Stewart wrapped up the statements. “Visibility is so important, because it reaffirms your identity in a community,” said Stewart.

“I have committed myself to the work, and what I see is that we’re progressing, he said. “One of the things I’ve learned on the board is that things take time. So it’s so nice to see that Morgan State University has the intent there.”

Stewart gained national attention last year after he filed a discrimination claim against Morgan’s Alpha Iota chapter of Kappa Alpha Psi Fraternity, Inc. He alleged that he was denied membership due to his sexual orientation. When text messages against him released, the university placed the chapter on probation until Fall 2015.

“We have a very diverse community, and so for people to feel comfortable in this place and this community.”

He also wants to push for students to become more aware of the LGBT community to help students feel more welcome and understood.

“Currently I think student support is poor, and I only think thats because of messaging and promotion,” he said.

“ I think that it shouldn’t be segregated in a way to that its just LGBT this and then other organizations, I think that it should be the same,” said Ian James, sophomore and member of S.E.X Me (Safe Experience Excite Me), a LGBT student organization aimed to help males practice safe sex. “By us coming together and being one unit {could} make us a lot stronger} to show support.

“I think that we have a lot of LGBT community at Morgan, but due to social stigmatism’s it’s not as prevalent as people think it is,” he continued. “A lot of people feel shadowed and closed in.”

S.E.X. Me was formed under the student counseling center. Through a grant, the group does HIV/AIDS prevention and risk reduction.

Check out our coverage of the LGBTQA panel discussion here.