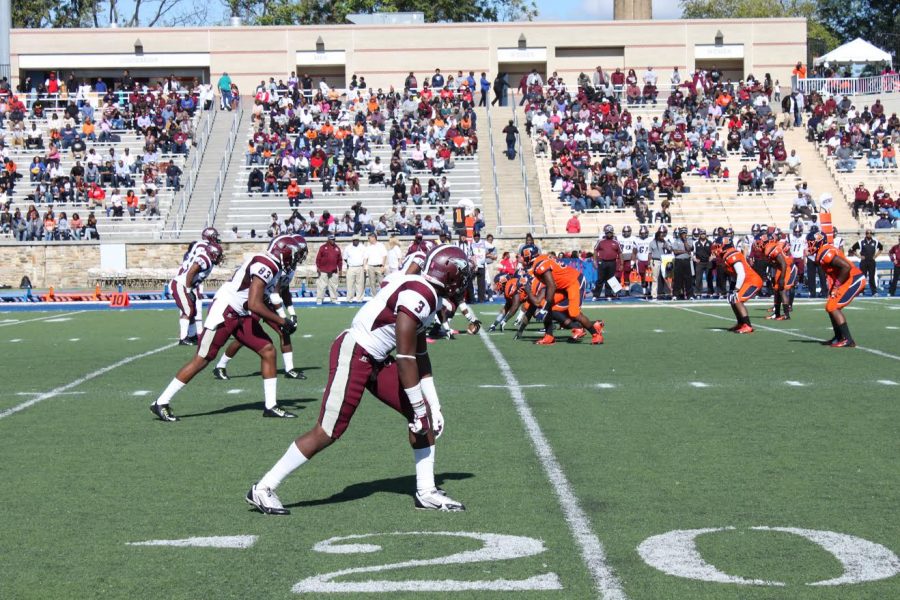 If anyone in Hughes Memorial Stadium said a prayer before the Bear’s final drive of the game, they were definitely heard and answered via a go-ahead touchdown pass with less than 40 seconds left on the clock.

Following an exciting six days of homecoming festivities off the field, it was only fitting for the Morgan State University Football team to produce a heroic come-from-behind 21-20 win against the visiting North Carolina Central University Eagles.

The Bears, coming off of a bye week, took an early seven point lead by turning an Eagles muffed punt into a nearly effortless eight yard touchdown run from quarterback Robert Council in the second quarter. However, the Bears proceeded to struggle at being effective for the next two quarters on both sides of the ball, allowing the Eagles to score 20 unanswered points.

“North Carolina Central’s a great team, and we knew it would be a hard fought battle,” said Head Coach Lee Hull. “They gameplanned for us.”

That gameplanning included holding sophomore running back Herb Walker, the Mid-Eastern Athletic Conference’s leading rusher, to 70 yards on the ground, forcing the Bears to rely on Council’s dual-threat abilities to put them in scoring positions.

Walker did manage to get into the endzone, bringing Morgan State within six points of NCCU midway through the fourth quarter. As the fans’ energy level increased with the possibility of winning in sight, senior defensive back Nathan Ayers roamed the sideline yelling, “The defense is gonna get this stop, then the O[ffense]’s gonna score.” The defense did their job, forcing a turnover on downs, but the offense suffered through multiple dropped passes to give the ball right back to NCCU.

Though the momentum was slowly slipping from MSU’s grasp, the defense once again pulled through, and a 44-yard field goal attempt by the Eagles that didn’t even make it halfway to the goalposts gave the Bears the ball with less than two minutes and 56 yards to go.

Bears executed on all cylinders as soon as the drive began, managing to make it inside the 20-yard line before using their final timeout in the midst of a fourth-and-two situation, which Council converted with a keeper to momentarily stop the clock.

Council was only 7-22 in passing on the afternoon, but the seventh and most important completion from 15 yards out to redshirt junior Andrew King was the exclamation point to an emotional comeback. “It was destined to me,” said King. The Eagles had one more chance for their own magic to work, but with no timeouts, their desperation plays failed.

“We just had to keep our composure,” the senior quarterback said in regards to the last drive. Coach Hull noticed the consistent man defense from the Eagles, “so that last play was a man-beater play, and it worked out for us.”

Saturday’s win put the Bears at 4-3 overall and in a three-way tie for second in the conference. Their next game will be on October 25 at Villanova.