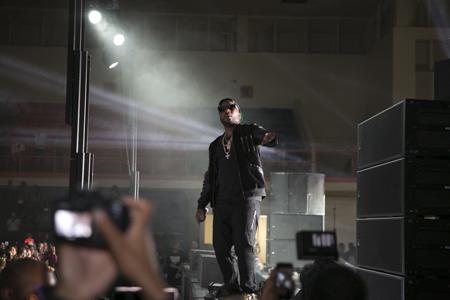 Amidst grumblings and disappointment from much of the student body, Morgan State University’s Homecoming concert managed to produce a nearly gym-packing audience for headliners YG and Young Jeezy on Friday.

A handful of nearby schools held their homecoming concerts the same night with seemingly more favorable lineups, forcing MSU had to fight for attendance from their own students as well as possible visitors. Nonetheless, over 1,300 tickets were sold.

The concert opened with performances by rapper and former student Kontrah and former Morganite, singer Justine Skye. Though the crowd received them with love, they were clearly anxious for the stars of the night to get on stage

YG was the first of the two to perform, coming out to “BPT,” from his debut studio album, “My Krazy Life.” Much of YG’s performance came from the album, which peaked at #2 on the US Billboard 200 and #1 on the Billboard’s Top Rap Albums. He also performed a handful of older songs including “Bitches Ain’t Shit” and “Toot It and Boot It,” the hit which subsequently lead to his signing with Def Jam Recording. In between songs, YG took time to address the crowd for call and response chants and small monologues, such as applauding all the students for staying in school and joking that he, “couldn’t do the school shit,” leading to him dropping out of high school.

Following YG, Young Jeezy took the stage to his throwback hit “Put On,” which reinvigorated the crowd that was previously growing tired from the pause between performances. Friday marked Jeezy’s second homecoming concert at Morgan, with the first being ten years ago, shortly before he took off as one of the bigger names in the south and the rest of the rap scene. Staying true to the nostalgia, Jeezy’s performance centered on many classics such as “Soul Survivor,” “I Love It,” and “They Know (Remix).” To end the show, Jeezy brought YG back on stage one more time so the duo could perform “My Nigga,” which won the Track of the Year and Best Collaboration just days before at the BET Hip-Hop awards.

“I loved the concert,” said freshman Business Administration major Khalil “Party Boy” Barnes. “Jeezy turned it up and so did YG.” Any disgruntled feelings with the lineup were not present in Hill Field House, as the crowd maintained a deafening level of noise through both main performances. “It was a breathtaking experience to be that close to some big name celebrities,” added freshman Broadcast Journalism major Ian Harpool, who felt that Morgan is “going in the right direction as far as bringing good acts here.”

As for those who opted to stay in or go to another school’s concert, senior Marketing major Troy Griffin, the UMOJA Council director, said “I feel bad for them if they didn’t get a ticket.”