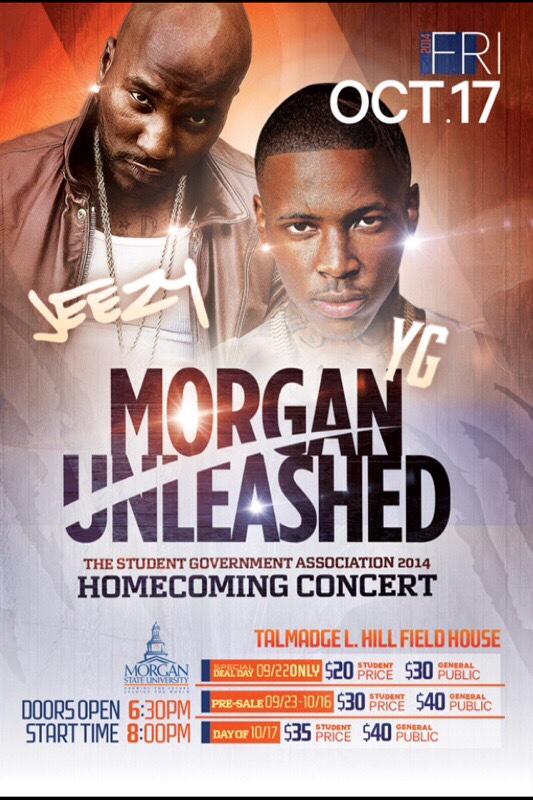 Trying to please over 7,000 people is like trying to count the number of stars in the universe. It’s something that’s very hard to do.

The UMOJA Council is responsible for planning the Homecoming Concert. They have to find out which artists the students want to see, get those artists to agree to perform at Morgan State and then make sure that those artists actually show up to do what they were paid to do.

YG, short for Young Gangsta, is an American hip-hop artist who originates from California. He is currently signed to Young Jeezy’s record label and one of his biggest songs, to date, is called “My Nigga” which features Young Jeezy and Rich Homie Quan. His is also featured on Jeremih’s song “Don’t Tell ‘Em.”

While YG has had some success in the music industry, he isn’t as well know as J. Cole and K. Michelle who all performed at last year’s homecoming concert. Students don’t dislike him as an artist; they just wanted a better-known artist.

“I’d be excited if Childish Gambino came, but I feel like I’m reaching,” said Jourdan Ash, a senior majoring in Print journalism. “But that would make me actually want to drop $30 on a ticket.”

Students have been comparing our Homecoming concert to those of Howard, Bowie and Delaware State because they have booked artists like Future, August Alsina, Elle Varner and Rick Ross. So not only are their performers well known, but they also have variety thorough out their concert.

According to Griffin, Morgan’s new event, Bear Fest, will balance out the Homecoming concert. Those who attend the Bear Fest will be able to see some local up and coming R&B artists. They will also get the opportunity to see some of their fellow Morganites, like singer/songwriter Maya Milan, perform.

“The concert is more hip-hop based,” Griffin said. “But, like I said, it’s also balanced out by this new event that we’ve introduced.”

At the beginning of the year, students had an opportunity to vote on whom they wanted to see during this year’s Homecoming concert through a social media campaign that the UMOJA Council introduced. The three most highly requested artists were August Alsina, Schoolboy Q and YG, but because Morgan State’s financial budget isn’t as large as some of the other HBCU’s, according to Griffin, the UMOJA Council wasn’t able to book those high profile artists, but it’s those artists who are luring students to other HBCUs or institutions.

“I thought about that too,” said Ash. “I was gonna go to Howard cause Howard has, like, a huge line-up of people.” But since Ash is graduating in Dec., her friends talked her into attending Morgan State’s Homecoming concert.

With the Homecoming Concert set for tomorrow and YG and Young Jeezy scheduled to perform, nothing can be changed.

“We tried our hardest to give the students a great week,” said Griffin. “Not just a concert, but a great week in general.”