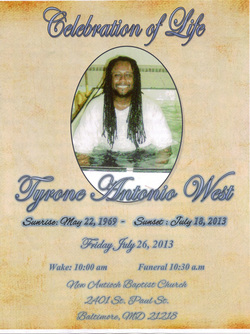 In the days after the medical examiner released a preliminary autopsy report on Tyrone West, a man killed in police custody almost five months ago, there remain more questions than answers in the case.

At an investigative hearing held at City Hall Wednesday, Councilmember Warren Branch admitted to a crowd of nearly 50 West family members and supporters that he was “still not entirely sure what [the autopsy] means.”

According to an official statement released by the State’s Attorney’s Office, 44-year-old West died from “cardiac arrhythmia due to cardiac conduction system abnormality, complicated by dehydration during police restraint.” The MSU Spokesman has reported that the medical examiner looked into whether West suffocated while being held by 10 police officers, including one from Morgan, in a position in which he couldn’t breathe. That was based on preliminary information that a source involved in the case had access to; in the end, however, the medical examiner decided not to single out one cause. Various medical experts suggest that a number of factors could have contributed to West’s medical distress, including the arrhythmia.

“Things that can cause it are a heart attack, a gunshot wound, trauma, beating, anything like this,” Dr. Jerald Insel, chief of cardiology at MedStar Good Samaritan Hospital, said on the Marc Steiner Show Wednesday.  “This is the end of a very traumatic episode.”

Shortly after the incident on July 18th, Council member Bill Henry offered an account to The Baltimore Sun. “‘It was essentially a wide-ranging fight across several yards,’ Henry said he was told by police. He said officers tried to pepper spray the suspect, but it ‘actually blew back and affected them as much, if not more.'”

The State’s Attorney, Gregg L. Bernstein, said “the manner of death could not be determined because of an inability to determine the absolute relative contribution of each of the described factors.” He said he would take the medical examiner’s findings under consideration as he continues his own investigation.

The actual autopsy report has not been released to the public. No one from the medical examiner’s office attended the City Council hearing.

Council member Henry said he spent the day researching to understand the cause of death in the report and complained, “Now, I’m a moderately well-educated and well-read person and I still wasn’t one-hundred percent sure what that meant.” He had questions. “Unfortunately, no one from the medical examiner’s office was willing to come in and put that in plain English for us.”

The floor was open to public testimony from West family members, supporters, and community activists. They expressed grief, frustration, and dissatisfaction with the on-going investigation and the incomplete autopsy report.

Through heavy sobs, West’s mother, Diane Butler, told council members and Baltimore Police Department representatives that she has grown afraid of the police and doesn’t know what to do.

West’s sister, Tawanda Jones, wondered why the full autopsy report was not being released and said to council members, “Don’t give me half the story. Give me the entire thing.” She knelt down on the floor of the chambers, folded her arms and begged for help from the police representatives in the case of her brother. “If you don’t do anything for my family, get us justice please,” she said.

City Council members complained that such a time lag—almost five months have passed since West’s death—surely hinders an investigation because memories are not as fresh.

Rodriguez acknowledged Maryland’s Officer’s Bill of Rights was different from other states, which did not preclude such interrogations. But he assured council members that the case would not be dropped. “Once we interview the involved officers, we will complete the investigation,” he said. In a worst-case scenario, the investigation could drag on another three to four months, Rodriguez said.

Skinner said that if the officers are charged, they are entitled to the same rights as any regular citizen charged with a criminal offense.

At Morgan, police officials refused to speak with The Spokesman about how a campus officer came to join with Baltimore City police in arresting West in the 1300 block of Kitmore Road, and what his role was in restraining West.

Police Commissioner Anthony Batts repeated to council members a pledge he made in October at a community meeting at Morgan: to rely upon an independent outside committee to review the case.  “We take these events very seriously and will continue to be transparent and continue to search for truth and facts.”

As the evening progressed, community activists and members of the NAACP, including the organization’s president, Tessa Hill-Aston, spoke on the West family’s behalf.

Members of the audience called for reform in the Baltimore Police Department and some suggested there was as a cover-up of the facts surrounding West’s death. However, the family and their supporters said that they remain confident the truth will surface.

“My family is not going to rest,” said West’s cousin, George Peoples Jr.