Underneath the Ink: A Tattoo Artist Memorializes the Moment 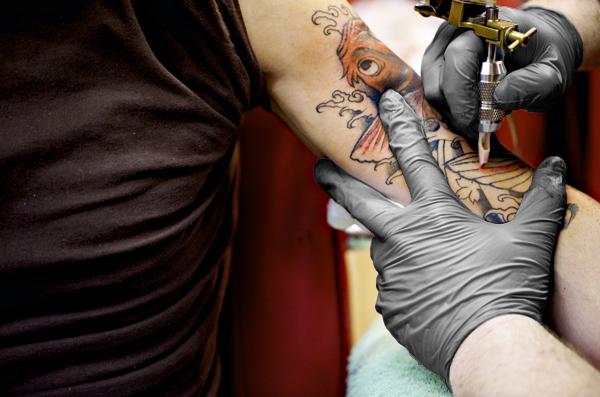 he piercing sound of a tattoo gun echoes throughout the private room of award winning tattoo artist Chad Miskimon. He is in his element, as the faint sounds of The Beatles can be heard in the background and a Die Hard movie plays on the mounted plasma TV.

Suited up in what he calls his daily work uniform, which consists only of a pair of black latex gloves, Miskimon goes to work on his first canvas of the day, former U.S .Army soldier Marc Friend. Friend lies on his stomach on the black leather chair with his face contorted in a mask of pain. Miskimon is relaxed and at ease. He is used to the moans, groans, and flinching—all in day’s work. Friend takes his mind off the pain and the fact that a needle is piercing his skin a thousand times per minute by telling Miskimon the story underneath the ink.

“Iraq was hard man,” Friend begins. “I saw a lot of things that I wasn’t mentally prepared for. Seeing the dead bodies of men, women, and children is hard to digest, especially when you know that you contributed to the carnage under orders.”

Friend pauses to adjust his body and take a deep breath from the nagging pain of the needle, or perhaps from the dormant memories resurfacing from Iraq. He was deployed twice, once in 2004-2005 as part of the 5th Infantry Regiment of the 125th Stryker Brigade and again in 2007-2008 as a part of the 2nd Stryker Cavalry Regiment. Already, he has two tattoos to symbolize these terms in Iraq. One on his right arm, which is a cross with the words “I came, I saw, I conquered” written in script that he got when he returned home for the first time. The other is on his left arm. Here he has a set of praying hands as a symbol of faith in god to watch over him during his second stint in Iraq.

However, this new tattoo that Miskimon is skillfully crafting onto Friend’s upper back holds more meaning to the former solider than any other tattoo that he has.

“It’s called a soldiers cross and it represents all the honorable fallen soldiers I know and don’t know,” he says. “It’s a symbolic replacement of a cross on the battlefield when a soldier dies. It’s quite simple but powerful. A M4 rifle is placed inside a soldier’s combat boots with the helmet on top of the rifle forming the battle cross.” He pauses, squirming as Miskimon starts line work on a sensitive area. “It’s something I always wanted to do. It’s for my friends that became more like my family on base that I can’t talk to anymore.”

ontrary to what some people believe, tattooing has become a cultural phenomenon. It is a means of creative expression that shapes a person’s sense of identity. Today one in five adults has at least one tattoo. There are some people who get tattoos just for the heck of it. Some claim tattooing as an addiction and are determined to ink up every inch on their body. However, for most people tattoos hold specific meaning. The images evoke an emotion, honor a memory or preserve an important life experience.

“For some people getting ink has become a lifestyle,” says Miskimon, “I have regulars like every paycheck that are in my chair. Yeah, some tattoos can be downright meaningless but tattoos that serve a purpose by honoring a fallen loved one, symbolize love, or an important moment in someone’s life… Those are the ones that I enjoy doing the most.”

Take it from an expert, Miskimon has seen it all and done it all when it comes to tattoos. Born and raised in Baltimore, MD, he is a tattoo industry success story. He is an award-winning realism artist, first-place winner of Small Color Tattoos in the 2013 Skindustry Expo, first-place winner in Best Hand in the 2011 Baltimore Tattoo Arts Convention, and has also received recognition for best portrait tattoos in 2011 and 2012. Miskimon has been featured in magazines such as Tattoos for Men Magazine, Total Ink Magazine, and Skin Shots International among many others.

“Well for me tattooing started off as more of a hobby and overtime developed into a passion,” says Miskimon, flipping through a portfolio of his earliest work. In the thick leatherette book there are many samples of his work, ranging from an Edgar Allan Poe portrait tattoo to a Batman and Robin sleeve tattoo.

Miskimon has a few tattoos of his own but the one that is most meaningful to him is a large fishing hook that takes up the majority of his left leg.

“My grandfather and I use to go fishing a lot. It was never really one of my favorite things to do but I just did it for him to make him happy, you know? He had a hard life. He was an alcoholic and battled a serious drug addiction but he was a good guy. Before he died of liver cancer in 2003 he told me to go full force with my tattooing talent. So I did.”

lisa Crews didn’t get the chance to meet her unborn child. What she thought to be the perfect pregnancy was shattered on May 12th, 2013, when she delivered a stillborn baby. Today she sits in Miskimon’s chair in good spirits and wearing a bright smile. In her hand, she holds a birth certificate. She is nervous; her legs haven’t stopped bouncing since she sat down in the chair and she constantly wipes her hands on her denim jeans. Miskimon does his best to put Crews at ease by placing a reassuring hand on her shoulder. Crews nods that she is ready and Miskimon revs up the tattoo gun.

“I’m still in shock today,” she says. “I can still hear his little heartbeats and feel him moving around inside me like a little busy body. I mean I try to stay positive but I can’t ignore this hurt feeling that has been weighing on my heart for five months now.”

Crews drifts off as Miskimon starts the first line of her tattoo. In memory of her baby boy, Tristan Alvin Myers, she is getting the image of his footprint with angel wings and a halo on her right arm. Underneath the footprint is the baby’s name and would be birthdate.

“We just had the baby shower two weeks before my due date. Everybody was ready for Tristan’s arrival. I had the nursery pretty much finished but my family and friends were very generous with all the gifts,” she says. Crews began to tear up but doesn’t let the tear fall. “I had his stroller, car seat, bassinet, tons of clothes, pampers, and adorable little baby toys. I was so happy that day because I knew that two weeks later I would be bringing my little man home.”

It took a while for Crews to gather up the strength to get the tattoo with memories of her pregnancy constantly replaying in her mind. When Miskimon finally finishes the tattoo, Crews can’t hold back her tears any longer.

“It’s beautiful,” she says. “I hate the fact that I had to say goodbye before I even got to say hello but at least I know that my little angel will always be with me.”

attooing has been practiced for centuries in many cultures. It is a part of an ancient and universal tradition of human self-decoration and expression. The negative connotation of tattoos comes from the Bible when God placed a permanent mark on Cain after his atrocious acts towards his brother Abel. As in the Bible, the Greeks, Romans, and Japanese would tattoo criminals, slaves, and undesirables. Tattoos also marked clan membership, religious or tribal affiliation and social status. In Ancient Egypt, tattooing spread rapidly as it was used for ritualistic purposes like mummification.  In Japan, the full body tattoo was practiced which showed scenes of legendary battles with mythical heroes and warriors that had creatures surrounded by highly stylized waves, wind bars, flowers, cherry blossoms and peonies.

In modern times, tattoos in Western culture were reinvented and popularized by sailors and criminals. In the 1970s and 1980s tattooing techniques were improved and followed the blueprint of the Japanese with vivid color, imagery and the idea that the body is a canvas. This thought propelled the American tattoo from a primitive state to a credible art form.

Now tattoos aren’t as taboo as they once were and it is more accepted and popular than ever before.

s the day begins to come to an end, Miskimon awaits his final appointment. He cleans and sets up his workstation again for the third time preparing to do his favorite style of tattoo, the portrait. He already has a photo of the person whose image he is recreating. It’s 17-year-old Derrick Wingate who was shot 10 times in front of his home in a robbery gone wrong. Moments later, his client, Marcus “Smiley” Dunley, arrives.

“I’ve been waiting all day to get this tattoo,” he says, removing his shirt and plopping down in Miskimon’s famous black chair. The portrait is a going to be placed on Smiley’s chest right above his heart.

“My brother was my keeper. It was f #*ed up how they took my brother’s life like that,” Smiley says with a face of disgust but a soft voice revealing his true pain. “His girl was seven months pregnant. Man, he was about to be a father. The night he was killed was just tragic for everybody. He was shot in front of his girl, on the day of his twin sister’s second birthday, in front of his house while the birthday party was going on. It was hard for everybody to stomach what had happened that day.”

As Smiley talks about his fallen brother, he goes through a range of emotions. At one point, Miskimon had to stop to calm Smiley down. It was important for Smiley to remain calm, cool, and collected while Miskimon worked because portrait tattoos require a lot of details.  It took approximately three and half hours to complete the tattoo. After the seemingly long process, Smiley was extremely satisfied with the portrait of his brother.

iskimon removes his black latex gloves and places his hands on his hips, “another successful day,” he whispers to himself. For the last time of the day he sanitizes and straightens his area. He makes a note to add his new creations to his portfolio the next day.

“I love what I do. I love using people as my canvas to create the things they want on their body,” says Miskimon. “My clients today had some very powerful stories and I feel it’s actually an honor for them to want me to tattoo them. I am a tattooist, and an artist but most of all I am a human and I can feel their stories. After all that’s what tattoos are meant to do, tell stories.”

More often than not tattoos carry meaning. The next time you see a person with a tattoo, look deeper. The story underneath the ink may be more powerful than you think.