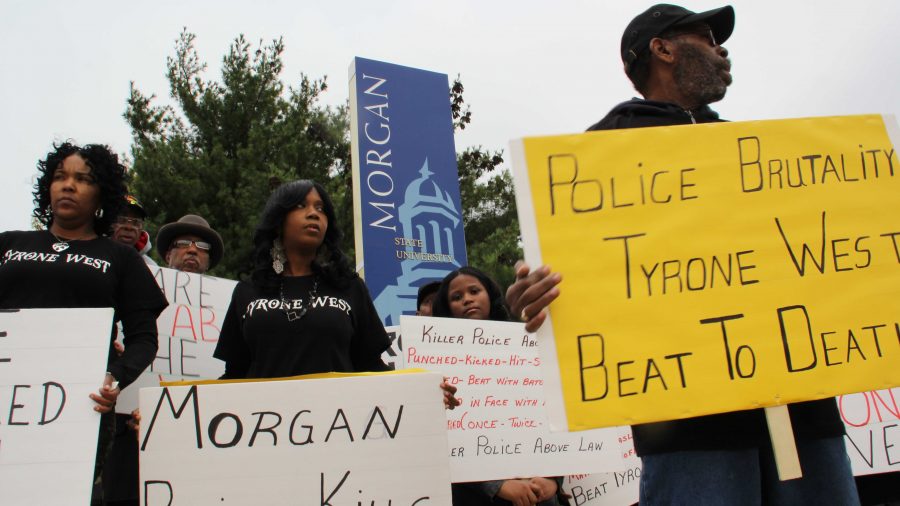 Autopsy results for Tyrone West, who died in police custody five months, ago reveal that he died of “positional asphyxiation,” according to a source familiar with the case.

Witnesses to the incident and West family members alleged that officers from the Baltimore City Police Department and Morgan State University beat West to death after a traffic stop in Northeast Baltimore last July. However, the autopsy found he suffocated while being held in a position in which he couldn’t breathe.

It is unclear which officer was responsible for holding West.

Since the death of their loved one, the family, led by West’s uncle George Peoples, his cousin Jamie Richardson and his sister Tawanda Jones, has spent over 130 days advocating for the release of the autopsy report and information about the case. They’ve protested, had meetings with council members and the Mayor, and have had countless interviews with the press.

“We are going to continue doing this until we get some answers,” said Peoples, while attending a demonstration at City Hall.

Only recently has the family begun to see the efforts pay off.

“I write urging you to work expeditiously to provide the public with a prompt and transparent determination of the events that occurred surrounding this incident,” she wrote.

This Thursday, the City Council will hold a hearing to further discuss the progression of the case.

For the West family, July 18th was just another ordinary day. George Zimmerman had just been found not guilty in the murder of Trayvon Martin, and the verdict was still the buzz on the streets and the topic of conversation between West and his sister.

“‘We have to be careful. There’s Zimmermans on every corner.’ That was the last thing my brother told me,” said Jones, remembering the last time she saw her brother alive. After their talk, West borrowed Jones’s green Mercedes Benz E 320 to run some errands.

That evening, after several failed attempts to contact West, Jones turned on the television and saw her green Mercedes and her brother’s dead body lying next to it on the evening news. Confused, shocked and distraught, she went into a frenzy of grief. But even before seeing the television she knew something horrible had happened because no one was able to contact him, she later recalled.

West was stopped for a routine traffic violation, according to the family. Witnesses told the Baltimore Sun he did not resist arrest and was sprayed with pepper spray or mace. Police began beating West while he screamed for help and tried to escape.

During the incident, West fell to the ground, lost consciousness, and later died. It was later reported that nine city police officers from the Violent Crime Impact Section, as well as a Morgan officer, were involved. However, no officer has been charged, and they all remain suspended on paid leave.

Since the death of West, his family has found little reassurance from law enforcement until recently. Instead, they have found some comfort in being able to share and express their grief with people like the Anthony Anderson family, who know all too well the agony of losing a relative in a confrontation with police.

According to the Sun, on the evening of Sept. 21st last year, at approximately 7:20 p.m., three Baltimore City police officers set out to arrest Anderson for making a drug deal in front of OK Liquors on East Biddle Street. One of the officers, Todd Strohman, also a part of the Violent Crime Impact Section, forced Anderson on the concrete by picking him up and slamming him to the ground. Anderson, slumped over and with shallow breath, was taken to the hospital, where he later died.

Less than two weeks later, the state’s assistant medical examiner, Zabiullah Ali, ruled Anderson’s death a homicide due to blunt force trauma of the torso. Anderson suffered multiple rib fractures, lung contusions, and spleen lacerations which caused him to bleed to death internally. The examiner’s report was consistent with the witness statements of those who saw the incident and said that the police had slammed Anderson to the ground.

Four months after Anderson’s death, Baltimore prosecutor Gregg Bernstein announced that the officers involved would not be prosecuted, after finding that Strohman had used appropriate force when he slammed Anderson to the ground.

The Anderson family says that what’s been done so far is not enough. They have recently filed a multi-million dollar lawsuit against the Baltimore City Police Department.

Members of the West and Anderson families met for the first time in August in an empty lot at the intersection of East Biddle and North Montford Street, the same place Anderson was killed. Community activists, supporters and friends and family of Anderson threw a community barbecue to celebrate what would have been his 47th birthday.

The families exchanged their condolences for each other’s loss, and apologized for having to meet under such sad circumstances. West’s aunt, who he considered his mother, Diane Butler, and the mother of Anderson, Edith Fletcher, embraced each other in grief and understanding. Fletcher patted Butler on the shoulder, silently acknowledging the pain over the loss of their sons.

“I’ll never forgive them,” Butler said of the officers involved in the death of her son.