The Champions Return Home: City Pride Second to None 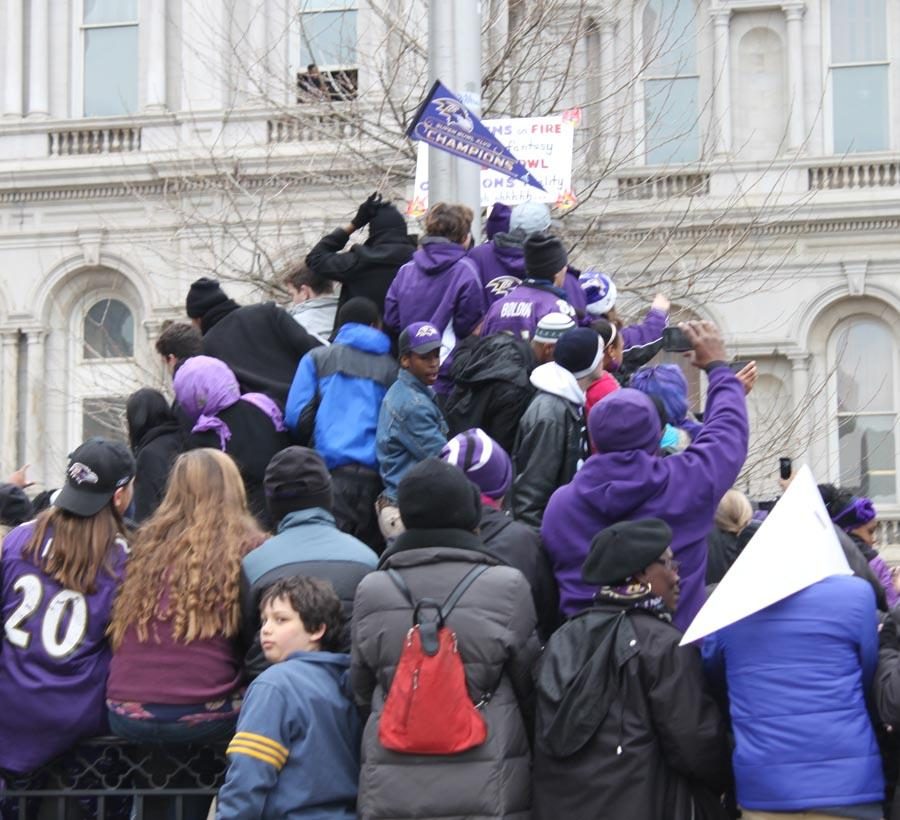 On Tuesday morning, the Super Bowl Champions  returned to their home city where it all began and were welcomed by tens of thousands along a parade route and 80,000 fans who crowded into the stadium for a victory celebration. The Ravens were back in Baltimore and the city could not be happier.

The parade was slated to start at City Hall at 10:45 a.m. but traffic was so heavy it was delayed by more than an hour later. Before a single player arrived at the City Hall, thousands of fans were  already waiting outside, hoping for a glimpse. Once the team arrived the crowd went crazy. There were people in the streets, in the nearby parking garages, and even in the business buildings watching from their work windows. The atmosphere was electrifying and the love that fans lavished on the entire team was second to none.

Every one in the atmosphere was so full of life, not just the fans but also the players. Super Bowl MVP quarterback Joe Flacco shared kindhearted words with his city. “We’ve been through a lot of highs this year and some lows, too,” Flacco said. “But you guys stuck with us. Thank you.”

The crowd celebrated their hard working quarterback, who proved to the entire NFL league that he was ready to be labeled an elite quarterback. Flacco threw 11 touchdown passes without an interception throughout the playoffs. He already had the support from his organization and fans but bringing home this Lombardi Trophy, he demanded respect from the rest of the non-believers.

Just when you thought there was no way it could get louder, every one begin to scream and cheer when someone came from inside City Hall. Who was it? As most in the crowd strained their necks to see, Ray Lewis himself stepped to the podium to share a few words of appreciation. “Baltimore! There is nothing in the world, there is no place on this earth that is better than Baltimore,” Lewis said. “This city, this city, we believed in each other from Day One, from 1996 to now.” As fans cheered, he raised the Lombardi Trophy in the air.

After the players spoke at City Hall, the parade began. Riding in trucks, cars and floats, the players smiled and waved as fans expressed their love for the team. As the parade made its way downtown thousands of people in the streets began running with the floats.  At one point, Ravens WR and FS Anquan Boldin and Ed Reed left their vehicles to allow fans to touch the Lombardi Trophy. The gesture highlighted the relationship that these players have with their fans.

After the parade, there was a victory celebration in M&T Bank Stadium where all fans were welcomed to celebrate with the team and made it clear what one sport could do for a city. Laron Bradley, a Baltimore native and big Ravens fan, understands what something like this means to his city. “The Super Bowl win was very important to the city, because it brought Baltimore together like never before,” Bradley said. “I don’t think anything else can do that for the city.”

Indeed, the pride that was shown throughout the entire city of Baltimore was tremendous. This Super Bowl win was more than just a trophy to this city, it was a light at the end of a tunnel that many people thought was dark.

Although the parade was a day full of joy, it was a bittersweet day as well. This was the last time the City of Baltimore would see Ray Lewis as an active Baltimore Ravens player. Lewis has been with the team and city for 16 years, and knows what this meant for his fans.  He will finish his career as one of the best to ever play the game of football. What he has done for the game and the city cannot be overlooked. “The city of Baltimore,” Lewis said, “I love you forever and ever and ever and ever.”