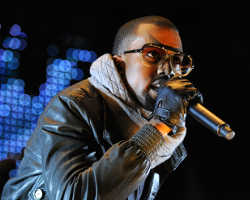 Kanye West’s Yeezus tour isn’t just any concert where an artist and their band play to the crowd and then everyone goes home. As many adjectives as I can use to describe this show, and there is a lot, they diminish the actual entertainment value that this show has. West put on a show that leaves you in awe.

To put into perspective of how monumental of an artist West is, he had Kendrick Lamar, probably the hottest MC in the rap game right now open for him. Lamar performed hits from his platinum selling album Good Kid M.A.A.D. City Poetic Justice,” “Swimming Pools (Drank),” “Bitch Don’t Kill My Vibe,” “Backseat Freestyle” and “m.A.A.d city.” Lamar amped the crowd when he brought DMV native Wale to the stage. The Cali native payed homage to the state’s most notable rapper late Tupac Shakur, playing his well-recognized song “Hail Mary”.

The lights dimmed, the crowed roared and out came West to the opening track from his sixth studio album “Yeezus,” titled “On Sight”.The show began to pick up with excitement as he performed hit after hit from all six of his studio albums and other projects., including “Jesus Walks,” “Through the Wire,”  “Diamonds from Sierra Leone,” “Stronger,” “Flashing Lights,” “Coldest Winter” and “Power”. The song transitions fell in line and flowed effortlessly with his story telling.

West performed acts for each part of his show that we can infer were closely related to his life experiences, titled Fighting, Rising, Falling, Searching and Finding. Not only did West performed a great rendition of his song “Runaway,” and in true West fashion he gave one of his infamous “rants.” West says he wants to push the innovative envelope for society. He believes corporations marginalize him by not being allowed to produce his own ideas.  The chi town rapper admitted he views himself as a genius. The mogul proclaims victory to make a better life for his family, and with sellout tours like this he will.