Video Americain to Shut its Doors After 30 Years 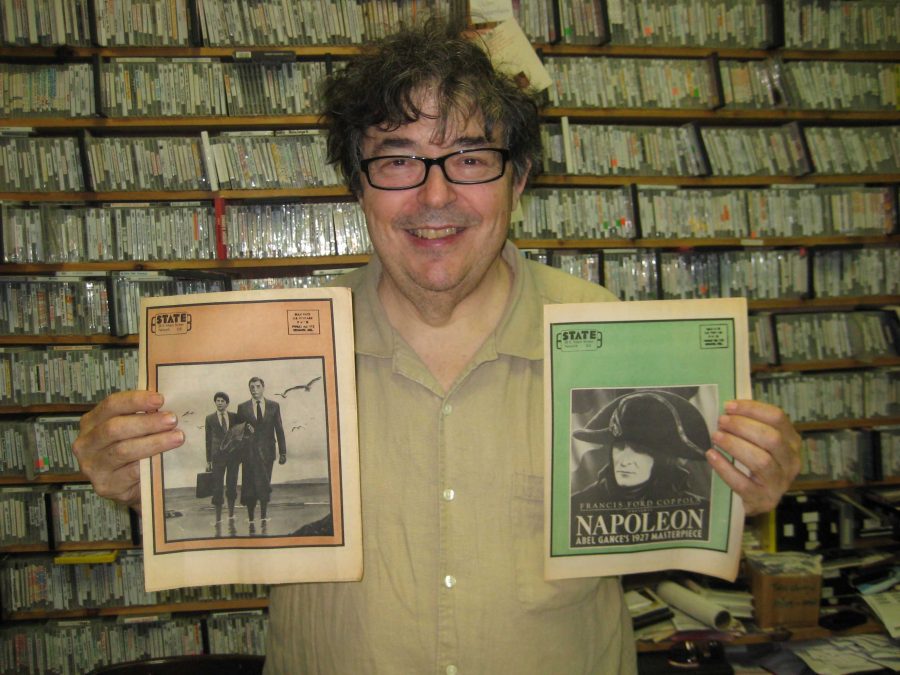 In a frenzy to find a copy of Beasts of Southern Wild to display to her class at University of Maryland Baltimore County, Erica Taylor made her very first visit to Video Americain on October 8th 2013. She ended up spending a half hour talking with the owners of the store about academic careers, bad diet habits, funeral customs and the differences in upbringing between Jewish and African American families. Barry and Annie Solan, proprietors of Video Americian, have a magnetic charm that makes it impossible for customers to just pick up and drop off movies-but after more than 30 years the owners are closing up shop in January.

Sitting by itself in a lot on Charles Street in Roland Park, Video Americain is more of a hangout for movie lovers than a video rental shop.“The best [store] in the country is in Seattle, then you have brilliant ones in Norfolk and Dallas,” says Barry referring to video store rankings.”But this is about, I would guess, the ninth to eleventh best in the country.” Countless plaques on the wall from the Baltimore City Paper, name Video Americain“Baltimore’s Best Video Store” 21 out of 25 years.

Upon entering, patrons are greeted by first name, and asked about their families or how things are at work. They’re told that their rentals are two days late, but that they won’t be charged any fees. However, customer appreciation and familiarity are just the icing on the cake. The store itself is the real draw; the old fashioned candy dispensers; the area where films are categorized by director; the Disney room with Little Mermaid, Mickey Mouse and Snow White pictures; the foreign section with an individual shelf for each country, including France, Russia, Scandinavia and Ireland. Even the comedy aisle is divided by viewer’s taste. One shelf is labeled “Romantic Comedy/Warm & Fuzzy.”

Despite its popularity, Video Americain will close its doors for good sometime in Januray 2014. Netflix and Redbox put major retail chains like Blockbusters and Hollywood Video out of business. It was only a matter of time before mom and pop operations like Video Americain suffered. According to the New York Times, Netflix pulls in 90 percent of online video streaming. According to the NPD Group, a global market research company, there is a Redbox machine at over 34,000 locations nationwide, and they account for 48 percent of the physical copies of movies being rented.

The Solans have owned six video stores in the Maryland-D.C. area over the past three decades. They have had to close all of them in the past five years, except for the Charles Street location. And now, the days there are numbered.  Annie Solan says their collection is still valuable and the community is attached their shops. “When we closed the Charles Village store, [John] Hopkins bought  two-thousand movies.”

Ned Boyle, who was making his weekly visit to Video Americain with his wife Rebecca, says the closing is a loss for Baltimore film lovers. “There’s a human element to coming here. You lose that with the impersonal world of downloading movies,” says Boyle. “Plus, you have the employees here, with all of their interesting personalities and different temperaments. It creates a real dynamic environment.” Like everyone else who rents movies at Video Americain, Boyle hopes the impending closing is just a bad dream. “I ‘d like to see them hang on. Maybe someone can step in and save the day, like they did for the Senator Theatre. This place is unique. It’s like the last buffalo. So I’ve repaid  their being here by being a loyal, long-time customer.”

However, the Solans aren’t fighting the change. According to Barry Solan, it’s long overdue. “The whole 30 plus years of the video business was a fluke,” he says. “It wasn’t supposed to happen. One studio had license to sell a small number of films. Then some studios, especially Disney, realized people really want these movies. Other studios went to the Supreme Court and tried to take the right to rent movies away, because you couldn’t rent a book or LP. So they tried to have renting movies rescinded, but the Supreme Court said the cow was already out of the barn.” The business has served him well.  “I got my working years out of it, thank God for that. I couldn’t ask for more. I didn’t come to the work place with many skills, but I always loved movies. I remember going to a Hughes Corporation video convention 20 years ago. They said, ‘this business is literally done, give us your keys now.’ Twenty  years later, Hughes went out of business, and video stores are at least still hanging around.”

But die-hard supporters of Video Americain won’t be completely cut off. The Baltimore Video Collective (many of whom were once employees at Video Americain stores) and the Maryland Film Festival committee are fundraising to purchase a half or two-thirds of the store’s merchandise. It will then be made available to the public through other means. “It’s more gratifying to have the whole archive moved as a group,” says Barry Solan. “It indicates that the twenty-five years we’ve spent collecting has been worthwhile.”

Either way, Video Americain will be greatly missed as a landmark of film culture, a mecca for true movie lovers, and a place where customers feel appreciated and have a special attachment. Barry Solan remains optimistic about life after the store and is at peace with its closing. “I’m fine. I’ve run my own business for 39 years. I’m ready to relax a little. I never made a fortune, but I earned a living and I put my kid through school. By that criteria, I’m at the right place.”