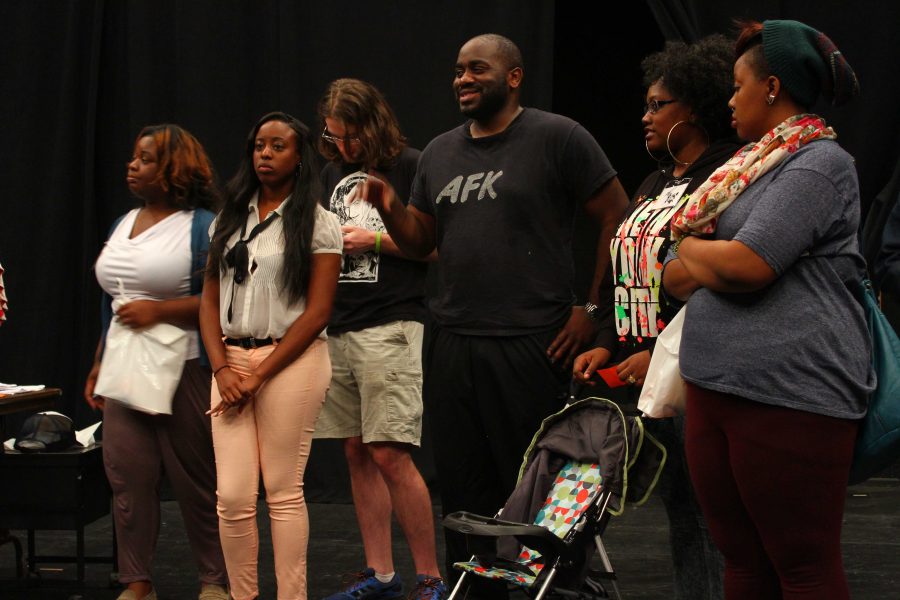 All eyes are on Deletta Gillespie, the Morgan State University advisor of the PlaySlam as she reaches into a bag filled with possible themes for each play’s basis. She smiles a little, as though the power bestowed on her at the moment is bringing her the slightest amount of joy. The seconds feel like hours as David White, the Towson University advisor, announces the theme.

“Glass,” he says with a beaming smile.

No one bats an eye or looks even momentarily stumped or unnerved. In fact, a combination of whoops and cheers fill the air. The group of young actors, directors and playwrights representing both Morgan and Towson gladly welcome the challenge.

“With glass I expect more drama,” says Wilton Howard, a senior history major and playwright from Morgan. “You can go so deep with that.”

This is a pivotal moment in the PlaySlam process. PlaySlam is a kind of extreme theatre where drama students from Towson University and Morgan State University spend 24 hours writing, directing, rehearsing, designing, producing and performing six one-act plays. With “glass,” the direction has been set and the six writers, Howard, Dominique Butler and James Hayes-Barber from Morgan and Steven Barroga, Linus Owens, and Brandon Scott-Boyd from Towson each draw a director’s name. The excitement rises as the Playslam begins to take shape.

At this point, a table boasting an arrangement of props, including a spoon, a stroller and a black nutcracker dubbed “the equality nutcracker” by Howard’s director, Timothy Huth, becomes the focal point as White describes their purpose. Each playwright-director pair randomly chooses their prop from a bag. After a few comments about the random spoon that writer Barber and his director Caitlin Weaver chose for themselves, the actors, who brought headshots and resumes, are selected in the same manner.

After choosing the actors, pizza arrives to the sound of a rousing round of applause. All participants gather their food and break off into their respective group to get better acquainted with one another.  A master class on the motions of Anna Kendrick’s “Cups” also known as the cups song from the 2012 film Pitch Perfect, breaks out in Butler’s group.

At 10 p.m. White takes the floor and the actors and directors are sent home with promises of search parties if they miss their 8 a.m. rehearsal time the next morning. Now, the real work begins for the playwrights who will spend the next 10 hours writing their plays from scratch.

This PlaySlam collaboration is the two-year-old brainchild of White and Gillespie. For the past five years, White has been in charge of the PlaySlam at Towson. The inaugural performance of Morgan’s involvement in the event will be held at the Murphy Fine Arts Center on Morgan’s campus, tonight, September 28, at 8.