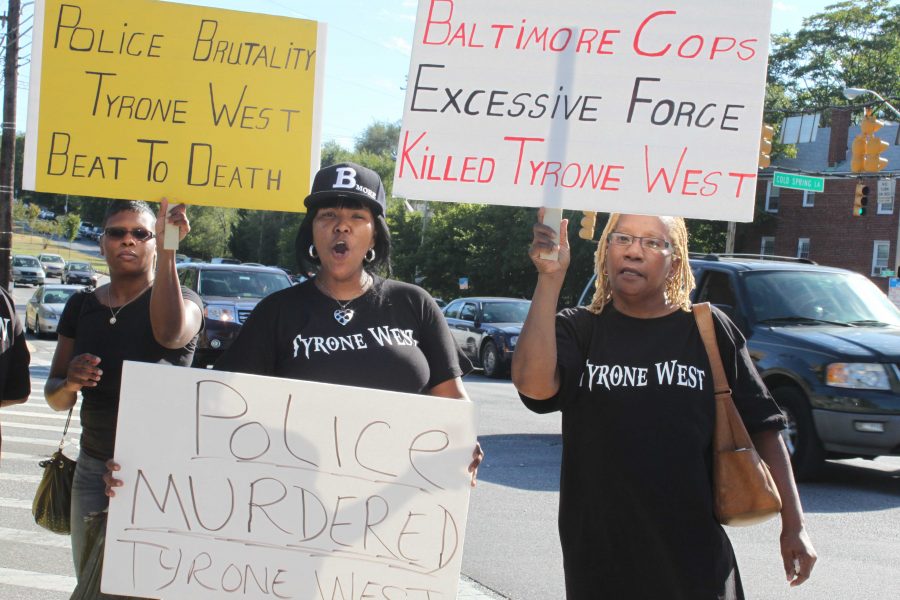 Family and friends of Tyrone West, a 44-year-old man killed in what they and witnesses say was an incident of police brutality protested on Cold Spring Lane near Morgan’s Jenkins building on Sept. 4. They called for justice.

West was pulled over at a stop light for a traffic stop in Northeast Baltimore on July 18 when police allegedly tried to search his car for drugs. An altercation occurred and witnesses told the Afro-American newspaper that police beat West. Eight Baltimore police officers and one Morgan State officer were involved in the incident. They have been suspended with pay.

A group of 13 held signs and chanted, “Tell the truth and stop the lies, Tyrone West didn’t have to die.” They also warned: “His family today, your family tomorrow.” Organizers said they hoped to raise awareness of the West incident with Morgan students, faculty and bypassers. Since West’s death, every Wednesday family and friends, SCLC and activist organization Baltimore People’s Power Assembly rally in different areas of the city against police brutality and to bring exposure to the matter.

Sherelle Ricks, a Baltimore resident and member of the Baltimore Chapter of the Southern Christian Leadership Conference (SCLC ) joined the protest to fight those in authority that brutalize citizens. “They can commit crimes and not be held accountable to their actions, but if a black man with no authority kills someone else they would be prosecuted,” said Ricks. “The same should be held for cops who kill innocent people.”

Ricks referred to Baltimore as a city without a conscience and hoped that, through the protest and petitions the group has circulated, West’s death could change that. “I have nieces and nephews, I have a son and I want them to live in a better environment than what’s going on right now.” Reverend C.D. Witherspoon of SCLC filed a complaint with the Justice Department for Tyrone West and the trauma death of Anthony Anderson, another incident held in police custody.

Barry Dunn, a friend of West’s and fiancé to the victim’s sister wants to alert Morgan students about the campus officer involved. “We just want justice as far as the Morgan police who murdered him in cold blood,” said Dunn. “He had no weapons he wasn’t armed or anything. We need your support,” he said referring to the Morgan community. Morgan Police cannot comment on the campus officer  because the case is still being investigated.

Medical examiners have yet to report on the cause of West’s death, but witnesses lead family and others to believe it was due to brutality. “I thought someone was beating the guy up so I thought I should say something,” witness Chuma Obineme told the Afro-American. “I saw batons shoot up in the air and three officers were punching and kicking him.”

Deputy Commissioner Jerry Rodriguez, the overseer of the Police Department’s professional standards and accountability bureau told civilians in an interview with The Marc Steiner show  that misconduct is not approved or supported by the police department.  “I encourage any and every member of society within Baltimore city that has had anything less of an experience to make contact with my office within the internal affairs and report it,” he continued. “That is how we will affect change.”

A. Dwight Pettit, an attorney representing the West family told the Marc Steiner show that he has been a victim and onlooker to unfair treatment during traffic stops. “Many times we’ve seen these stops are bogus stops for other purposes,” said attorney.

Deputy Commissioner Jerry Rodriguez said the police department works to benefit the community, but traffic stops are necessary. “We’re guided by state and federal law in any enforcement that we do.”

Senior education major Angela Alston was not aware of the West incident until a few days later. “Their voices captured my attention,” said Alston. “I felt like they were really trying to seek justice which definitely makes me want to research about this later.”