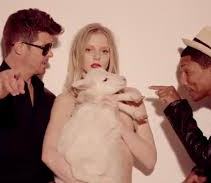 Take a look at the top five songs that have gained approval nationwide for the past weeks.

1) Robin Thicke feat. T.I. and Pharrell Williams- “Blurred Lines.” Peak position:1 Weeks on: 13. Soulful singer Robin Thicke and multifaceted musician Pharrell teamed up to create a hit that’s gained attention from just about any music genre fan. Maybe it’s because of the mixed pop, jazz and 1950’s rock and roll funk style the song gives. Thicke faced controversy over the video and how it appears he objectifies women, but the remarks in no way affected him from domination the U.S. charts and becoming the second song in UK to sell 1 million.

2) Daft Punk and Pharrell Williams- “Get Lucky.” Peak position: 1 Weeks on: 13. This song would fit in perfectly for a Friday night 70’s disco playlist. Get Lucky has been a great first album single return for electronic group Daft Punk, who’s last album was in 2005. So great that Durex condoms has released a “Get Lucky” pack, with Daft Punk and Pharrell on the cover.

3) Miley Cyrus- “We Can’t Stop.” Peak position: 3 Weeks on: 6 : From her engagement to actor Liam Hemsworth, to her new edgy haircut and most recently her twerk videos, Miley Cyrus has been the center of attention. Her party anthem “We Can’t Stop,” plays on the singer Lesley Gores “If I Want To.” Cyrus’s video which included her twerking in a bear costume and making out with her alter ego may widen eyes in disbelief, but regardless it’s making it a chart banger.

4) Radioactive – “Imagine Dragons.” Peak Position: 3 Weeks on: 46: Welcome to the new age! Not only is it the top rock hit in July, but Radioactive leads as the years top selling rock digital song. Their hit has gained them platinum attention, and critics are even saying they may be the lifesavers of rock.

5) Macklemore and Ryan Lewis- “Cant Hold Us.” Peak Position: 1 Weeks on Chart: 23 On an independent label (which they own) this duo managed to go triple platinum with “Can’t Hold Us.” The first time nominees lead alongside Justin Timberlake for the most nominations for the 2013 MTV VMA Nominees. The hit is up for best hip hop video best cinematography, best direction and best editing.