Wilson: I Have No Doubt I Will Be a Long-Serving President 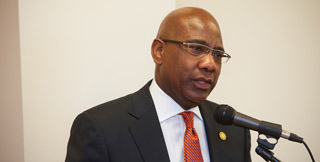 Back in December, it seemed that Dr. David Wilson’s days were numbered as president of Morgan State University. The Board of Regents voted 8 to 7 against renewing his three-year contract when it expires  in June. But after an outcry by students, faculty and alumni, among others,  the board took another vote and decided, 14 to 1, to extend the contract for another year. It also decided,  in a 9-5 vote,  to oust the chairman, Dallas R. Evans, who remains  opposed to Dr. Wilson.

Dr. Wilson, who took office in 2010, has many plans for Morgan, including millions of dollars in building projects now underway and a dramatic improvement in student retention rate by 2021 – eight years from now.

Dr. Wilson was interviewed by Manyi  Abangma, a Spokesman managing editor, and Prof. E. R. Shipp, a Pulitzer Prize winner,  in the studios of WEAA (88.9 FM) on May 13.

Spokesman: Are you going to be here in eight years?

Spokesman: Were you encouraged by last week’s developments?

Wilson:  I feel that we are in a very good place here at Morgan. I was very encouraged by the tone, the support, the forward-thinking outcome of the board meeting. I think the board really grew up after December, and I think the board really didn’t understand [back then] that this really is about Morgan, not about an individual. So, while my “contract” with the board runs through June 30, 2014, I have no doubt at all that I will be a long-term, long-serving president and will be appointed after June 30 in a way that other presidents in the State of Maryland are appointed.

Spokesman: Why was it different in the first place?

Wilson: I actually asked for a contract, coming in. I asked for the contract because I really had not worked at one of our institutions on a full-time basis in a presidency, and so I needed protection, coming from the University of Wisconsin, coming from Auburn.
The vote in December was triggered by a clause in that three-year contract requiring the board to decide, six months before it was set to expire, whether to renew the contract.

Wilson:  Nothing has been presented to me to show that the board was dissatisfied.

Spokesman: Why was the past chairman so upset?