Good album about a m.A.A.d city 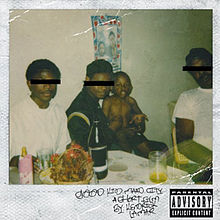 2012’s been a good year for Kendrick Lamar. Still riding off the success of the Top Dawg Entertainment member’s 2012 critically acclaimed project Section 80, fans wanted to know whether Lamar’s talent would smoothly transition into the mainstream after him and his fellow members in Black Hippy signed to Interscope in the spring this year. Recently, Kendrick dropped good kid, m.A.A.d city, his first major label debut album. In an industry that’s been considered “m.A.A.d.”  Is Kendrick Lamar’s major label debut album truly good?

Kendrick Lamar has always been a great lyricist that destroyed instrumentals. The way he takes over beats on featured songs, Lamar catches the attention of listeners and destroys the beats like he was a hired gun. Fortunately, he does the same in good kid, m.A.A.d city (GKMC). Lamar’s flow is quick and consistent while the metaphors, similes and tongue twisting style of storytelling create the detailed picture he wants to paint to listeners. While you have “Backseat Freestyle,” showing the energetic and lyrical talent of Lamar, songs like “Poetic Justice” and “good kid” shows a softer side of Lamar, yet his lyricism is still present and strong throughout the album. An interesting aspect of GKMC is the sophisticated simplicity of some of the lyrics. “Money Trees” and “m.A.A.d city” are prime examples of this because he repeats words like “Ya Bish” and “Yack” to create memorable parts that will attract back simplistic listeners. GKMC is an album where the lyrics are complex and powerful, but not too intellectual to scare away new listeners.

The instrumentals of GKMC were hard to listen to at first; they are nowhere near bad, but a majority of the instrumentals felt a little repetitive. Most of the instrumentals present a powerful bass that pounds your ears along with the lyricism of Kendrick Lamar. Fortunately, this feeling only happened when the album is on random. When GKMC is played all throughout however, it establishes a certain tempo very much needed in order to complete the vision of the album.

GKMC is an album that is hard to create in the current music industry. There are a small number of artists that can tell a story, please a mass audience, and send a message to that audience all at the same time. Kendrick’s story in GKMC paints a picture of the problems in his life, but the story can represent a life in any mad city other than Compton. From the situations of getting set up by an attractive female in “Sherane AKA Master Splinter’s Daughter,” the problems of alcoholism in “Swimming Pools,” and even speaking about committing crimes with friends in “The Art of Peer Pressure,” Kendrick Lamar is providing a story not only about his life, but other people’s lives in areas like Compton. This is what makes GKMC’s content so strong.

Good kid, m.A.A.d city is the gem of our modern society because the album speaks about our modern society. Kendrick tells a powerful story that can be something that listeners can relate to, it is the official album life of a normal person. And though we might not be able to understand or relate to some of the content of his story (because not all of us had marijuana mixed with cocaine like he did in the song “m.A.A.d city”), GKMC speaks about the tribes and tribulations of the normal individual in bad neighborhoods. There will be few artists that will create a gem like this album, and if there are more that do in the future, we need to thank Kendrick for creating a piece that broke the barrier for artists.