Another Expense for Morgan Students 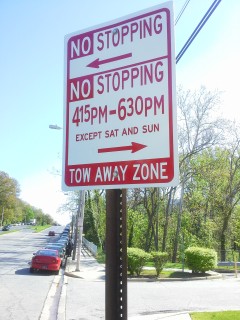 Morgan View officials have begun a series of mass towing in an effort to rid the parking lot of commuters and visitors who have not purchased a parking pass. Now, upon entering any of the apartment complexes, one is greeted by a sign that reads, “Towing Enforcement in Effect.”

The sign, which has been up for more than a week, came days before several tow trucks took the parking lot by storm. “I saw about three tow trucks Saturday night,” said Morgan junior and resident of Morgan View Alicia Agramonte. “One of my friends got their car picked up.”

The scenario is all too familiar for Agramonte, who has never been towed at Morgan View but once had her car removed from a parking spot on Hillen Rd., a location that she explains is notorious for towing.

“I got towed right outside of the Communications building where the sign said, ‘no parking between 4:15 and 6:00.’ [I was towed] at 4:22.” Returning to her car just a few minutes late, Agramonte felt that she was given no sympathy.

“I usually see tow trucks around 3:30 and they all just wait.  The guy who towed my car was out there parked and texting while my car was [being lifted].” She continued, “I begged him, and asked what do I do? He literally rolled up his window and drove off with my hand still on his window.”

Sophomore computer science major Jaimion Lawrence has been towed twice, once in Morgan View and another time on Hillen Rd., right down the street from the Communications building.  In the latter, Lawrence went to move his car at 4:16 p.m. as it was in the process of being hauled away.

“It’s crazy because they’ll tow you in a heartbeat,” said Lawrence angrily. “If I came one minute late, give me some leeway. It ain’t nowhere to park! We’re already paying for tuition and terrible food, you might as well give us free parking.”

During the winter, senior education major Solange Williams was towed outside of Morgan View in the wee hours of the night after crashing at a friend’s apartment. She agrees that booming tuition is the most viable reason students should not have to pay for parking, let alone towing.

“My own mother said she had never heard of towing costing that much money,” said Williams.

On average, anyone towed at Morgan View or near Morgan’s campus pays just under $300 dollars to retrieve their car. Several towing companies remove cars on Morgan’s property, with Pollards Towing Company being responsible for Morgan View.

“Back home it doesn’t even cost that much,” said Lawrence about his hometown of Washington, D.C. “Morgan and the city of Baltimore are overcharging people.”

A Morgan View parking pass costs $125 for one semester and $250 for an entire year. Students who wish to park in an on-campus lot must pay $125.

While students are encouraged to purchase a parking permit, they also have the option of parking in one of two parking garages on campus. One is located next to the Student Center, the other lies adjacent to the Engineering building. Still, many believe that the placements of these garages are unpractical.

“I have to park all the way at the Engineering building or all the way in the Student Center,” said Agramonte, who has most of her classes in the Communications building. “It’s just not convenient.”

Parking at Morgan proves to be an extra expense for students. Whether paying for parking permits or retrieving their cars from impound lots, students with vehicles certainly pay one way or another.

Lawrence was all but pleased as he walked to his parked car on Hilled Rd. at 4:07 p.m. “It’s despicable.”