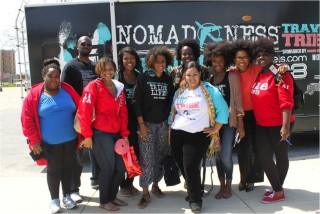 Within a few weeks of graduating with a B.A. in Television and Film from Iona College in 2006, Evita Robinson began traveling and creating her own travel series. However, she still felt that something was missing. Out of that thought, Nomad-ness Travel Tribe was born.

“I felt like honestly, it was my responsibility to bring that opportunity to other college students,” said Robinson. “I didn’t have it but that doesn’t mean that I can’t create it.”

Nomad-ness Travel Tribe is an urban travel, online social community with more than 4,000 members that promotes the passion of traveling. It includes tips to make it affordable. The Tribe is made up of 80 percent women, and 85 percent Black/Latino members, whose goal is to counter the myth that African Americans don’t travel. Robinson, who embarked on this adventure with an online travel series, started the movement because of her passion for traveling and giving back to others.

“When I did the college tour last semester, they had over 100 people come out and that was my first ever presentation,” said Robinson. “The love that I got on Morgan’s [campus] let me know that this was something that needed to be bigger and needed to be here.”

In partnership with Morgan’s Alpha Gamma chapter of Delta Sigma Theta Sorority, Inc., the Nomad-ness Travel Tribe Tour made it’s way to Morgan State University for the second time on April 16 for an all-day event. When Robinson first came to the University last semester, Nomad-ness was just an online travel series. Now, it is in full effect.

Delta Sigma Theta Sorority member Teneshia Smith believes that what Robinson is doing is something that people should look into and involve themselves with. “I think she is phenomenal. To be a young black starting your own business, being an entrepreneur, exposing minorities to traveling and getting out of our comfort zone,” said Smith. “Nomad-ness is something that a lot of people should get involved with cause it’s honestly a great opportunity.”

During the Tribe’s visit to Morgan, Robinson and a few of the Delta’s held raffles where students could win a free trip to a hotel of their choice and a free passport. They also played music and arranged other activities to attract interest.

Nomad-ness will be touring the country and visiting colleges in order to encourage students to explore the world. To get more information about Evita Robinson and her Nomad-ness Travel Tribe visit her website at http://nomadnesstv.com or follow her on twitter @evierobbie.