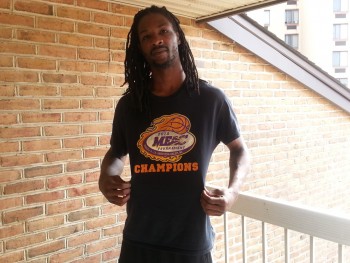 Morgan State senior forward Dewayne Jackson has made a name for himself in the past four years. Jackson is being mentioned with former Morgan players like Reggie Jackson, Kevin Thompson, and may just be the second player from Morgan to play in the NBA (Marvin Webster is the only player from Morgan who played in the NBA as well as the ABA–American Basketball Association).

Jackson says he wasn’t really thinking about going to college after high school. “My AAU coach pushed me into coming to school,” he recalls. Although he had offers from different schools, “Morgan was offering a four-year ride and more.”

From the onset, his choice to attend Morgan seemed like a good one. He won the MEAC Championship, played in an NCAA tournament, and was named MEAC Rookie of the Year. Jackson also led the Bears to the MEAC finals last season, although the team lost in the early rounds of the tournament.

The Bears fell short in the championship game and at the last second, the shot was left to Jackson. He called it a “disappointment” and said that, “I wanted to go out on top, leave like I came in.” Now that the season is over Jackson is “on to bigger and better things” and is “focusing on school and getting grades back up.”

Jackson gives Coach Todd Bozeman praise after a shaky start to last season. “The strategy was left on the board every game: Play Hard, Play Smart, Play Together, Play Defense, and Have Fun.” He finished the season as an Boxtorow All-American team member and also was ranked seventh in MEAC scoring.

Now that his tremendous career at Morgan is over, Jackson leaves the university with big stats: 1596 points, 562 rebounds, 173 steals, and 150 assists.

Former teammates like Kevin Thompson, who now plays professionally overseas, have reached out to Jackson to congratulate him on his accomplishments and to give him some advice. Like most athletes, Jackson has dreams of one day becoming a professional basketball player. If Morgan were to ever retire his jersey number, Jackson says it would be “a major accomplishment.”