B.R.E.A.T.H.E, a police brutality awareness organization, gathered Morgan State students to organize a protest for the recent death of an 18-year-old man who was shot and killed by Baltimore City Police last month. 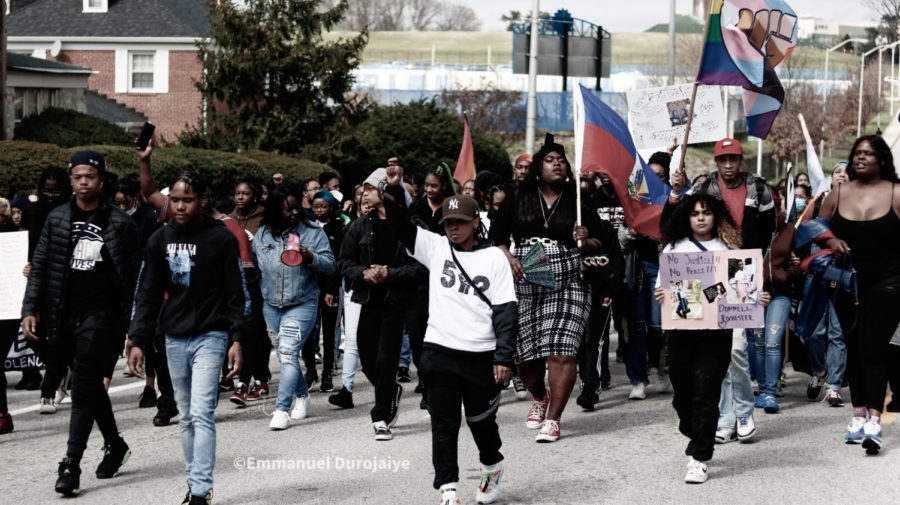 In light of the recent death of Donnell Rochester, who was killed by Baltimore City Police in February, Baltimore citizens gathered on Morgan State University’s campus to protest police killings Friday afternoon.

On Feb. 19, Rochester was shot and killed by the Baltimore City Police Department at just 18 years old.

Police officers, Conner Murray and Robert Morrei, were on patrol when they responded to a vehicle of interest in connection to a robbery on the 3200 block of Hillen Road.

Rochester’s family lawyers said there was a warrant placed for Rochester in the juvenile system for failure to appear in court.

Rochester was shot at approximately 3:13 p.m. The officers called for a medic at 3:14 p.m. At 3:16 p.m. Rochester was heard pleading for help, repeating the statements, “I can’t breathe.”

Rochester’s death sparked a flame across the community with police brutalities and led to a protest starting on Morgan’s campus.

Individuals came together to stand in solidarity with the family of Rochester and demand accountability and action from the police department, Mayor Brandon Scott, and Commissioner Michael S. Harrison.

Co-Founder of the organization B.R.E.A.T.H.E, Joshua Turner spoke numerous times during the protest about the correlation between Rochester and the case of Freddie Gray, which also took place in Baltimore in 2015.

B.R.E.A.T.H.E. was founded in June 2020 by Brandon Dasent and Joshua Turner in response to the wave of protests surrounding the killings of Breonna Taylor, Ahmaud Arbery, and all the other Black lives lost due to police brutality.

Aazon Timmons, a freshman business administration major, was a fundamental piece in getting Morgan State students to come out.

He worked directly with B.R.E.A.T.H.E. to get Morgan students involved with the protest.

Timmons’ involvement in the protest was important to him as he believes Rochester’s identity as a Black queer man hinders the nationwide attention towards his death.

Timmons said, “I feel like homophobia from the Black community is very driven and it’s very much alive. It’s an old habit that needs to be broken.”

Micah Caldwell, a junior multimedia journalism major attended the protest and agreed that it is important for Morgan State University students to show up in fights like these.

Caldwell said, “I think it’s important for Morgan students to show up because we have to realize that once we leave this HBCU bubble, we’re gonna go out in the real world where we’re not the majority. So, we need to practice using our voice here and feeling confident in that so when we get in a room full of white people, we could do the same thing and not think twice about what we said.”

Similarly to Caldwell and Timmons, Christian Ato, a freshman political science major, believes students should be more vocal regarding issues of police brutality in the Baltimore community.

Ato said, “Morgan State was built to help Black people in Maryland…so when you build an initiative like that, you actually have to carry that out so that’s why it’s an honor to have so many students out here today, and we actually should have more.”

Ato believes Morgan students should be pivotal in helping the youth of Baltimore find their voice just as they have been able to.

Timmons said this protest will be the first of a long line of protest to get justice for Donnell Rochester and his family.

“I really want people to be aware of the situation and to be empowered by the movement,” Timmons said.