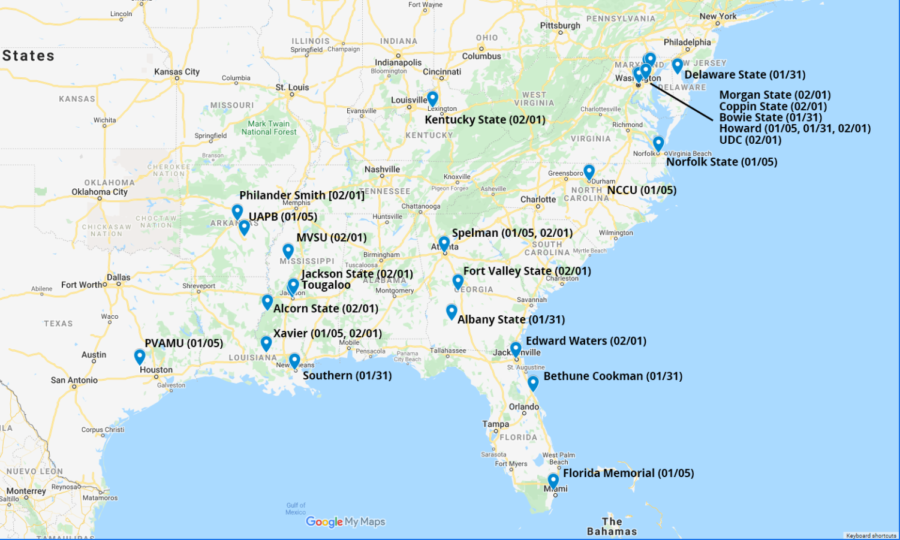 The universities listed in this map have received bomb threats within the past four weeks.

The morning of Feb. 1, Xavier University of Louisiana, a historically black institution located in Louisiana, told its students to shelter in place while officials searched campus for any suspicious packaging or activity.

This was not new to Xavier as they received their second bomb threat in less than a month, that morning.

The Southern Poverty Law Center hosted a roundtable discussion Tuesday for leaders of historically black institutions to discuss the implications of the threats.

The FBI identified six juveniles they suspect were involved in the threats. None have been formally charged, as the investigation is still open.

In Daytona Beach Fl., a suspect claiming to be in a neo-Nazi organization made a threat to Bethune-Cookman University, said Jakari Young, chief of Daytona Beach Police Department.

Felicia Nave, president of Alcorn University, hopes those sending threats will face consequences and be given access to necessary mental health resources.

“These children were the front face [but] there’s a very complex [system] and network that’s behind these individuals,” said Nave.

“Bringing justice, of course [is important], but making sure that we’re also paying attention to the networks that are behind them.”

Walter Kimbrough, president of Dillard University, said that these threats are attempts to disrupt the learning environment of African American students.

“Freedom is sacrifice,” said Kimbrough. “I think we’ve gotten away from some of that.”

“When we understand civil rights, sometimes, part of leaning into who we are is actively leaning into that situation, not showing fear, but confronting it directly,” said Kimbrough.

Many leaders of HBCUs said as they move forward, they hope for more resources and support to fight back and defend themselves and their students.

“I think we’ve got to get a lot smarter,” said Nave. “They change their approach. They’re very strategic and intentional and we need to do the same thing.”

“We need to modernize how we approach it and make sure that we don’t just rely on what we’ve always done.”

Michelle Cooper, deputy assistant secretary for higher education programs said in addition to partnering with Homeland Security and the FBI, the Department of Education will continue to give resources to HBCUs and minority-serving institutions.