After a two-month delay, Chick-fil-A’s grand opening ceremony took place this past Friday. 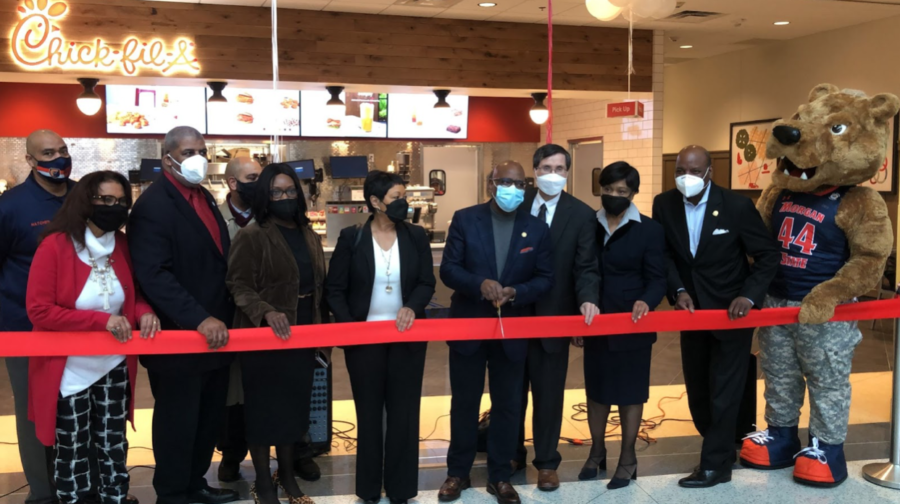 President David Wilson cut the ribbon to the newly opened Chick-fil-A on Feb. 4.

Morgan State University officially welcomed franchise restaurant Chick-fil-A in the Student Center with a ribbon-cutting this past Friday.

President David Wilson was joined by faculty, staff and students to cut the red ribbon placed in front of the newest addition to campus. The fast-food restaurant held a soft-opening a few weeks prior on Jan. 12.

Mitchell Oliver, general manager for Sodexo Magic, used the soft opening as an opportunity to fully train employees before a full opening.

“We had the soft-opening the first week. And the second week was an opportunity for them to actually train on the students, faculty and staff, and the community. And then we wanted to do the grand opening. We needed to align with the Morgan State University community as well,” said Oliver.

Ron Stevenson, director of business and auxiliary services, added “We wanted to make sure everyone could be in attendance for the grand opening.”

During the soft-opening, two Chick-fil-A trainers came for one week to train the newly hired staff.

Chick-fil-A was set to open last semester, on Nov. 15. However, there were unforeseen circumstances that delayed the opening until January.

Oliver stated that there were problems with build-out, contractors, supply and demand with regards to equipment because of the pandemic.

“That was some of the biggest challenges,” he said.

Stevenson added, “ It’s hard to get equipment in when you’re getting stuff from overseas and just being shipped around so it just delayed everything.”

With the Chick-fil-A newly open, there are some kinks that still need to be worked out.

Rianna Roasrio, freshman business administration major, spoke highly of the restaurant and complimented the staff on their great customer service and cooking. However, she believes that the service could be a little faster.

Stevenson and Oliver noted the reason for the slow service is the restaurant providing fresh food to their guests.

Stevenson explained, “Of course, nobody wants to wait 5-10 minutes to get their food but it’s always fresh. I think that’s the key of Chick-fil-A. We throw away a lot of products if we don’t keep the product fresh. Because Chick-fil-A has rules in place.”

“There’s a timer. When we make the food, there’s literally a timer there. So if that food doesn’t move within 3 minutes, it goes right in the trash. We can’t keep it. We can’t put it in the back and reuse it,” Oliver added.

The new Chick-fil-A offers full operation from 11 a.m. to 9 p.m. on Monday to Friday and 11 a.m. to 8 p.m. on Saturday. Students can use their university dining dollars for payment at the restaurant.