Several factors played a role in President David Wilson’s decision to reopen the university on time for the spring semester. 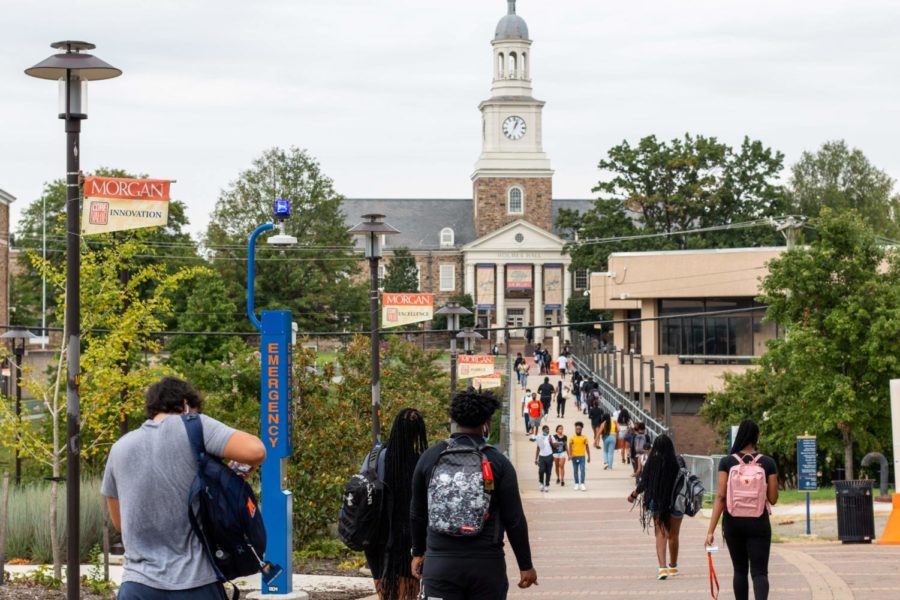 Morgan campus receives a bomb threat, similar to those received at other HBCUs

Amid a nationwide COVID-19 surge with the omicron variant, Morgan State University will conduct in-person instruction to begin the spring semester on Jan. 24.

According to President David Wilson, the university’s decision to reopen at full capacity in-person was unanimous among the president’s team.

The university announced its spring semester reopening plans on Jan. 6 along with restrictions set in place.

Like last semester, all students and faculty are required to receive two doses of the COVID-19 vaccination or submit an approved exemption.

However, the university decided against requiring individuals to get a third “booster” vaccination.

Morgan is following guidance from the Centers for Disease Control and Prevention (CDC) in recommending the third dosage.

Wilson said, “The CDC is not requiring that individuals receive the booster, and we follow the CDC advice in strongly recommending it and then showing the benefits of individuals who had received a booster. We hope that students and faculty and staff will heed that advice.”

Wilson also explained decisions like this could be reconsidered in the future.

“​​One thing that I have learned leading through the pandemic is that decisions made this week can certainly be revisited at any point,” Wilson added.

Along with the vaccine requirement, Morgan’s indoor mask mandate continues for the spring semester.

The mask mandate was not extended to outdoors, but Wilson encourages individuals to wear them while near others.

According to Wilson, the university is in the process of acquiring KN95 masks to distribute on campus.

“We are in the process of acquiring several thousands of KN95 masks or masks that have been scientifically approved and they will be available in various locations around campus,” Wilson said.

With the recent surge in positive cases, scheduling a COVID-19 test or finding an at-home test has been a challenge.

In an interview with the Spokesman on Jan. 7, Wilson stated the university is accepting all forms of COVID-19 tests; polymerase chain reaction (PCR) test, rapid antigen test and at-home test kits.

Wilson said the decision to accept all forms of COVID tests could ease any difficulty finding tests.

Regarding what tests could be submitted, Wilson said, “We are leaving that up to the population, the student population and our faculty staff population. If we get too specific on this, we don’t know what the availability of those tests will be.”

However, the office of public relations and communications has since said at-home test kits will not be accepted.

Larry Jones, assistant vice president of public relations and communications, wrote, “Please note that at-home test kits will not be accepted. Not only is there no way to submit the results of these tests via an online portal but there is also no way to confirm who took the test and/or the accuracy of the test.”

Individuals can get tested off-campus or at Morgan’s on-campus testing site in the Montebello complex. The testing center has expanded its operation to four days a week. For the next two weeks, the testing center is currently open every day from 9 a.m. to 3:10 p.m. in Montebello B-200.

During the semester, testing is only required for those with vaccine exemptions. There will be mandated testing throughout the semester with groups of the student population and available testing for anyone who would like to get tested.

According to Ruth Agwuna, director of the university health center, the testing site provides both PCR and rapid antigen COVID tests.

Agwuna said, “At Morgan, we use mainly for screening purposes, the rapid antigen tests because of the quick results we can get from them.”

“We also at the University Health Center use the PCR test when needed on students who show symptoms or have been exposed,” Agwuna added. “This test is then sent to the labs that we are contracted with and the results can take 24 to 96 hours to be reported out based on what is going on with the pandemic at the time of the test.”

Wilson is already expecting a number of positive cases when individuals return to campus due to the lack of available COVID tests across the country.

“You’re going to have now all of those individuals who normally would have tested someplace else testing on the campus,” Wilson said. “It just stands to reason that you are going to see more positives that show up on the Morgan chart.”

Wilson did not specify how many positives he is expecting, but he plans to follow the advice of health officials if cases rise exponentially.

However, Wilson was unsure if Morgan will continue the same standard this semester as only a portion of the student body is tested at a time.

“We’re only testing those individuals who have received the exemptions and—some surveillance testing which means by a sample of the larger population,” Wilson said. “If a larger population here is roughly 10,000 people, a 5 percent of that would be 500. However, we have to get advice from our public health officials here as to whether we only would limit the percent to the number of individuals who actually tested.”

Wilson said COVID testing is not required for the entire Morgan community.

He said, “That would just simply be impossible to manage. No university in the country is doing that.”

However, some universities like Ohio University are requiring on-campus students to participate in COVID testing.

“We have not been presented with any data from our public health experts that is showing anyone that if you’re fully vaccinated, that you need to be tested two times a week. If you are symptomatic, yes, but no not asymptomatic individuals who’ve been vaccinated,” Wilson added.

COVID-19 testing for unvaccinated students will be monitored through student affairs and the health center. The Human Resources department will monitor testing for employees.

Correction: This article has been updated to accurately reflect what forms of COVID-19 will be accepted prior to returning to campus. President David Wilson previously stated the university would accept all forms of COVID-19 tests; polymerase chain reaction (PCR) test, rapid antigen test and at-home test kits. However, at-home test kits will not be accepted, according to Larry Jones, assistant vice president of public relations and communications.