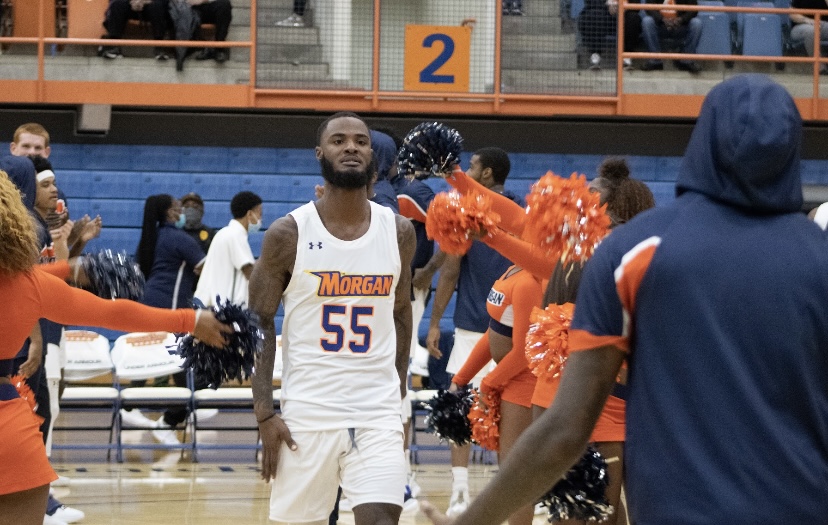 The Bears struggled to find their rhythm at the start of the game and found themselves down 26-18 with 10:43 left in the first half.

“We played down to the level of competition,” said head coach Kevin Broadus. “Guys looked at them coming in as a Division 2 team.”

“I feel like we came out in the first half a little lapsed,” Miller said. “As the game started going, we picked it up more and more.”

In the first 9:17 of action, Morgan allowed Millersville to make five of seven shots from behind the arc.

After the second media timeout, the Bears went on a 9-0 run to lead the Marauders 27-26.

In the first half, the Marauders were led in scoring by graduate guard James Sullivan who scored 10 points and made two of three shots from behind the arc.

Marauders’ junior Mekhi Hendricks also made two of three shots from behind the arc in the first half and finished the half with eight points.

As a team, Millersville shot 50 percent from the three-point line on 12 attempts in the first half.

Three-point defense remained an issue for Morgan the entire game.

The Marauders finished the game shooting 48.1 percent from behind the arc on 27 attempts.

Sullivan, Hendricks, and junior forward Ryan Davis combined to shoot 10-for-17 from three-point distance in the game.

“We’ve just got to close out harder, force the mid-range pull-ups, or force another kick out,” Miller said.

Morgan graduate guard Seventh Woods led his team in scoring in the first half with seven points on 3-for-5 shooting in 10 minutes.

Miller scored six points on 3-for-5 shooting and secured six rebounds in 13 minutes of action in the first half.

19 seconds into the second half, Morgan senior guard Trevor Moore substituted into the game for Horner.

Moore scored four points in seven minutes of action in the first half.

In the second half, he scored 14 points on 4-for-6 shooting and shot 66.7 percent from behind the arc on three attempts in 17 minutes.

He also made all four of his free throw attempts in the second half.

“It felt good,” Moore said in regards to making shots. “Being a shooter… I got a short memory on missed shots.”

“It was a long time coming,” Broadus said. “He made shots. He’s got to build on this game. His performance was very good and he played defense.”

With 16:25 remaining in the half, Marauders’ senior guard Khari Williams converted a four-point play after being fouled by Miller to give his team a 46-45 lead.

With 13:05 left in the game, Sullivan also converted a four-point play after he was fouled by Horner, improving his team’s lead to 56-52.

During the run, the Marauders turned the ball over five times.

They finished the game with 24 turnovers and Morgan scored 30 points from their turnovers.

Millersville’s most costly turnover came with 31 seconds left in the game.

Down 72-71, Hendricks attempted to pass the ball to graduate forward Caden Najdawi but it was intercepted by Moore who was then fouled.

“I was in the right spot at the right time,” Moore said.

Since Morgan was in the double bonus, Moore shot two free throws and made both, giving his team a 74-71 lead.

With 11 seconds remaining in the game, Sullivan shot a three-pointer from the right wing to try to tie the game but missed it short.

Woods secured the rebound and was then fouled.

He made one of two free throw attempts to give Morgan a 75-71 lead.

The Marauders then called a timeout to draw up a play.

After the timeout, senior forward Justin Nwosu committed a backcourt violation as he tried to pass the ball to Sullivan

Sullivan was forced to intentionally foul Morgan senior guard Isaiah Burke on the next play to try to extend the game but fouled out in the process.

Burke made both of his free throws and the Bears ultimately won the game 77-71.

Sullivan finished the game with 20 points while shooting 50 percent from the field on 14 shots.

Moore finished with a team-high 18 points and four steals.

Miller led the Bears in rebounds with seven and also scored 10 points on 3-for-6 shooting in 20 minutes.

Morgan finished the game shooting 44.6 percent from the field on 56 attempts.

Millersville shot 49.1 percent from the field on 55 attempts.

However, Millersville only attempted six free throws and made four while Morgan shot 80.8 percent from the foul line on 26 attempts.

The Bears will try to extend their win streak to three games when they face the Longwood Lancers (5-4) in Farmville, Va. on Saturday.