The Bears ended their season on a positive note Saturday after defeating the Hoyas and improving their record to 2-9. 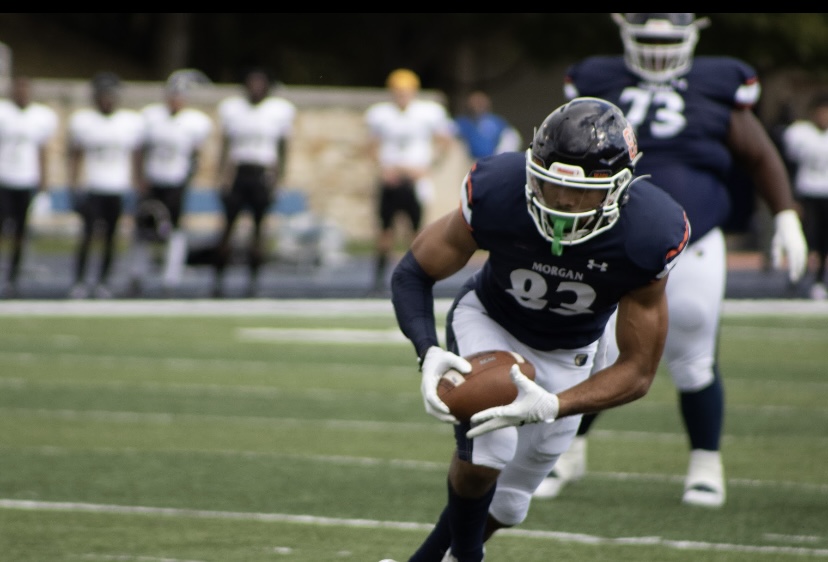 Wins were hard to come by for Morgan’s football team throughout the 2021-22 season.

Coming into Saturday’s game against the Georgetown Hoyas, the Bears won only one out of 10 games and were tied with Howard University for the worst record in the Mid-Eastern Athletic Conference (MEAC) at 1-4.

Despite their difficult season and being riddled with injuries on Saturday afternoon, Morgan earned a 28-21 comeback victory over Georgetown in Hughes Stadium.

Key contributors for the Bears like junior linebacker Lawrence Richardson and junior wide receiver Thomas Marcus did not suit up.

The Hoyas scored touchdowns on two of their first three possessions.

After Das’ touchdown, the Hoyas converted a two-point conversion improving their lead to 8-0.

On their next drive with 13:41 left in the second quarter, backup quarterback Tyler Knoop faked a handoff and then ran up the middle of the field for a 55-yard touchdown.

After being down by 14 points, the Bears scored 28 unanswered points.

With 12:48 in the second quarter, junior running back Alfonzo Graham scored a 40-yard touchdown run.

With 1:54 left in the quarter, junior running back Romello Kimbrough scored a one-yard touchdown run, but kicker Kluivert Akubuo missed the extra point.

With 11:43 remaining in the fourth quarter, Graham scored an 86-yard touchdown run which was the longest touchdown run of the season for the Bears.

Graduate quarterback Neil Boudreau, who played the last game of his collegiate career, completed a pass to Kimbrough to successfully complete a two-point conversion.

With 1:58 remaining in the game, junior running back Jabriel Johnson scored a four-yard touchdown run.

The Hoyas were able to score a touchdown in 40 seconds on their next drive.

Brunell’s 14-yard touchdown pass to senior wide receiver Cameron Cryaton capped off the four play, 71-yard drive but it wasn’t enough as the Bears ultimately earned their second win of the season in front of their home crowd.

Here are the top five takeaways from the Bears’ final game.
Running back Alfonzo Graham caps off his stellar junior campaign with a special performance
One bright spot for the Bears throughout their season was the performance of Graham.

His explosive speed enabled him to score long touchdown runs throughout the season.

Coming into Saturday, he had scored three touchdown runs averaging 48 yards on each one.

He covered Crayton for most of the game.

Prior to Crayton’s touchdown reception in the final moments of the game, Morton limited the receiver to four catches for 48 yards.

Stukes, a freshman, also had multiple pass deflections and an interception in the game and was a major reason the Hoyas struggled to score after their hot start.
The Bears continued to struggle on third down
Third-down conversions were an issue for the Bears the entire season and Saturday was no different.

Each of the Bears top three running backs scored a touchdown.

Freshman Krysten Riley-Richardson also had a key 48-yard run in the fourth quarter that helped set up Johnson’s touchdown.
Head coach Tyrone Wheatley earns his fifth win at Morgan
Wheatley, who has been at Morgan for three years and coached two seasons, is now 5-18 all-time.

Although he has witnessed many losses during his time at Morgan, the potential of his young team showed on Saturday.

The talent of young players like Riley-Richardson and Stukes was illustrated against Georgetown and perhaps previewed what the team could look like in the coming years.