Rashida Jones, president of MSNBC, visits Morgan for an open discussion with students

In January, Morgan State's School of Global Journalism and Communications received a $500,000 grant and partnership from NBCUniversal. This year, Rashida Jones visited the university to discuss diversity, leadership, and the future of broadcast journalism. 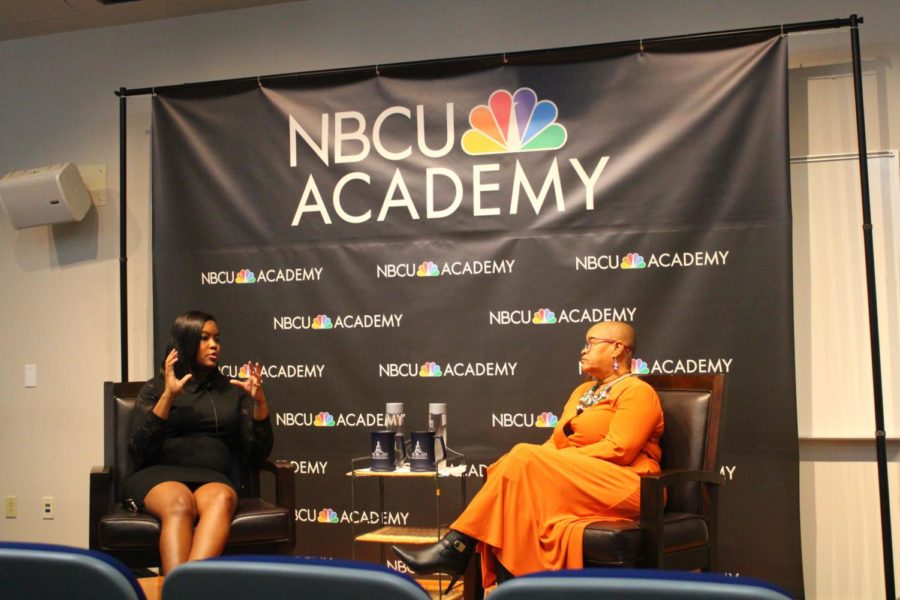 "My takeaway is, who am I inspiring? Who out there now sees somebody who looks like them and wants to pursue a job like this," said Rashida Jones.

Jones discussed the perception graduates of historically black universities must overcome in media careers and the importance of diversity in media leadership.

When she began her career in media, Jones said that she rarely saw people who looked like her in high-level media positions. At her internships, she often had to deal with others’ views of her and her demographic.

“I think for me, there were three factors that always kind of, I will remember as things I had to kinda overcome or get over,” she said. “So there was one being a woman in the newsroom, being African American, but also being one of the younger journalists.”

“I still remember the story to this day [of an anchor] telling me you are one of the best writers in the newsroom. You have such solid news judgment. You’re just so talented. The only issue is you’re just young.”
When she was a student at Hampton University and HBCU in Hampton, Va., Jones applied for an internship with the National Basketball Association.

She recalled that when she got her acceptance letter in the mail, she was in disbelief. She also noted that she battled with feelings of self-doubt.

“I didn’t even believe that I deserve something like that.”

“I think there’s a perception that ‘oh if you come from an HBCU,’ A, you have a different kind of social experience and cultural experience than other students,” she said. “And that doesn’t relate to walking into newsrooms where it is going to be of mixed races, which is, as you guys all know, very incorrect.”

Now, as the president of MSNBC, Jones hopes that her representation in the media shows people from similar backgrounds as her that they can also reach high levels of achievement.

“My takeaway is, who am I inspiring,” said Jones, “Who out there now sees somebody who looks like them and wants to pursue a job like this.”

Jones said that she hopes to encourage rising journalists of various backgrounds to take on roles in the media. Her work with NBCU Academy is a reflection of that.

“What I love about NBCU Academy is that they focus a curriculum on what are things- what are skill sets that you need [inaudible],” she said.

“And so and specifically focusing on universities, whether you’re HBCUs or schools that have predominantly Hispanic or API’s, how do we strengthen the pool of candidates for journalists of color is really the goal.”

Julius Johnson, a junior multimedia journalism major, asked Jones about how she handles public relations in her role as president.

“I read that you [Jones] don’t don’t per se lead like the last president, but everyone really likes that you connect with people through your conciseness and basically like charm essentially,” he said.

“I tried to be very deliberate as being the same person all around because I think it’s important for people to just see the authentic nature of who I am,” said Jones.

She also mentioned that she makes it a point not to assimilate to the culture of her industry, a culture dominated by white men, but instead views her experience as a black woman as strength.

According to Jacqueline Jones, dean of SGJC, after NBCU Academy visited the university, future activities with the academy are on the horizon.

The dean’s office will allocate the $500,000 grant to students with a vested interest in broadcast journalism at the start of the Spring 2022 semester.

Jacqueline Jones also stated that scholarships from the $500,000 grant- awarded to the university by the academy- will cover some scholarships throughout 2021 and 2022.

The university and academy will reconvene in mid-2022 to determine if the grant will be renewed.