Timeline: How homecoming escalated from celebrations to a shooting

Morgan university students recount the tension, disorganization, and lack of security in the week leading up to the event. 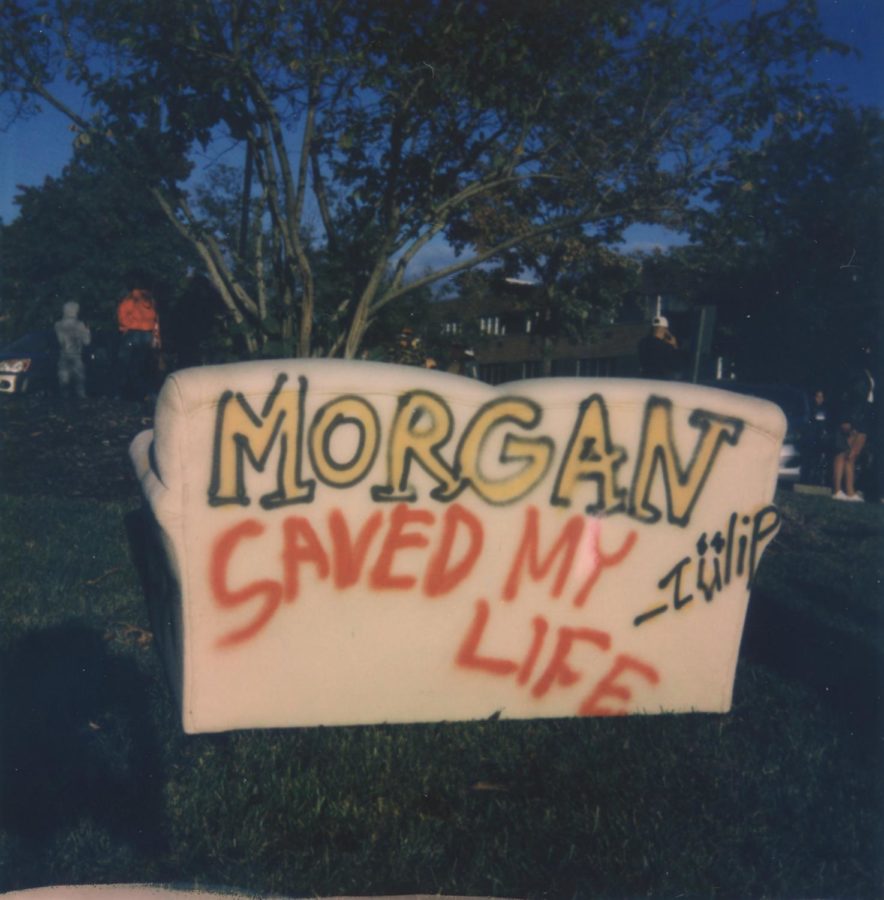 The couch above circulated throughout campus homecoming night for students to sign and photograph.

After months of uncertainty, Morgan finally reunited at this year’s homecoming celebration.

However, the week, meant to celebrate community and family, was soon plagued by tension.

The escalating frustration between students, visitors, alumni, and security came to a head when on Oct. 23, an individual was shot on Morgan’s campus.

Weeks after the event, Baltimore police have not made an arrest.

Morgan continues to reflect on the days which led up to the shooting.

4 p.m.: Guests started lining up on both sides of Hill Field House over four hours before the concert began. Temperatures were as low as 64 degrees.

5 p.m.: The crow grew antsy as people cut in line to get further ahead. People started to wonder if they would get a refund for their tickets if they could not get into the building.

6 p.m.: After two hours of waiting, the Hill Field House doors opened for entry. The line was moving slowly. Guests gathered around the doors, muddling lines into a crowd.

To get into the concert, guests had to walk through metal detectors and get their bags searched.

Brianna Stephenson, a student from Towson University, said that security present did not direct guests.

“I asked one of them a question, I asked if there were separate lines for the two different types of tickets, and the security told me yes, that we had to be in specific lines depending on the types of tickets we had,’ she said.

“This was not true, we could stand in any line, so they weren’t very helpful.”

7 p.m.: When guests flooded the open floor in front of the stage as they entered the gym. Many took their seats in the bleachers. However, the line was still very long outside of the Field House.

10 p.m.: 42 Dugg came out to perform. The remaining guests outside the gym were allowed entrance.

11 p.m.: Lil Durk came out to perform. The crowd became more compact as the DJ urged guests to come to the front. The crowd packed together tightly.

Unlike Wednesday’s concert, the sneaker ball, where sneakerheads showed off their shoes while wearing formal attire, was for students only.

Carter Dunn, senior multimedia journalism major, said this was his third homecoming week. He had planned on attending three of the homecoming events.

“I’ve never been to a concert here, and the lines weren’t long, but the concert yesterday was out of control,” he said. “There were like four fights, and it seemed security was only letting two people in at a time.”

6:45 p.m.: A line formed in front of the University Student Center.

Dunn said, opposed to Wednesday’s concert, admission into the ball was much more organized.

“Security definitely had a different system going into the concert, but that could also be because there were less people there,” said Dunn.

Natasha Lewis-Williams, interim associate vice president for student affairs, said that about 4,000 patrons, including performers, were at the Friday night event.

University administration allowed an extra 500 people in addition to the 3,500 people who paid for pep rally tickets. Students who did not purchase a ticket could use their Bear Card to get into the Pep Rally.

Lewis-Williams explained that the university wanted to give students fair access to the event.

“We understood that some were not able to obtain tickets in advance and did not want to ruin their Homecoming experience,” said Lewis-Williams.

1 p.m.: The football game kicked off with the North Carolina Central Eagles. Many were still tailgating throughout the game. The crowd was excited by the possibility that our Morgan bears would finally win a game.

The Morgan Bears lost to the NCCU Eagles 28-17.

3 p.m.: An outpour of rain took over the day, leading to gatherings in the University Student Center and the concession booths.

Tensions increased as overcrowding made it difficult to get across campus. As time went on, more people filled the area behind the Montebello complex.

6:30 p.m.: A shooting occurred at the Montebello complex.

People scattered around the fields of Montebello and Murphy Fine Arts Center. DJ Lor Z had told everyone to leave the area as a helicopter circled the premises.

After the shooting, roads became congested as many tried to leave.

9:00 p.m.: Alumni and students relocated to the parking lot near the Earl G. Graves School of Business and Management. They continued their homecoming festivities.

Adrianna Proctor, senior psychology major, said, “I left right after the shooting, around nine. My friend called me and said she was still partying.”

10:00 p.m.: Baltimore City police made their way through campus with their sirens to try to get people off the school grounds.