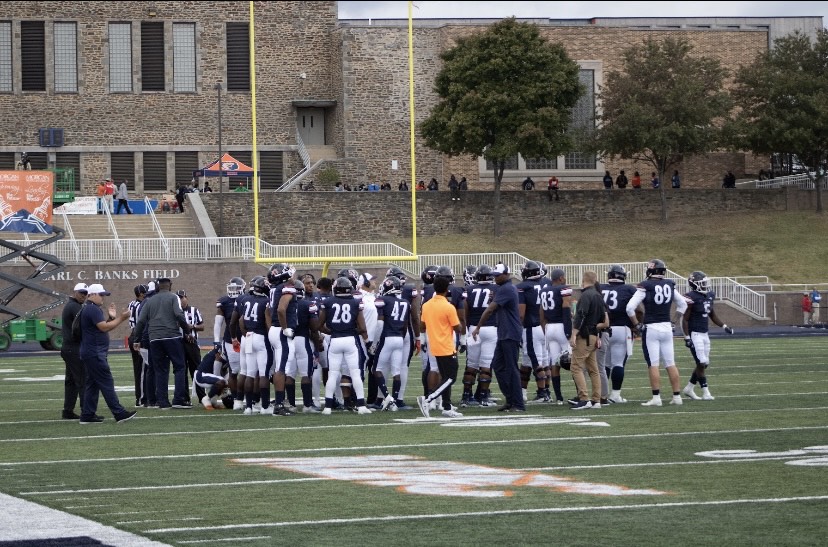 Morgan State’s football team arguably put out their best performance of the season on Saturday in Hughes Stadium, but it wasn’t enough to earn them a win as they lost to the North Carolina Central University Eagles (3-4) and fell to 0-7 on the season.

There were some bright spots for the Bears such as having their first lead in the second half of the game this season and losing by the fewest points of the season.

One thorn in the side of the Bears was the performance of NCCU quarterback Davius Richard.

The six-foot-three sophomore quarterback completed 16 of 20 passes for 242 yards with four touchdowns and one interception.

Morgan will try to earn their first win of the season next Saturday, Oct. 30, when they face the Norfolk State Spartans in Price Stadium in Norfolk, Va.

With 4:41 remaining in the third quarter, Kimbrough scored a 55-yard touchdown run which gave Morgan a 17-14 lead.
Two weeks of interceptions for Kaleb Coleman
Morgan freshman safety Kaleb Coleman had an interception for the second week in a row against NCCU.

With 7:50 remaining in the second quarter, Coleman picked off Richard and returned the ball for 26 yards to NCCU’s 30-yard line.

His interception helped set up a 25-yard field goal by Kluivert Akubuo which gave Morgan a 10-7 lead.

Akubuo’s successful field goal was his first of the season.
Morgan’s defense gave up too many big plays
Of the four touchdown passes thrown by Richard, two of them were for at least 30 yards.

With 6:45 remaining in the third quarter, Richard threw a 31-yard touchdown pass to Isiah Macklin which gave NCCU a 14-10 lead.

Richard completed a 53-yard touchdown pass to Andrew Smith giving NCCU a 21-17 lead with 1:35 remaining in the third quarter.
Morgan struggled to convert on fourth down
Morgan was just 1-for-4 on fourth down conversions against NCCU.

Instead of kicking a field goal, Morgan elected to convert the first down but they were unsuccessful as Morgan quarterback Neil Boudreau completed an 8-yard pass to Graham, two yards short of the first down marker.
Tyrone Wheatley is off to worst start in his Morgan career
During Morgan’s 2019-20 season, it took Wheatley six games to earn his first win of the season.

Morgan’s first win of that season came on Oct. 12 when they defeated Delaware State 34-3.

Seven games into the season, Morgan is still searching for their first win and things won’t get any easier for them as they face the 5-2 Norfolk State Spartans and then the 3-4 Delaware State Hornets the following week.