The university hosted a ribbon cutting ceremony on Friday to celebrate the opening of Calvin and Tina Tyler Hall. 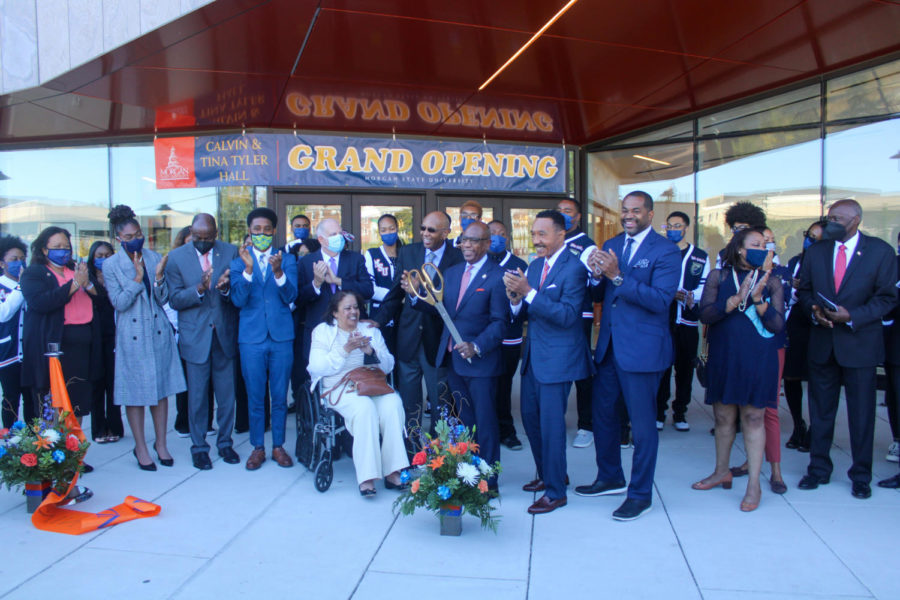 Until this past year, the Montebello Complex across campus held the office of financial aid, bursar, and student services.

The old complex was far from centrally located from many on-campus student housing and was as much as a 30-minute walk from some on-campus dorms.

As Morgan’s campus began to expand, David Wilson, president of the university, realized that a new facility the university needed to handle its growth.

When Wilson first arrived on Morgan State University’s campus as the new president, he was shocked to see that incoming and current students were directed to Montebello for student service.

“When I arrived, I couldn’t believe that we were bringing those 1000s of students from around the country to a dilapidated facility that should have been raised 30 years ago,” Wilson said during the ceremony.

After receiving an $88 million commitment from Maryland five years ago, Wilson decided to begin the process of building a new student service building for the university.

“We wanted it [the student service building] to be the university’s front door because, trust me, Montebello was absolutely ridiculous.”

On Oct. 22, the university held a ribbon-cutting ceremony to celebrate the finalized construction and opening of Tyler Hall.

The 141,000 square foot building includes Undergraduate Admission and Recruitment, the Center for Academic Success and Achievement (CASA), the Office of Financial Aid, Bursar and other resources.

“We wanted to introduce them to a new way to avail this institution to them to our surrounding community, a new way of serving our students, we wanted to provide our students with a top-line student experience,” said Wilson. “And that was the vision that has given rise to the Calvin and Tina Tyler Hall that you see today.”

When Wilson first began developing his vision for the new facility, he was unsure who the university would name the building after.

However, after the plans for the new facility began to solidify, he felt that the building should be named after the Tylers because of their shared interest in student service and financial well-being.

“I made a decision about five years ago that this particular building would carry the name of Calvin and Tina Tyler Hall and brought that recommendation to the board, and it was unanimously approved,” he said.

Calvin Tyler attended Morgan State University from 1960 to 1963 but dropped out due to financial restrictions before his graduation.

He later began working at UPS and climbed ranks from truck driver to senior vice president.

After his retirement, Tyler and his wife, Tina, pursued philanthropic endeavors.

Then, in 2021, the Tylers broke records again by donating $20 million to the university.

“The $20 million gift that Calvin and Tina have made to Morgan is the largest individual gift ever given to an HBCU by an alum who attended that institution by a longshot,” said Wilson.

During his remarks at the ceremony, Tyler remarked that, though he is honored, he feels that he and his wife, Tina, were doing what was right.

“Tina and I really appreciate all of the remarks, all the comments, all of the recognition, but in some ways, we feel a little bit uncomfortable being recognized for doing what’s right,” said Tyler.

“When you’re blessed- and we’ve been blessed-  you should try to find a way to give back and help others, said Tyler.”

In attendance at the ribbon-cutting ceremony, Mayor Brandon Scott said that the finished construction and opening of the Tina and Tyler Hall has added value to Morgan State University and Baltimore City.

“For those who don’t know, I have declared Morgan State Baltimore’s University. It’s not just Morgan State University,” said Scott. “We know how much this institution means to our city.”

“We know that we have many universities in Baltimore, but none speaks to the spirit, the culture, the history of Baltimore like Morgan,” he said. “Morgan bears come here. They never leave. And that’s what makes Morgan Baltimore’s University.”