5 Things to Know About Tyler Hall 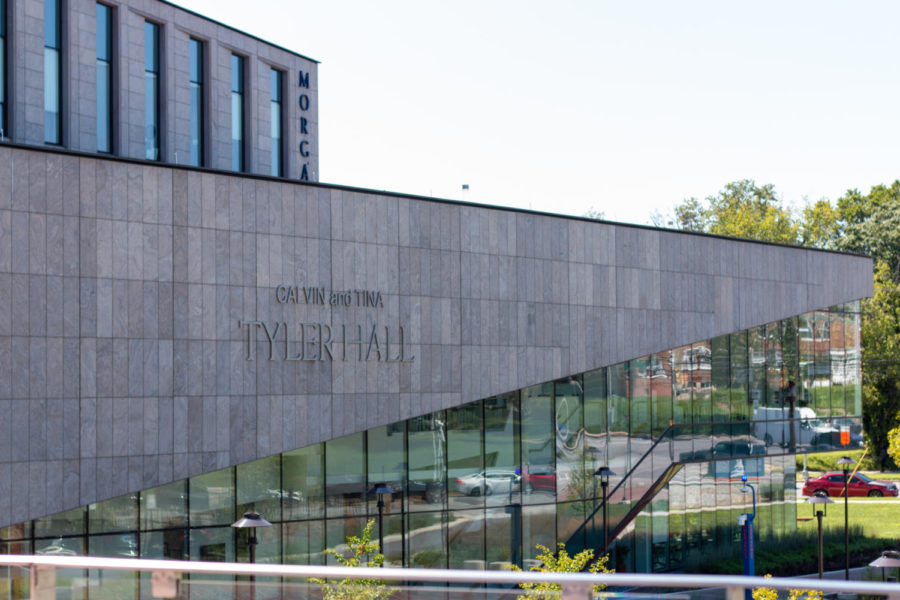 Over a year after its construction, Tyler Hall, the new student services building, will have its grand opening ceremony on Friday, October 22, 2021. There will be an official ribbon-cutting in front of the building at 10 a.m., which the public is welcome to attend

While it has been open for some time, many people do not know the significance of the building. Here are five things you should know about Tyler Hall.
1. Who are Calvin and Tina Tyler?
Tyler Hall is named after philanthropists, Calvin and Tina Tyler. Calvin Tyler attended Morgan State University for two years before he was forced to drop out due to financial reasons. He went on to be a United Parcel Service truck driver (UPS) and eventually became the Senior Vice President of Operations. However, he never forgot his roots even after he retired.

Calvin felt that there were other students very much like himself who struggled with their finances. He wanted to assist them so that students wouldn’t have to withdraw from school and instead, finish their education and receive a degree. As a result, the couple created the Calvin and Tina Tyler Endowed Scholarship Fund scholarship, which is given to selected students who need financial assistance.

The Tyler’s have given over $20 million to Morgan. Since 2002, they have been assisting students and giving back to the university. Their most recent monetary donation is the largest that a Morgan Alumnus has given and the biggest any historically Black college or university has received from alumni. For their generosity and contributions, Morgan decided it was best to name the Tyler Hall building after the couple.
2. The history and location of Tyler Hall
Tyler Hall replaced the original Soper Library building that was positioned on the corner of Cold Spring and Hillen. The formal groundbreaking took place back in September 2017. The new Tyler Hall building was completed in the summer of 2020. However, because of the COVID-19 pandemic, there was not an official grand opening ceremony until now.

Dell Jackson, director of public relations and strategic communications, describes this location as “hollow ground.” This building is located in the heart of Morgan Commons. “Morgan Commons is the lifeline if you will. It is the center of activity,” Jackson said
3. What is inside Tyler Hall?
The student services found in Tyler Hall were once in the Montebello building. With five stories, the building is over 141,000 square feet, with various offices and multipurpose.

On the first floor, you can find the Office of Undergraduate Admission and Recruitment, the Center for Academic Success and Achievement (CASA), Student Success and Retention, and the Veterans Engagement Services Unit.

On the second floor, there are Bear Essentials (Morgan’s one-stop for student services). These essentials include the Office of Financial Aid, Bursar, and Registrar. There is also a Police Substation and a small dining kiosk. Multiple seating areas are strategically located around the open space so students can wait, do homework, or converse with friends.

The fourth floor houses the division of Information Technology (IT) and Comptroller. Lastly, on the fifth floor, you have Human Resources, Payroll, and Office of Diversity & Equal Employment Opportunity.

According to Jackson, “these essential units are places and various offices that students touch with great frequency, as well as our staff and faculty. And so when we are able to house all of those areas in one centralized location, under one roof, then we are able to really meet the demands of the entire morgan campus community in a manner that gives great flexibility and ease of access.”

Tyler Hall also has a general lobby space that is modular and can be reconfigured for seminars. Its multipurpose training rooms can hold up to 50 people for any program needed. Students can access the green roof’s seating areas to relax and enjoy the outside environment.
4. Tyler Hall received awards for its design and construction.
Although the building has not been around for long, it has already won numerous awards. Tyler Hall was named American Institute of Architects (AIA) Maryland Public Building of the Year. It has received an Excellence in Design Honor Award and the 2021 SCUP Excellence in Architecture Award. In total, Tyler Hall has received more than seven architectural design awards and two construction awards.

“We believed our campus is truly like no other,” Jackson said.

He continues, “When you look at the Diversity of landscape that we have here at the university from our historic buildings that are on the quad to some of the most modern state-of-the-art facilities and design that we see here. ”
5. The Morgan Community was involved in its construction.
Morgan students were involved in the design and development of the building, including the fixtures and furniture. The school wanted to understand the students’ concerns. Jackson explained how faculty members heard loud and clear about what great strides students took to get to Montebello.

“We listened to students in terms of putting these very valued and critical services in this building.”

There were also 51 local people hired for the construction team, 16 for the project management staff, and 35 for the field crew. Morgan worked with the Barton Malow Construction Company, located about 4.5 miles away from campus.

Jackson commented how the university wanted to have a certain percentage of people from the community that worked on the project and live inside of the morgan community mile. They were able to employ 19 people, exceeding this goal. This was a way to uplift the community that surrounds the campus, reinforcing what the Tylers represent.

“We want our students, when they go through both doors at Tyler Hall, to see the name on the building, Calvin and Tina Tyler, and know it’s historic. And know that this philanthropist, this fine alumnus of MSU gave back to this university. And created a scholarship so that folks would be able to graduate and matriculate to receive  their degree despite financial hardship.”