After battling injuries throughout her collegiate career, Lady Bears volleyball player makes the most of her senior season

Lady Bears senior middle blocker Jasmin Perry is having the best season of her collegiate career despite her team’s record. 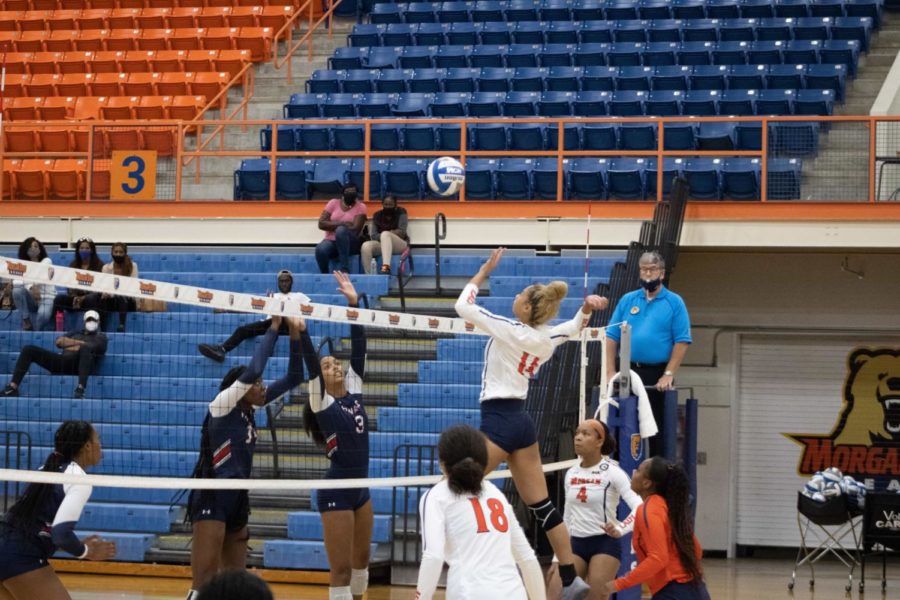 Morgan State senior middle blocker Jasmin Perry is making the most out of her senior season.

Lady Bears senior middle blocker Jasmin Perry’s college career has been marred with injuries, but she has remained relatively healthy this season which has allowed her to showcase her abilities as a player.

“I have had a lot of injuries throughout my college career and now I am finally healthy,” Perry said.

Although Perry’s team is 3-16, the Bowie, Md. native has found individual success this season.

On Sept. 19, Perry was named to the University of New Hampshire/Merrimack All-Tournament Team.

Over the course of three matches against Merrimack, the University of New Hampshire, and Rhode Island, Perry recorded 22 kills on 41 attack attempts, five digs, five blocks, and only three hitting errors.

Her team went 1-2 in the tournament.

In the team’s first Mid-Eastern Athletic Conference (MEAC) match of the season, a 3-0 loss against North Carolina Central on Sept. 24, Perry had a career-best .727 attack percentage as she recorded eight kills on 11 attacks and had no errors.

Perry’s journey towards becoming a collegiate volleyball player began during her sophomore year at Bowie High School in Bowie, Md.

Growing up, basketball was Perry’s main focus, but she decided to give volleyball a try after her mother, Ay, a former volleyball player, recommended the sport to her.

Perry was a two-sport letter winner in volleyball and track and field in high school.

During her junior season, her volleyball team accumulated a 20-3 record and won the Prince George’s County championship and regional title.

Her team had a 33-9 combined record between her junior and senior seasons.

Perry chose to play volleyball at Morgan State after she had an enjoyable recruitment visit.

“I just really wanted to be a part of the team after bonding with some players during a recruitment visit,” Perry said.

During her freshman season at Morgan, Perry was named a second-team Morgan All-Academic selection, but she missed the entire season due to an injury.

As a sophomore, she was a MEAC Volleyball All-Academic selection and a member of the Lady Bears team that competed in the MEAC Championship game against Howard University.

She played in 50 sets during her second season and recorded 43 kills and 16 blocks.

In the Spring 2021 season, Perry started in four matches and had a season-high eight kills and a .429 hitting percentage in a match against Coppin State on March 22.

Lady Bears head coach Ramona Riley-Bozier described Perry as a naturally quiet person but said that she has become a vocal leader this season.

Riley-Bozier added that Perry is a role model for other players on the team because she has remained resilient despite battling injuries.

“Even though Jasmin is a senior, she has the amount of experience as a freshman because of the lack of games she has played because of injuries,” Riley-Bozier said.

Sophomore outside hitter Jourdan Page, Perry’s roommate, said she admired Perry because of her ability to remain positive despite having an injury-plagued college career.

She also said that she will miss playing with Perry next season.

“I will miss playing with her next year and the energy she brings,” Page said.

Perry and her team will have a chance to improve their conference record to 2-4 when they face Delaware State (18-1 overall, 6-0 MEAC) on Friday at 6 p.m. in Hill Field House.