University Choir performs for first time since the COVID-19 pandemic

In their first performance since the COVID-19 pandemic began, the university choir performed in the academic quad for the University’s Fine and Performing Arts Convocation. 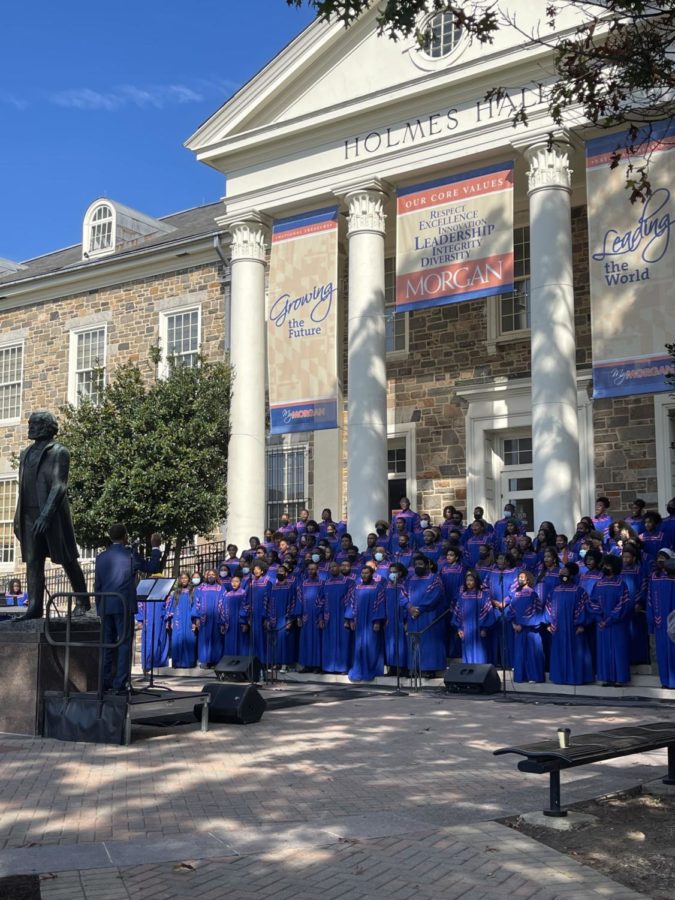 The university choir performed in person for the first time since the COVID-19 pandemic.

Morgan State University’s Choir performed on the steps of Holmes Hall Thursday morning in celebration of the University’s Fine and Performing Arts Convocation.

It was the choir’s first performance together since the beginning of the COVID-19 pandemic and their first time performing in front of Holmes Hall.

Conway said, “Dr. Wilson, in his wisdom, suggested that the Morgan Choir have an outdoor concert for students that have never heard the Morgan State University Choir.”

“We have never performed in front of Holmes Hall ever, so this is the first time in history the Morgan State Choir has done this before,” he continued.

Wilson said a performance from the university choir was just what Morgan needed to celebrate the fine arts department for the Fine and Performing Arts Convocation.

“I thought, you know, to begin to heal the Morgan family, what better place, if we could not go indoors, to have the first live concert of the year on the steps of the historic Holmes Hall right behind the statue of the Frederick Douglass,” Wilson said.

The choir led with the Black National Anthem “Lift Every Voice and Sing” by J. Rosamond Johnson and James Weldon Johnson, followed by soulful songs such as “Every Time I Feel the Spirit” by Moses Hogan and “Heal the World” by Michael Jackson, and ended with “The Battle Hymn of Republic.”

The university choir contained about 80 voices and was joined by Morgan’s Jazz Band Ensemble.

Bethany Gibson, freshman music major, spoke on the importance of the convocation and what it means to return to in-person performances.

“Convocation was important this year because it allowed people to finally come together in person to celebrate the new school year rather than through a screen.” Gibson said, “It also resembles the coming out the brighter side of this pandemic.”

The university choir’s next performance is scheduled for Sunday where a group of its members will perform the National Anthem at M&T Bank Stadium for the Baltimore Ravens and the Los Angeles Chargers game.

The choir has also been invited to perform in Hawaii for the 80th anniversary of the bombing of Pearl Harbor at the end of the year.