In the annual fall town hall, President David Wilson informed the Morgan community of upcoming plans and updates for the university. 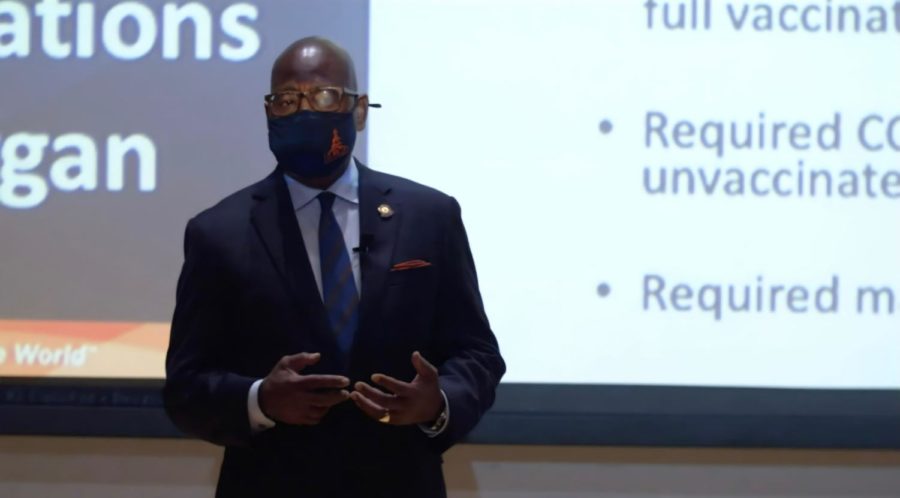 The fall 2021 town hall was held in person at the University Student Center Theatre and also livestreamed on Morgan State University's YouTube channel.

At his ‘State of the University,’ Wilson was joined by students in-person and virtually via live stream for the first town hall of the academic year.

The president briefed on several topics such as public safety at Morgan, increased enrollment rates, investment in future facilities, and an update on the Northwood construction.

Upon student move in, there were several housing assignments in the apartment complex that were not prepared for students. Some of the apartment units contained trash, clothes, and food remnants from previous residents.

As president of the university, Wilson took full responsibility.

“The bottom line is that we did not live up to one of our core values, excellence,” said Wilson. “And so, I do want to take this opportunity to apologize to those students who returned to those facilities, and they were not ready for them to move into them.”

“That’s not who we are here at Morgan, and we don’t own any of that to carry into our future,” Wilson added.
Morgan’s plans for continued housing overage
After receiving a record high of housing applications, Morgan experienced another housing overage going into the fall semester. The university implemented a waiting list for applications because there were more applications than available housing assignments.

Due to the influx of housing requests, the university had to acquire housing for 376 students at the Delta Hotels by Marriot located 4.3 miles from campus.

The university is planning to house up to 270 more students at the Delta Hotel and Altus Apartments. Morgan has also explored securing additional housing at HH Midtown.

While going through the on-campus residence halls options, Wilson stated the university does not plan to keep O’Connell Hall in its long-term housing options.

“In phase two of our housing, we are looking at the possibility that we will raise O’Connell Hall and build another perhaps student housing facility, similar to what you see going up as the new Thurgood Marshall Hall,” Wilson said.

This fall, Morgan is distributing over $6.25 million to 70 percent of the student body. Students are deemed eligible for the funding based on their expected family contribution.

“The bottom line here is that over 70 percent of all students at Morgan are getting financial assistance that you do not have to pay back,” Wilson said, “And I want to be very very clear about that.”
Update on Northwood Plaza construction
Northwood Plaza’s construction is set to be finished by next fall with several additions coming nearby Morgan’s campus.

As for the shopping center, Northwood Plaza will include a Chipotle, iHop, DTLR, Tropical Smoothie Café, Lidl supermarket, Barnes and Noble Bookstore and more.

In addition to the new services moving to Northwood, the university bookstore will relocate to the shopping complex at the Barnes and Noble Bookstore.

Wilson said the plan is to move the bookstore and fill the space with a new fitness center in the University Student Center for students to utilize and work out in.

Wilson said, “Hopefully this transition will take place, we move our bookstore, out of the Student Center, across the street to this location, and then we will go in there and make the fitness center.”

Wilson said all the Northwood renovations will be finished within the next year.
New buildings coming to Morgan’s campus
The university has several new buildings in the works to appear on campus in the near future. On Sept. 30, Morgan held a groundbreaking ceremony for the new Health and Human Services building.

The $171 million building will house the counseling center and Center for Urban Health and Equity. Morgan’s newest addition is expected to be finished by summer 2024.

In addition to the Health and Human Services building, the university plans to add a new science building to the campus as well.

The new science building will be located at the Washington Service Center, on the corner of Stadium Way and East Cold Spring Lane.

Wilson expects the building to be complete between late 2026 and mid 2027.

The university will soon establish its School of Osteopathic Medicine, a medical school that will train primary care physicians.

“We just received word from them today that their application has been approved by the National Commission, and they want to move forward now and start this process,” Wilson said.

Morgan plans to pull down the Montebello Complex and develop the new medical school in that space.

Wilson expects the school will enroll its first class of medical students in the fall of 2024.

Additionally, Wilson stated Morgan is in negotiations with the city of Baltimore about acquiring the property of Lake Clifton. Located 1.5 miles down Hillen Road, the university planned to utilize the 55 acres site to build a multipurpose convocation center.

“It is our intent to build the first building on that site and it will be a multipurpose convocation center, that could house between 12,000 and 15,000 people where we could have major events there.” Wilson said, “Our athletic teams who have an incredible place to play and then we’ll build out that particular campus as we move forward.”