The Bears' mental errors, a standout performance from running back Jabriel Johnson, and more. Here are the top five takeaways from Saturday’s game. 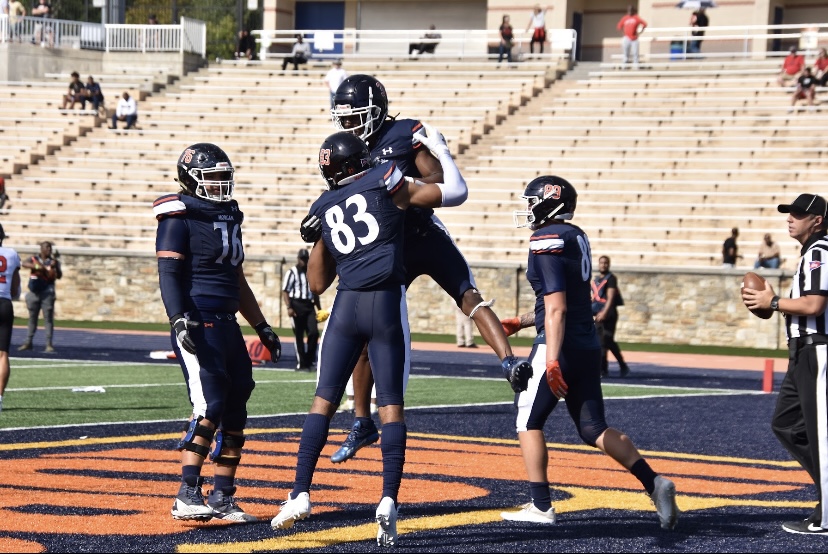 Morgan wide receiver Wesley Wolfolk had two catches for 49 yards including a 19-yard touchdown reception in the Bears' 27-14 loss against Saint Francis.

Morgan State lost their fourth game of the season as they fell 27-14 to the Saint Francis Red Flash on Saturday in Hughes Stadium.

Despite the final outcome, Morgan was able to keep things competitive in the first half as the score was 7-7 after two quarters.

However, after being outscored 20-7 in the second half, Morgan dropped to 0-4 on the season.

Here are five takeaways from Saturday’s game.
Morgan commits mental errors in crucial situations
Throughout the game, Saint Francis capitalized off of mental errors by Morgan’s defense to score points.

Saint Francis’ first touchdown drive of the game, which occurred in the second quarter, was aided by a personal foul penalty as well as an offside penalty by Morgan.

Saint Francis’ first drive of the second half, which ended in a made field goal, was also aided by an offside penalty committed by Morgan defensive lineman Marcus Coleman.

“Some things we can clean up is…these mental errors,” linebacker Lawrence Richardson said. “Once everybody is locked in, we can do our job.”
Running back Jabriel Johnson has big day
Jabriel Johnson, sophomore running back, rushed for a season-high 106 yards on 12 carries Saturday. His longest rush of the game was 44 yards.

Johnson’s 106 rushing yards were the most by a Morgan running back since Josh Chase ran for 145 yards on Morgan’s 2019 homecoming game against Delaware State on Oct. 12, 2019.

“I was just being patient and hitting my holes,” Johnson said.

Morgan’s offense is averaging only 10.25 points per game this season.

Wheatley believes the team needs to limit their mental mistakes in order to put more points on the board.

When asked what the offense needs to do to score more points, Wheatley said “cut down on mental errors.”
Morgan’s defense struggles in second half
After surrendering one touchdown in the first half, Morgan’s defense allowed 20 points in the second half.

Saint Francis scored on their first four possessions of the second half.

Saint Francis quarterback Justin Sliwoski completed 9 of 13 passes for 114 yards with one touchdown pass in the second half. He also accumulated 49 rushing yards on two rushing attempts in the half.

Richardson said that Saint Francis’ offense wasn’t doing anything drastically different in the second half. He believes the defense’s errors led to the Red Flash scoring.

With 12:02 left in the second quarter, Akubuo missed a 47-yard field goal which would have given the Bears a 3-0 lead.