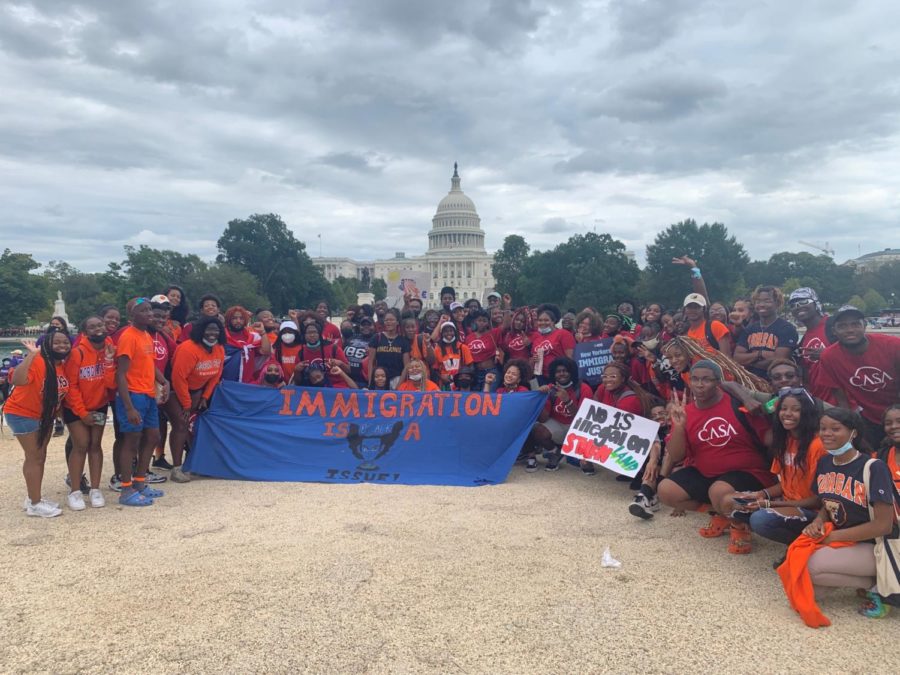 Over 100 students joined Morelys Urbano and the Central American Solidarity Association in protesting for immigration reform in Washington D.C. on Sept. 21.

As an undocumented immigrant, immigration rights is a topic that is close to freshman Morelys Urbano. The multimedia journalism major’s experience being undocumented has shaped her perspective on immigration reform.

When the U.S. Senate blocked immigration reform from the $3.5 trillion reconciliation package, Urbano wanted to draw its attention to the Morgan community.

In response to the U.S. Senate’s proposal rejection, the Central American Solidarity Association (CASA) organized a protest in Washington D.C. to demand a pathway to citizenship for immigrants.

Urbano worked tirelessly with CASA to send over 100 Morgan students to the March for Citizenship, Care and Climate protest on Tuesday in Washington, D.C.

She began working with the largest immigrant advocacy organization in the Mid-Atlantic over three years ago through an after-school program.

Through her partnership with CASA, she was able to organize transportation for 132 Morgan students to go to Washington D.C. on four full coach buses.

By bringing the protest to Morgan, she wanted to raise awareness on immigration, create programs for students like her on campus, and open the conversation on immigration reform.

Urbano said, “We want to make sure our voices are heard by Congress; therefore, our attention is not going to be on law enforcement. We are going to focus on climate change and justice, care, and immigration reform.”

As Baltimore is a sanctuary city, Urbanos hopes to bring awareness to undocumented students at Morgan and the accommodations they need.

“We want to make sure our voices are heard by Congress; therefore, our attention is not going to be on law enforcement.” Urbano said, “We are going to focus on climate change and justice, care, and immigration reform.”

Urbano’s focus comes from the Senate’s $3.5 trillion package proposal that intended to include a pathway to citizenship for undocumented immigrants. However, the proposal was turned down by the U.S. Senate parliamentarian on Sunday.

Tuesday’s protest also coincided with the recent merge of Haitian migrants crowded under a Texas bridge earlier this week.

U.S. border guards were pictured using whips against thousands of Haitian migrants, which sparked conversation about immigration reform and conditions at the border.

With good cause, the protest was fueled with so much energy, especially by Morgan students who had the highest turnout over any other organization or university. Students sang the “We Are the Bears” chant passionately and showed everyone who and what Morgan represents.

“I enjoyed seeing multiple communities and organizations come together to help,” Thompson said. “I learned that we, the people, need to focus more on our House of Representatives and Congress because they are the closest to us and can actually help aid us in making change.”

Urbano was assisted by Sandy Owusuansah, who currently serves as Miss Freshman at Morgan. Owusuansah encounters immigration on a personal level as she is the daughter of two immigrants.

Owusuansah said, “I’ve always been very involved with activism. Immigration is a very important issue so when I found out that Morelys worked with CASA and she introduced the protest to me I was on board right away. Being the child of two immigrant parents I understand the struggle and I’ve witnessed it firsthand.”

Although Tuesday’s protest is over, Urbano wants the students of Morgan State to stay involved in activism and immigration reform.

She said, “Keep getting involved like we have a huge campus. My experience after this protest and seeing everyone’s support is just like, we are powerful. Here at Morgan, we are powerful. We can make anything happen, so that is just reason enough for you to get involved.”