Boudreau's journey to starting quarterback at Morgan is fueled by past experiences and his desire to refute critics. 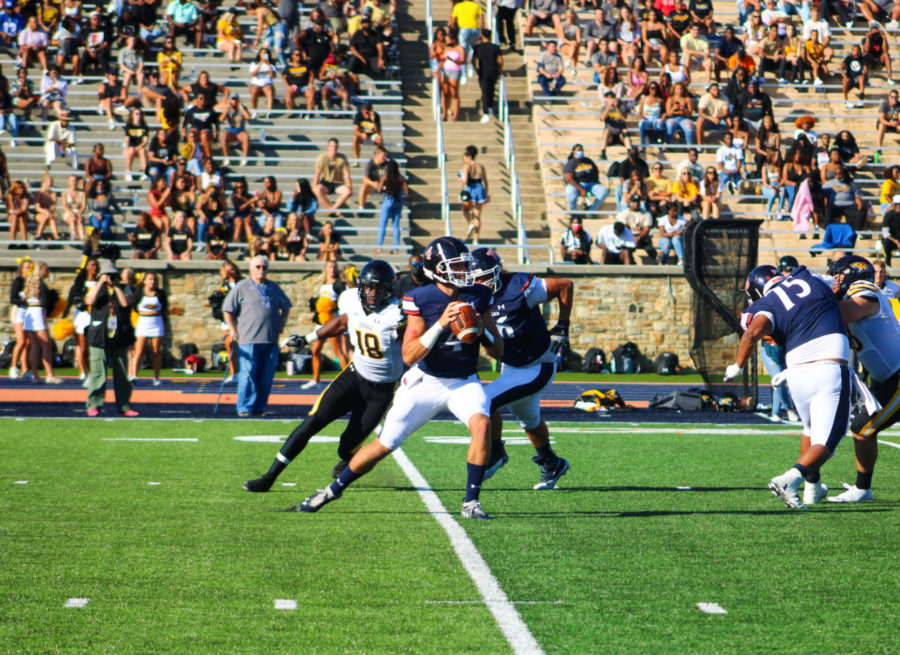 Neil Bourdeau in his first game as starting quarterback against Towson University.

Morgan State quarterback Neil Boudreau cherishes being an underdog. The graduate transfer’s desire to prove critics wrong played a part in his decision to come to Morgan.

“Everyone on this team is underdogs because we weren’t recruited by the bigger schools,” Boudreau said.

Boudreau went from not being played in his desired position at San Diego State University to making his mark as Morgan’s starting quarterback this year.

Prior to joining the Bears, Boudreau played football, basketball and baseball at University High School in Irvine, Cal.

He played quarterback for the varsity football team for three seasons and finished his high school career in 2016 with 1,309 passing yards and 11 touchdown passes.

Boudreau then went on to play football at the collegiate level at San Diego State where he aspired to play quarterback for the team.

However, he never saw any game action as quarterback in his four seasons with the Aztecs. Boudreau was relegated to playing punter and safety.

Boudreau then entered the transfer portal seeking an opportunity to become a college quarterback.

He ultimately decided to join Morgan’s football team because he felt like it would allow him to showcase his abilities as quarterback.

“When I talked to Morgan’s coaches, I felt like it was a better fit,” Boudreau said. “I believe that it was the best chance for me to get on the field and play quarterback.”

One football player Boudreau looks up to is Tom Brady, seven-time Super Bowl Champion. Boudreau admires how Brady went from being the 199th pick in the 2000 draft to arguably the greatest quarterback ever.

Boudreau added that he models his game after Buffalo Bills quarterback Josh Allen.

“What Josh has been able to do in the NFL is someone that I want to be like,” Boudreau said.

Allen, who attended the University of Wyoming from 2015 to 2017, was coached by current Morgan offensive coordinator and quarterbacks coach Josh Firm.

Firm said the two quarterbacks have a similar mental makeup, but he wants Boudreau to work on holding his teammates accountable.

“Neil needs to improve on not being a people pleaser,” Firm said. “If you want to be a great quarterback, you have to be okay with offending some people.”

After a lengthy process of working for his position, Boudreau earned the starting quarterback position in Morgan’s summer training camp.

One person who was impressed by Boudreau’s performance in training camp is Morgan play-by-play announcer Lamont Germany.

“He seems to have a lot of chemistry with the wide receivers,” Germany said.

After a strong training camp, Boudreau (2-for-9 for 4 yards) struggled in the Bears’ first game of the season on Sept. 4; a 31-0 loss against Towson University.

Boudreau bounced back in the Bears’ second game of the season against Tulane on Sept. 11 despite not starting at quarterback.

Although the Bears lost the game 69-20, Boudreau completed 17 of 26 passes for 184 yards. He also threw three touchdown passes, including the first of his career, which tied for the most by a Morgan quarterback in three years.

“It was awesome,” Boudreau said regarding the first touchdown pass of his career. “It felt like a lot of time and effort went into that.”

While Boudreau has shown flashes of his skills at quarterback, he has been unable to lead the Bears to a victory yet.

With the team currently 0-3 and in a bye week, now could be the perfect time for Boudreau to prepare himself for a breakout performance.