A glance inside the mindset of head football coach Tyrone Wheatley

‘No matter what situation you’re going through, it can’t last forever’: Tyrone Wheatley reflects on past life experiences that shaped him as an athlete and coach. 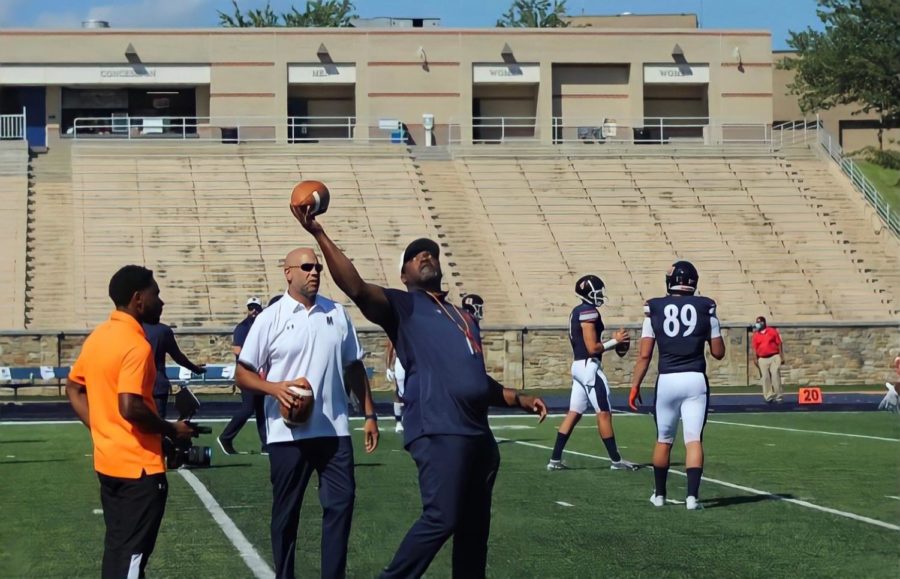 Wheatley’s upbringing in the blue-collar town Inkster, Mich. played a large role in his determined mindset.

Born in 1972, Wheatley lost his father to gun violence at the age of two. A decade later, his stepfather also died.

After his mother developed a substance abuse problem, Wheatley was raised by his grandmother who taught him to approach everything he did with an aggressive mindset and not to be afraid of taking risks.

Wheatley’s determination only strengthened with time as he became a four-sport athlete at Robichaud High School in Dearborn Heights, Mich. During the early 1990s, he played football, basketball, and was a member of the track and field team.

“Robichaud built me Ford tough to withstand anything,” Wheatley said. “No matter what situation you’re going through, it can’t last forever.”

At Robichaud, Wheatley received tough love from his teachers and academic advisors such as Millie Hursin who helped shape him as a person and future coach.

“It was more tough love than anything,” Wheatley said. “Robichaud is still pumping through my veins.”

Nearly three decades after his high school football career ended, Wheatley became the head coach of Morgan’s football team in 2019 despite the team being in the midst of a rebuild.

“Everyone says to never be a first-year head coach during a rebuild,” Wheatley said, “but I took the job.”

Wheatley is now in his third year as head coach of the Bears and has a 3-11 record. During his second year, the football team did not compete in any games because of the COVID-19 pandemic.

Despite Wheatley’s record as head coach, he is still confident that he can help Morgan become a winning program again.

When asked what it would take to get the team to winning football games again, Wheatley simply said “time”.

In order to help the football team achieve its goals, Wheatley is implementing the lessons he learned during his upbringing such as having an aggressive mindset.

Wheatley’s life experiences continue to shape him as a person but will also have a lasting effect on his players at Morgan.

Devan Hebron, redshirt junior linebacker, received a full scholarship from Wheatley in 2019. He said his coach taught him different components of football to improve his game.

“He helped me improve on my game,” Hebron said. “The way I think, technique, fundamentals, play smarter, faster, and aggressive.”

Quarterback Neil Boudreau said that Wheatley’s perspective on life has helped him improve as a player.

“Coach Wheatley has helped me and I’m sure a lot of my teammates improve from just the perspective he has on life,” Boudreau said. “Seeing his perspective on life is just awesome for a lot of guys on our team because he made his own way in life.”

Wheatley and the Bears are set to face Sacred Heart this Saturday at 1 p.m. The game is being streamed on WEAA.org as well as HSRN.com. A live broadcast can be listened to on 88.9 FM.