The Rundown on the I Love Morgan Week Events 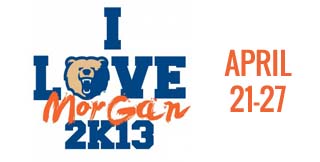 Are you curious about exactly what some of the festivities for I Love Morgan Week are about? The Spokesman sat down with Umoja Council Director Shakema Cyrus to get the rundown on the meaning of the events behind the catchy titles.

BYOB “Be Your Own Boss”

“BYOB is pretty much going to be under the health awareness division in SGA. We know I Love Morgan Week is a week where all college students (especially at Morgan and other participating universities around the area) come to our events. College students like to go out and have a good time and their going to be drinking. BYOB is pretty much spreading awareness of drunk driving. We want to let everyone know at the beginning of the week that if you’re going to go out and drink to enjoy the festivities, drink responsibly. ”

“It’s not really an Umoja council event. It’s usually by Thompson Hospitality every year. Their talent showcase is to come to Morgan, see what talent we have on our campus and showcase it to the rest of the university. Food is provided.”

” We were just sitting around talking about all the different games we use to play when we were little kids, and alot of students- even though we’re in college we can have fun too…we wanted to have something that was interactive and sort of like a field day. So we figured why not have a day where we can play the games like hulahoop, hopskotch, doubledutch, tag and stuff like that.”

“We noticed that the majority of the students on campus are into gogo and reggae, because its a heavy population of New York students and PG/DC students. So we figured, why not use some of the dj’s that are very well known on campus and have them do a battle using those two genres of music.”

“I envisioned a block party. Usually we have it inside the stadium but I wanted something that would be a little more lively, and I wanted something more interactive. This year you can expect to see a campus-wide block party. It’s going to be from the beginning of the welcome bridge all the way to the hill field house. It’s going to be carnival games, funnel cake, snow cones, cotton candy, vendors like homecoming, music setup and a lot of different interactive stuff. This year we decided to implement something new that we hope will continue for the years to come and probably be implemented into the student syllabus. It’s also going to be a day of community service, so we’re having a wonderful day for you guys to enjoy yourselves. We feel it’s best to give back to Morgan and the Baltimore community at large.”

“We know that usually we go to Kings Dominion and a lot of students wanted to go some place different. We took that into consideration and we made sure that we were able to get to Six Flags in New Jersey, which is one of the biggest Six Flags. We made sure that we catered to the students because that’s what Umoja Council is supposed to do, and create unity. We pretty much went with what the students wanted.”