Since the pandemic started, at least two Black owned, at-home practices have popped up in Maryland as more Black mothers opt for at-home births. 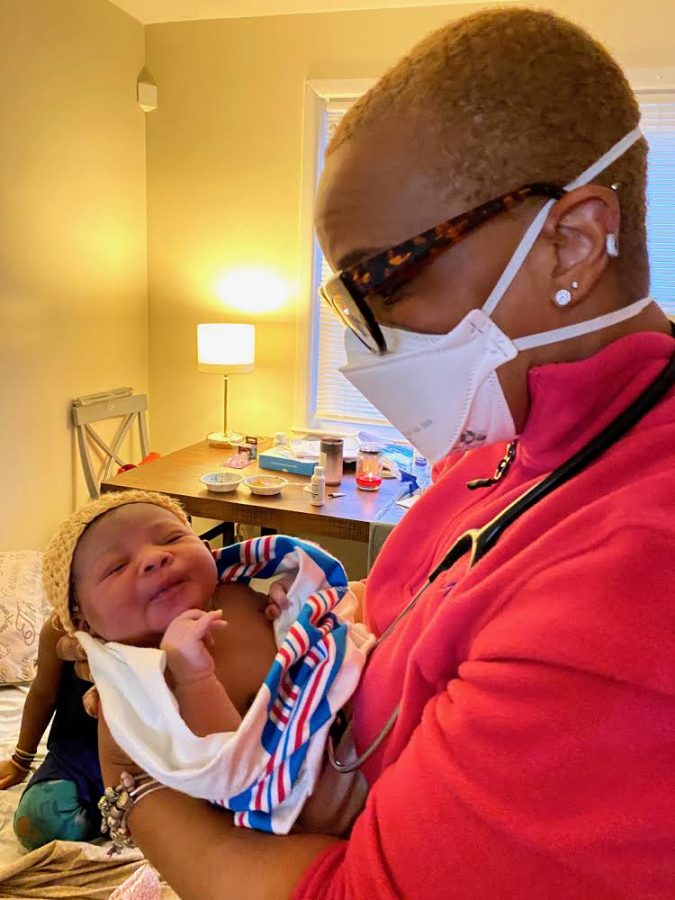 A masked Nikki Christian-Genius holds a baby in her arms after completing a home birth.

Baltimore-native Nikki Christian-Genius, 48, has been a midwife for over two decades, taking care of patients from one hospital to another. But last September, she left Mercy Medical Center Hospital in Baltimore County to open an in-home midwifery practice called Faith, Hope and Love Midwifery Services in Baltimore County.

Her practice strives to provide access to women’s health and promote reproductive health through gynecology services, pregnancy, birth and labor services and postpartum and newborn care. For Christain-Genius, one of two Black professionals to graduate in the first doctorate program for midwifery at Jefferson (Philadelphia University + Thomas Jefferson University), providing a safe delivery for the mother and baby is her top priority.

“Starting a home birth practice creates more access particularly for those women seeking midwife care, not afraid to birth inside their homes; strongly motivated to birth in their homes,” she said.

Christain-Genius said that the pandemic led to an increase in the number of women she was treating—particularly Black women.

As COVID-19 overwhelmed local hospitals, some mothers had to give birth by themselves due to the pandemic’s restrictions, more Black mothers who would have otherwise chosen hospital births began giving birth within their home.

“If you gave birth in the hospital in the past year you were by yourself and pregnant women need support,” said Jan Kriebs, a certified nurse-midwife and professor at the Midwifery Institute at Jefferson University. “Birth is not designed to be an isolated event.”

Kriebs, who sat on the Maryland Maternal Mortality 2019 Annual Review as an abstractor, gathered death certificates, hospital records and other available materials for the state’s 2017 pregnancy-related deaths. While the data won’t be available anytime soon, she noted that mothers were moving away from hospitals due to coronavirus concerns.

As a result, many are turning their backs on a healthcare system that contributes to a Black mother’s maternal mortality rate that is 2.4 times greater than a white mothers, a disparity that has persisted since the 1940s, according to the 2019 Maryland Maternal Mortality Annual Review.

According to Kriebs, who also sits on the board of certified professional midwives (CPM), Christian-Genius’ practice follows an uptake in increased licensure in Maryland, meaning more new in-home birthing practices are popping up.

The Listening to Mothers in California survey, led by the National Partnership for Women and Families found that more than 10 percent of Black mothers reported mistreatment during their hospital stay because of their race or ethnicity compared to one percent of white mothers who said the same.

“What I have done is tackle, as best I could, this idea of helping to eradicate these racial disparities generally speaking with the maternal and infant mortality rates of Black women,” Christian-Genius said.

With the help of her birthing team, Christian-Genius delivers one to two births a month. She said when a delivery is expected, she keeps her phone close to receive updates from her team and arrives when the mother is in active labor.

But many mothers have not been so lucky.

Lauren Arrington, 42, a Baltimore-based certified nurse-midwife cited the lack of quality of care across health care facilities as the culprit of death for many Black mothers while working at Maryland General Hospital for four years, a predominantly Black-serving hospital in West Baltimore.

“The high-serving Black people hospital, that’s the place I saw people die,” said Arrington, who now works at the University of Maryland St. Joseph Medical Center located in Towson. “I think because we didn’t have that many health care providers there.”

Thomas, 28, said she had the opportunity to choose who she wanted to be induced with and once it was time to deliver her baby in May, she chose a white midwife.

“St. Joseph is predominantly white and they never failed me there,” she said. “I felt like they always gave me the best care, I always saw results, I always had a great time and then me having my baby there just topped the charts.”

Thomas, a Baltimore native, said she specifically chose the University of Maryland St. Joseph Medical Center because she felt she would receive better care there.

According to Arrington, the difference in care is due to a lack of standardized care across facilities.

A woman’s chance of dying during pregnancy and childbirth is closely connected to her social and economic status, the norms and values of her culture and the geographic remoteness of her home, according to the United Nations Population Fund.

“The fact that Black people have poorer outcomes for certain things is not a reflection of their race, it’s a reflection of how they’re treated because of their socially defined race and that does have real health impacts,” Arrington said.

Arrington keeps this in mind when she’s treating patients of color.

“Black people have been so mistreated when it comes to reproductive health,” she said.

But in the state of Maryland where the white maternal mortality rate has decreased 35.4 percent and Black maternal mortality has increased by 11.9 percent from 2008 to 2017, further increasing the racial disparity, local midwives like Christain-Genius are working to combat the statistics one birth at a time.

“Every delivery is amazing to me, it still hasn’t gotten old after all these years,” Christain-Genius said. “I still get the same feeling that I did on day one and that is the need to fight back tears because of how beautiful the whole process.”

This story is a part of “Black Health Matters,” a year-long reporting program through The Poynter Institute’s College Media Project. The project’s objective: to tell health related stories through the lens of Black college students, while examining possible solutions.