Funmike Lagoke says her time at Morgan helped her embrace her voice. 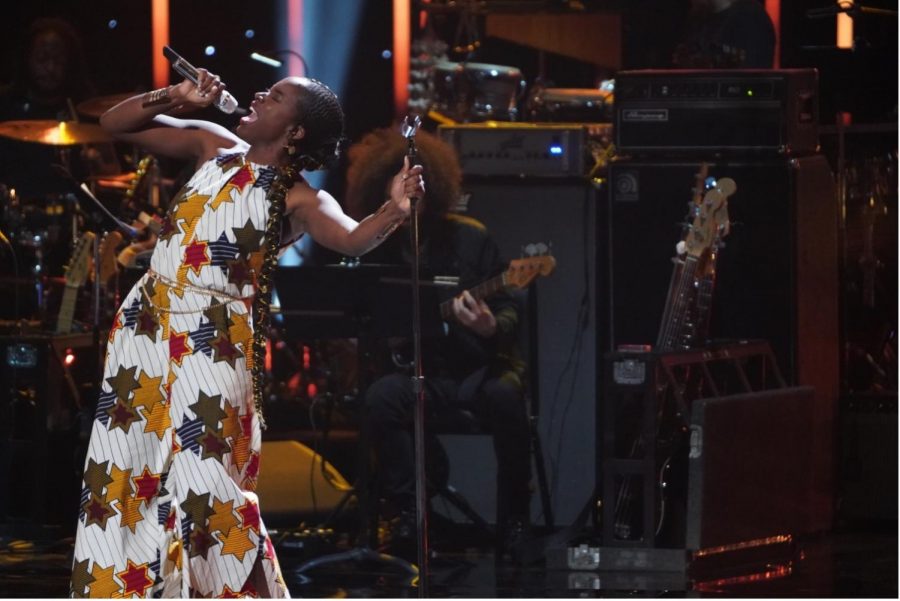 Morgan State alumna Funmike Lagoke, 28, also known as “Funke,”  garnered support from the Morgan and Nigerian communities as a contestant on season 19 of American Idol, the televised singing competition on ABC.

Born In Washington, D.C. but raised in Nigeria and London, Lagoke, is no stranger to being in the spotlight. The current Miss Nigeria participated in the Morgan State choir. A classically trained vocalist, Lagoke made her debut with the Philadelphia Orchestra as a featured soloist in Hannibal Lokumbe’s “Healing Tones.”

But she wanted to branch out beyond classical music, so she auditioned for performances outside her comfort zone.

“I hit a roadblock where I was like, I just feel like I am supposed to be doing more,” Lagoke said.

When she stumbled upon American Idol, she was wary of television shows, but decided to give it a try and “see what happens.”

“It’s one in a million for someone to really get on this show,” she said.

Last year, the ABC show announced American Idol 2020 auditions would take place throughout the summer and early fall of 2019 in more than 20 U.S. cities via Zoom.

After her audition, the judge told her that they would be in touch, but she thought to herself, “they always say that.”

Lagoke was at the gym when she received an email asking her to send more material because the producers were interested in her. She couldn’t believe it.

It was not a guarantee until she received the congratulations email stating that she would be auditioning in front of  Lionel Ritchie, Katy Perry, and Luke Bryan.

Lagoke went to San Diego, Calif. and sang “A Song For You,” by Donny Hathaway for the judges.

Lagoke said she has always misunderstood her voice, but learned to appreciate its richness while attending Morgan with the help of her mentor Thaddeus Price Jr.

Price who currently works at Morgan in the Office of Student Success and Retention has worked and coached Lagoke since she was 14.

“She is a special rare talent,” Price said. “I could never be more proud.”

Lagoke said that after she finished singing the song, Katy Perry asked her if she was a baritone.

Lagoke recalls Perry telling her that she had an ace card with a voice that could sing as low as a baritone and as high as a soprano.

“No one is doing that,” she remembered Perry saying.

After a few vocal exercises to test her range, Lagoke received approval from three judges and a golden ticket.

She was off to Hollywood.

For Lagoke, the transition from being a in the choir to performing on a television produced singing competition was the most significant 360-degree circle of her life.

“I had to learn about what it was they wanted, the song choice, the voice type, the image,” Lagoke said.

Being interviewed regularly, getting up early and staying up late for rehearsals was a dramatic change for Lagoke.

“I was treated like a little star,” she said. “I didn’t know that experience.”

She made it past the first round with positive feedback from the judges, but was rushed to the hospital when she fainted from dehydration after the duet round.

She was able to advance to the “Show Stopper” round before facing elminination on March 29.

Although she didn’t win, Lagoke said she did not regret a minute of her time on the show.

“I am forever grateful for the experience because it is an eyeopener,” she said.

Lagoke, who has been a music teacher in Baltimore City Schools for the past seven years, has no plans to return to a competition like Idol, but has other things in the works. Next month, she plans to release an EP featuring Afrobeats. Through the entire experience, she felt the overwhelming support of her Nigerian supporters.

“People have just filled my heart with so much love and messages and well wishes,” she said. “I am so filled and grateful.”