Calvin Tyler only spent two years at Morgan before he had to drop out for financial reasons, more than 60 years later, he and his wife Tina Tyler, have donated more than $20 million to the university. 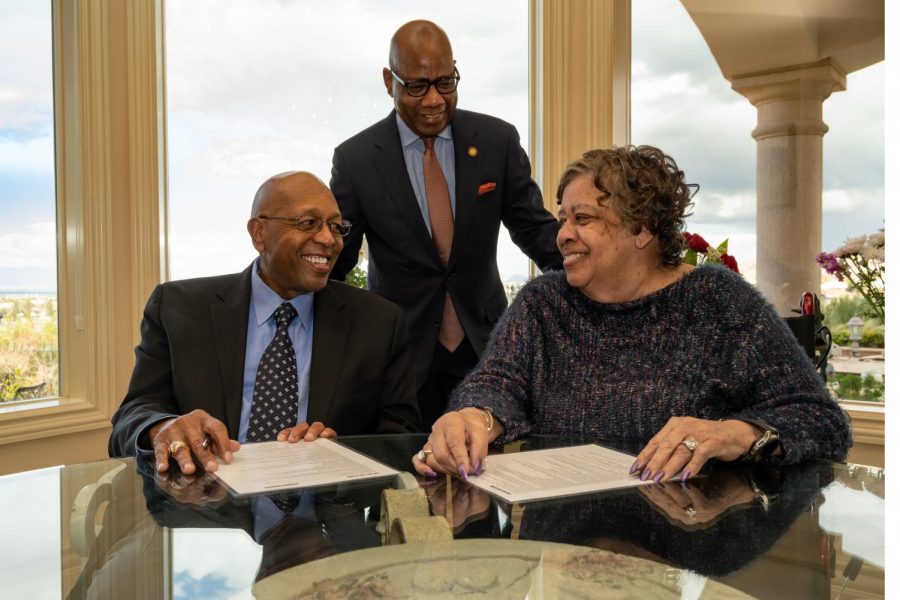 In 1948, Calvin Tyler’s father took him to see the Brooklyn Dodgers play an exhibition game. At that game, he saw a man who would become his role model as he grew into adulthood, Jackie Robinson.

“[Robinson] broke barriers and did it in a professional way,” Tyler, 78, said. “He had thick skin and a lot of pride.”

What Tyler didn’t know at the time was that he would go on to break barriers of his own decades later. Today, he’s one of Morgan State University’s biggest benefactors. Calvin Tyler and his wife Tina Tyler have consistently donated to Morgan over the years. In February, the Tylers put $20 million towards an endowed scholarship fund founded in their name to provide students in need with financial aid through scholarships.

He grew up on Mondawmin Avenue in a lower-income West Baltimore household. As a reserved young boy, he dreamed of becoming a businessman as he delivered for newspapers and drugstores. Tyler’s mother, a nurse’s aide, and father, a lineman, stressed the importance of integrity and honesty at an early age.

“They impressed upon me an extreme work ethic [and] to work hard at anything I did,” Tyler said.

Tyler attended Morgan from 1960 to 1963. He studied business administration, but often had to take breaks for financial reasons.

“If you were a young person in the 50s or 60s in Baltimore, Morgan State was the place to be,” he said.

During that time, Morgan students staged sit-ins that led to the desegregation of many of the city’s stores.

He aspired to own his own business or manage a company, but eventually dropped out because he couldn’t afford tuition.

“I hated that I had to drop out, but I had to make a living too,” he said.

“[Tina] was very supportive of me and my career, and so I don’t think I could accomplish everything I did without her help and support,” he said. “We’re a team.”

Within two years, Tyler moved up the promotional ladder giving him increased levels of responsibility. He and his wife moved countrywide as he began his 30-year climb to becoming Senior VP.

“UPS has always been a company that promoted from within and offers people who start off in entry-level jobs and opportunity to move up in the country,” he said.

Now retired, Tyler and his wife focus on their philanthropic work across the country. Most of his work is devoted to young people from low-income families and backgrounds similar to how he grew up.

According to University President David Wilson, the Tylers’ investment will have a lasting impact on students. Walking through Morgan’s campus, students often pass infrastructure funded by the philanthropists including the Calvin and Tina Tyler ballroom on the second floor of the student center and Calvin and Tina Tyler Hall, the new student services building located along East Cold Spring Lane.

“When our students walk into that building, and they see this portrait in front of them, I want them to stop, pause, and say ‘I can be on the wall of a building at Morgan one day too,’” Wilson said.

Many believe the Tyler’s have donated solely out of loyalty to Morgan. However, Tyler said his philanthropy is a result of his desire to give back to the greater Baltimore community.

“I know that there are still young people in Baltimore who are talented, bright, who struggle the same way I did years and years ago,” Tyler said. “And so, my passion was to help young people from the inner city of Baltimore.”

According to US News and World Report’s 2020 – 2021 analysis of Free Application for Federal Student Aid (FAFSA), 84% of Morgan students receive need-based financial aid.

“In this case, it’s a fund that will live forever and continue to impact Morgan students and give people a chance to develop and thrive in an educational institution,” said Donna Howard, vice president of Institutional Advancement.

In the spring of 2018, Jayla Oliver, a senior social work major, became a Tyler scholar. Because of the scholarship, Oliver was able to manage college costs better.

I’m very grateful for it,” she said. “I appreciate [them] because of the continuous support that [they] give not only me but most of the Morgan faculty and students.”

Tyler said one of the most satisfying parts of his philanthropic work is interacting with the students who are recipients.

“It feels wonderful to meet with the students who have received our scholarships,” he said. “They feel like not only Tyler scholars but family.”