‘You have to speak out for injustice’: Morgan State President David Wilson’s take on American Democracy

MSU's president talks the incoming administration, the attack on the U.S. Capitol and why everyone should wear a mask. 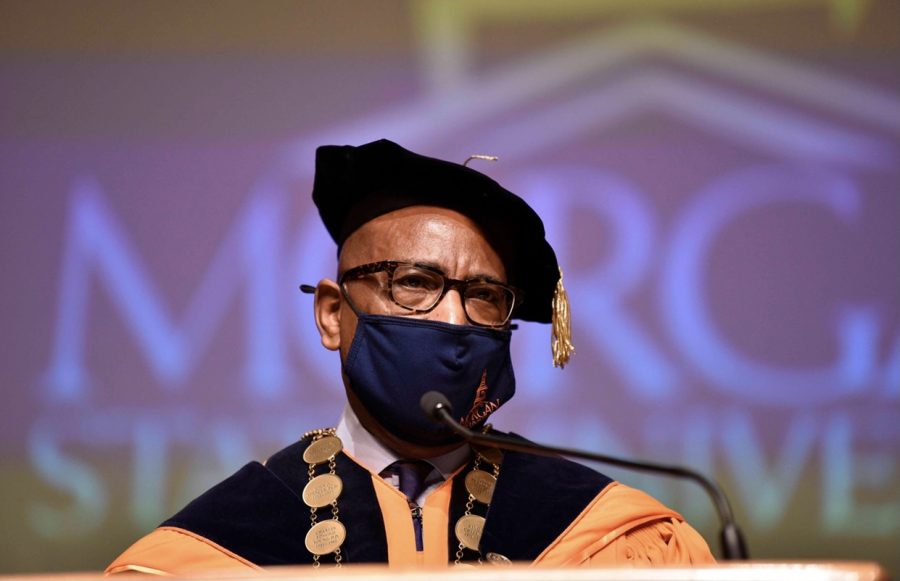 When Donald Trump supporters stormed the U.S. Capitol Building on Wednesday, Jan. 6, Morgan State President David Wilson had just concluded his monthly Student Government Association meeting with student leaders where ironically, democracy was the topic of debate. He proceeded to turn on the television, hoping to watch Congress count the votes of the electoral college, in an attempt to certify the 2020 general election votes which deemed President-elect Joe Biden and Vice President-elect Kamala Harris winners. What he did not imagine is that, for the first time in his life, he would witness a breach of the U.S. Capitol as supporters of Trump overran security officials, scaffolded the U.S. Capitol and broke into the building.

One week later, more than 30 federal criminal defendants were rounded up and six deaths were recorded in connection to the riot, including two U.S. Capitol police officers. 42-year-old Brian D. Sicknick, a U.S. Capitol police officer was struck in the head with a fire extinguisher and rushed to a nearby hospital. He was placed on life support and died the following evening.

On Saturday, Jan. 9, Capitol Police Officer Howard Liebengood, who had been on duty at the Capitol on Wednesday, took his own life, according to his family. He was 51 years old. One day after the riot, Capitol Police Chief Steven Sund announced his resignation and Morgan Alumnus Yogananda Pittman took his place. On Wednesday, Jan. 13, the House voted to impeach Trump for his hand in the deadly Capitol riot, making him the only president in history to be impeached twice.

The editor and chief and managing editor of The MSUSpokesman sat down with Wilson to discuss his thoughts on the historic year of 2020 and his hope for the future. Little was left unsaid as the interview danced between the 2020 general election results, the coronavirus pandemic and the recent storming of the U.S. Capitol. Wilson’s demeanor was serious and solemn as he began the conversation questioning how students have been processing what it means to be an American during the current state of the country’s democracy as the nation prepares for an unprecedented presidential inauguration.

This past election has been unlike any other in a number of ways, from the undercurrent of the COVID-19 pandemic to violent riots at the Capitol. What do you hope that the new administration brings to the White House and the country that may have been missing for the past four years?

Let me start with student loans from the standpoint of college students. Our top priority for this administration is to forgive a huge portion of the incredible debt that students have accumulated to get college degrees. It will be transformational because I know that I have so many students here at Morgan who have accumulated debt to get their degree. We have one of the highest loan averages amongst students in the state of Maryland.

Then there is the matter of tone, respect for our individuals who are different in many dimensions, but we’re all American. When I hear incoming President Biden and incoming Vice President Harris, we are hearing individuals who understand what it means to lead in the United States at the highest level of leadership and to lead in a way that will be respected around the world and not have the world to be laughing at us which, interestingly enough, I know that the world has been laughing at our leadership for the last four years. I don’t think you’re going to see that with a Biden/Harris administration. It means that, based on what I have seen of the appointments of individuals that will be leading our government, that we will have competence again, that people will be in those positions who have the skills to do the job that is demanded of them.

Vice President-elect Kamala Harris is a Howard University graduate and Biden received an honorary doctorate from Morgan. What’s the significance of having two leaders with HBCU ties sitting at the highest offices in the White House?

This is a real special time for this country to have the leadership at the level of president and vice president who both have an incredible relationship to HBCUs. Vice President-elect Kamala Harris is bringing to the White House a lived experience having attended an HBCU at the undergraduate level and by hearing her you know that that was a transformational experience for her, as it was for me in my undergraduate years at Tuskegee Institute. She brings a level of authenticity to the true lived experiences of students at HBCUs. Then, on the other hand, you have President-elect Joe Biden who did not attend an HBCU but, in my view, he is as close as anyone that I know of who did not attend an HBCU but who really understands and values those institutions in a very genuine way.

It means that our institutions, meaning HBCUs, are in a position where if there is a conversation happening at the highest offices in the country about the competitiveness of America, about the centrality of educational preparation to closing the equity gap in America, that conversation is not going to take place without there being a voice representing all of higher education in the room. We have never had that before in these two positions. So, we are very thankful that we have these dynamic world-class leaders and high levels of advocacy on behalf of  HBCUs in America.

In 2017, President-elect Joe Biden gave the commencement address at Morgan. What was the story behind booking the former vice president for that ceremony?

I had been in several audiences where he had spoken nationally, and he would always reflect very fondly on his relationship with Jim Gilliam. Gilliam was a Morgan alum, so was his late wife. His son, Jim Jr. was also a Morgan alum, our college of liberal arts is named after him.

So here I am in these audiences sitting as the president of Morgan and, almost out of the blue, Mr. Biden would start talking about how much he respected HBCUs because his close friends had gone there and when he came back to Delaware to run for office, the late Mr. Gilliam Sr. came to him and said ‘Joe if you really want to win, you can’t do that without those students down at Delaware State.’

Every time I heard him; I heard a genuine person. I heard a person who really understood the value of our institutions and respected them and then I saw a person that Former President Obama had also indicated by selecting him as his vice president, was really understanding of the history and culture of African Americans in this country. So, I thought that he had a great story to tell and I wanted the Morgan State University community to hear his story and special relationship to Morgan.

Last week, Morgan alumnae Yogananda Pittman was named acting chief of the United States Capitol Police. What does that mean for you as university president? Do you know Chief Pittman? Have the two of you ever met/crossed paths?

I want to extend my congratulations to Chief Pittman on assuming the role of acting chief of the U.S. Capitol Police. I am extremely impressed with her background. She’s been in the force now for over 16 or so years at the highest level of leadership beyond the level of chief. We know she received a world-class education here at Morgan as one of our proud 1999 sociology graduates and that she has the kind of experience coupled with that education experience she received at Morgan.

So educationally we know that she has the tools and the toolbox to enable her to provide the kind of solid leadership to law enforcement within the capitol to keep our Congresspeople and their staff safe and the building itself. For me as president of Morgan it just further evidence that Morgan graduates are everywhere and when the opportunity presents itself for them to step up and lead with significance, they do not hesitate and Chief Pittman didn’t hesitate with this call.

What do you think as far as Democrats and Republicans being slit on the subject of mask-wearing? Where do you stand in the matter and why have you chosen partially the bulk of 2020 to raise your voice in what you believe in?

As a university president, I am a student of higher education, history and relevance in the United States. When I look back over the very consequential and significant HBCU presidents, they have not struggled with understanding what comes with the role of prescient when you’re in the seat.

There should be zero debate in this country about whether we should put on a mask. I have no idea how in the heck wearing a mask to protect yourself and to not infect another person has become politicized. That makes no sense. Wearing a mask for me is not a partisan issue, it’s a life and death issue. That is not a blue issue or a red issue.

The coronavirus has disproportionately affected Black and brown people and yet, a large number of those communities are apprehensive about taking the COVID vaccine. Have you or do you plan to take the vaccine? What role do you think the vaccine will play in the country’s progression back to normalcy?

I understand that within the Black community, there is not a high level of trust in vaccination given our history. So with that understanding, I also understand my role as president at Morgan which is to show based on my own taking of the vaccine, that I believe it. I have done as much research as I can do, I trust the science—I trust the scientist. I plan to take the vaccine at the first opportunity that I can get to do that.

We all want to get out of our hemmed-in areas. We all want to reestablish our face to face relationships. We all want to see our friends and family and rekindle those face-to-face personal relationships and I want Morgan to reopen fully. I want to see 8,000 students on my campus every day. I want to hear the yelling. I want to hear the sororities singing and the fraternities stepping and strolling. I want to walk through the Student Center and be able to stop my students and have meaningful conversations and dialogue with them without necessarily worrying about wearing a mask.

And if we all want that, which I think we all do, then I say to our university community, read what you need to read about the ethicality of the vaccine. Once you do, I certainly hope you plan to roll up your sleeve like I plan to roll up mine and take it.