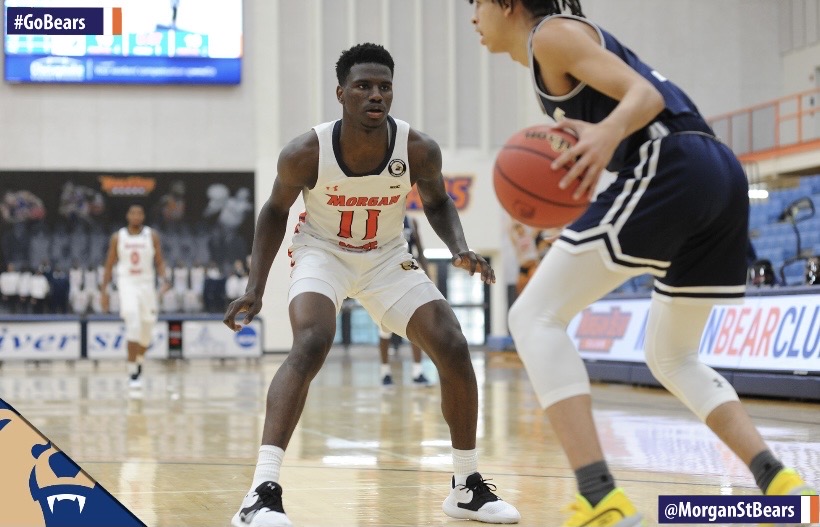 Morgan State’s men’s and women’s basketball teams kicked off their new seasons on Wednesday November 25, in the Hill Field House without spectators due to the coronavirus.

The men’s team played first and faced Mount St. Mary’s Mountaineers. Senior forward Troy Baxter scored the Bears’ first points of the season and finished the first half with 11 points.

“His aggressiveness to get to the basket was really good,” said head coach Kevin Broadus.

But despite Baxter’s strong performance in the first half, the Bears only accumulated two bench points by halftime and were trailing 28-22.

Junior guard Malik Miller’s strong showing in the second half gave the team a chance to retake the lead. Miller finished the game with 19 points and eight rebounds but it wasn’t enough to claim a win.

The Mountaineers were led in scoring by senior guard Jalen Gibbs, who accumulated 18 points. Baxter finished the game with 17 points and five rebounds.

Broadus said rebounding and turnovers were the main reasons the team lost the game.

“When you don’t rebound and let a team come in your building and outrebound you, that’s what happens,” Broadus said.

Miller said the team didn’t execute its fundamentals on the court and it ultimately hurt them.

“The little stuff mattered and it hurt us at the end,” he said. “The missed box outs, the loose balls we could’ve got, the defensive miscues.”

Miller said taking what the defense was giving him was the key to his strong play.

“Malik played really well,” Broadus said. “He was really good today for us.”

Sophomore guard Ja’Niah Henson led the Lady Bears in both scoring and assists. She accumulated 19 points and four assists.

“I was just trying to feed off my team’s energy along with getting them energized,” she said.

Senior forward Dahnye Redd had a double-double with 16 points and 12 rebounds.

Henson said she wasn’t surprised by the stats Redd posted.

The Bears’ are now scheduled to face Lincoln University on Tuesday, Dec. 1 at 6 p.m. in the Hill Field House.

The Lady Bears are scheduled to also play on Dec. 1 against the Marshall Thundering Herd at 6 p.m. in West Virginia.