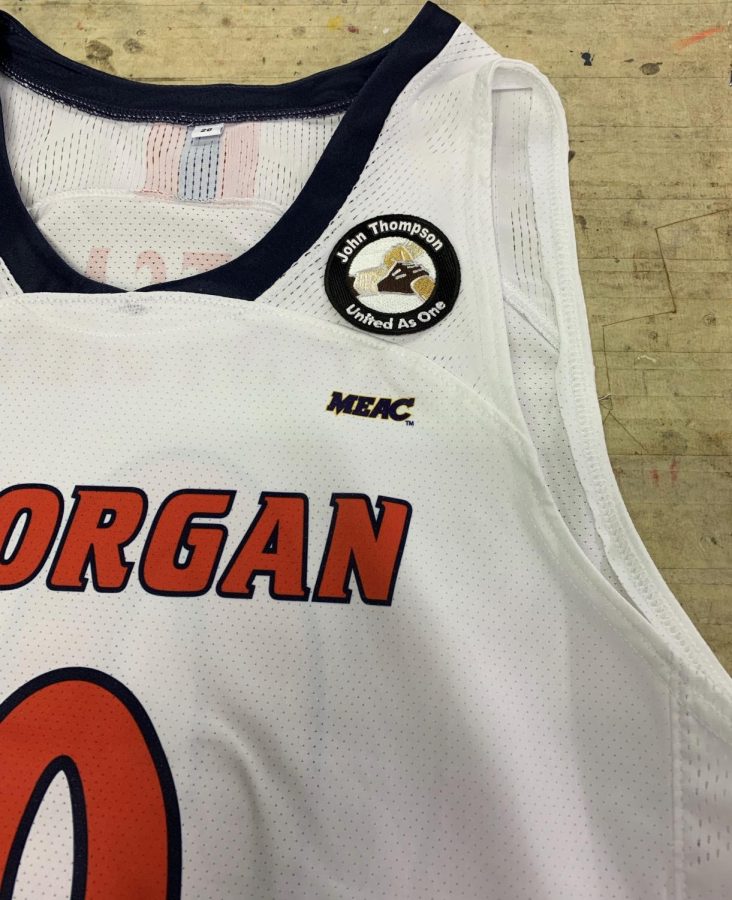 Morgan State's men's basketball jersey, which features a patch honoring the late John Thompson Jr., is located on the left shoulder of the jersey.

Broadus, a Washington D.C. native, knew Thompson Jr. since he was a child and considered him a father figure. He played against Thompson Jr.’s son, John Thompson III, during his high school career.

But it was at Georgetown University where Broadus became close to Thompson Jr.

Thompson Jr. was best known for being the head coach of Georgetown University’s men’s basketball team from 1972 to 1999. Broadus began his first assistant coaching stint at the same school in 2004, working as an assistant coach for Thompson III.

Broadus said it was typical for Thompson Jr. to call him in the middle of the night to give him basketball advice about the art of coaching.

“The impact he had was that work never stops. If you stopped somebody else was working,” Broadus said. “It wasn’t just about making a dollar, it was about making kids’ lives better.”

Thompson Jr.’s career accomplishments included being the first Black coach to win the NCAA national championship with an all-Black roster and being a 1999 inductee of The Naismith Memorial Basketball Hall of Fame. He died at the age of 78-years-old.

Junior guard Malik Miller said Broadus takes some of the coaching strategies he learned from Thompson Jr. and applies it to Morgan’s basketball program.

On Feb. 1, Broadus invited Thompson Jr. to speak to Morgan’s basketball team before their game against Howard University.

“You don’t come across legends that often,” Devonish said.

Miller said it was the first time he’d ever heard from a coach with as much experience as Thompson Jr. He said the biggest thing he learned from him was the importance of players trying their hardest when they step on the basketball court.

“The biggest thing I learned is just go out there and play hard,” he said.

The Bears are scheduled to debut their new jerseys Wednesday, Nov. 25 at noon in a face-off against Mount St. Mary’s University in the Hill Field House. The game will stream live online due to the coronavirus.