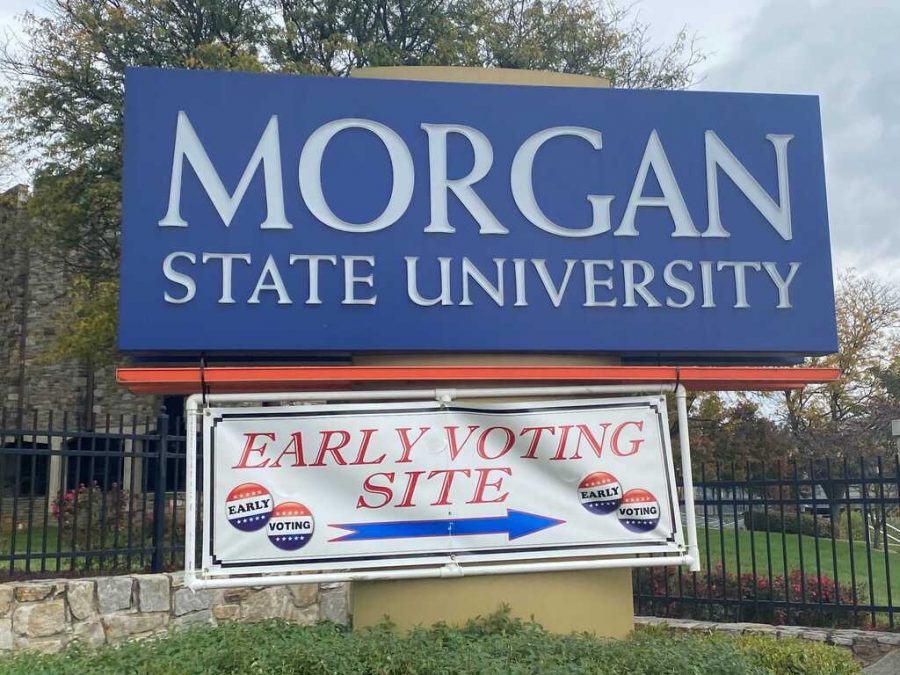 On Election Day, local residents, students and faculty showed their support to first-time voters and returning voters as they waited to vote at Morgan State’s Hurt Gymnasium on Tuesday, Nov. 3.

Throughout the day, snacks and refreshments were distributed by Morgan State’s Royal Court and other campus organizations while hundreds of voters waited in line to vote.

“Having a polling site on campus makes voting accessible for students and people in the community,”said Tatyana Moore, a senior elementary education major. “It shows that Morgan is a community-based campus.”

With the results of Election Day less than hours away, Baltimore residents filed behind one another to cast their ballot for the 2020 general election at various poll sites scattered within the city, including the Hurt Gymnasium.

In September, Morgan State was made an official voting site for the election and accumulated approximately 2,000 votes a day, according to the Baltimore City Board of Elections. Residents also utilized the ballot drop-off box, located in front of the newly constructed Tyler Hall and on the corner of Hillen Road and East Cold Spring Lane.

Following the successful turnout of the early voting, local leadership organizations showed their support as voters made their way to the polls on the final day. They credited the campus in-person polling site for encouraging an increased voter turnout.

High school seniors Cayla Moore and Jamiera Collins said it was important for them to be there to represent their generation. They are both students at The Baltimore Leadership School for Young Women.

“Morgan State is providing an outlet and space for HBCU students and residents to vote,” Moore said.

Those who were able to vote on Morgan’s campus were appreciative of this being such a convenience for them. Many voters were amazed by the huge turnout of young voters and student leaders present. Among those voters present, Baltimore resident Jameela Alexander said what brought her out was the importance of serving her community and influencing people to vote.

“It is great to use a college campus specifically because young people and students have so much voting power and if we can get the whole community here, that is powerful,” said Baltimore resident Brig Dumais, who voted at the campus polling site.

Morgan’s campus was flooded with political signs encouraging people to vote and Morgan students did exactly that, including junior music major Alyssa Holder. She and her mother voted inside Edward P. Hurt Gymnasium on Oct. 26.

“I would say it was a big turnout, I waited in line for an hour but there were a lot of people behind me and they just kept coming,” she said. “I felt great about it and it made me feel comfortable because it was a place I am familiar with.”