In an interview with The Spokesman's sports editor, Morgan's Athletic Director Edward Scott explains the nuances of running an athletic department during a national pandemic 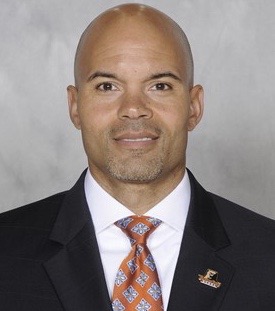 However, the plan was altered after 12 of 77 Morgan student-athletes tested positive for the new coronavirus after returning to campus during the summer. The following month, the Mid-Eastern Athletic Conference (MEAC) announced the suspension of fall sports.

“I was very proud of the MEAC and the presidents and athletic directors,” Scott said. “It was a tough decision we had to make but I think it was the right decision based on who we are and what we think we can do successfully right now.”

In August, Scott and members of Morgan’s athletic community mourned the sudden death of Jordan Cofield, the Bears’ wide receiver and kick returner.

“Days like today serve as a sobering reminder that what we do is bigger than sports,” he said.

Needless to say, it’s been a busy year for Scott. He’s been in constant communication with student-athletes, coaches, and athletic directors alike to prepare for a year filled with uncertainty.

In a one-on-one zoom interview with The Spokesman’s sports editor, we discussed Morgan’s football and basketball season, how the pandemic has affected recruitment and how his student-athletes are coping without their team.

Conferences like the SEC, ACC and Big Ten are having football seasons this fall. Is there anything MEAC officials have taken from these conferences to try to bring football back?

To be honest, the MEAC is in a different position like a lot of the FCS conferences across the country. For us, I think it’s important we make our own decisions and not look to others. I was very proud of the MEAC and the presidents and athletic directors.

If there isn’t a football season in the spring, what do you think some of the ramifications will be?

Starting first with the student-athlete, you have some mental health concerns. It’ll be about a year and a half since the student-athletes who play football would have been able to participate. I think that’s a significant concern. I think you have to worry about the physical health because they haven’t worked out in a really long period of time. Then when you start looking at roster management, I think it gets really interesting because we’re not going to be able to keep all of the students who might want to come back. So it’s going to make the coaches have to make some tough roster decisions about who they want to bring back and honoring the commitment to the recruits who we would have coming in next fall.

What do you think MEAC basketball will look like this season? Will there be a bubble like the NBA? Is there a plan to quarantine players?

I don’t think you’ll see a bubble exactly like the NBA. I think you’ll see modified versions of bubbles. In their bubble, everybody played in one location. If we were to use a bubble here at Morgan, we would have to travel to hotels and other places. Contact tracing is a big concern because basketball teams are so small. That’s one of the concerns that basketball poses as opposed to football. In football, you still may have enough student-athletes to be able to go out and play that game. In basketball, with a roster of 15 to 18 men or women, if two people [test positive] and you’re contact tracing, it could force you to not be able to compete.

Do you think this is the most competitive MEAC basketball has been since you’ve been at Morgan?

Probably. I think the MEAC has been competitive every year. The better the [MEAC] is, the easier it is for all of us to attract talent. The only time we’re competing against our peers in the MEAC is for two to three hours a night. I think as we move forward, the league is going to stay competitive. It’s nice that all of us have been able to get some of this talent. It’s going to make the [MEAC] more competitive and more balanced as we move forward.

Tiny is the all-time leading scorer in Morgan’s basketball history, male or female. When I first got here, Tiny approached me about coming to work in the athletic department. I asked her what her endgame was and Tiny was very clear back then…she wanted to be a coach on the male’s side. I’m just really proud that she was able to execute a lot of that here at Morgan by getting on Coach Broadus’ staff as a video coordinator. She finished her master’s degree here at Morgan. A lot of folks don’t know that. I’m just really excited for Tiny. I’m excited for the Morgan family and I hope she does really well except for when Loyola plays Morgan.

What are some big ways you think the pandemic will impact the recruitment of high school athletes?

Originally, I thought not getting them here on campus was going to be a big deal. I think Morgan’s campus sells itself very well. I call it the oasis in the middle of Baltimore. I thought that would be the major impact. What we’ve chosen to do, especially in football, is to really go after the 2021 recruiting class to try to get a new crop of freshmen in here to keep turning the culture of that program. We’ve made out very well on the football side and on the basketball side, we’re pretty well stocked also It is a hindrance to some potential student-athletes, especially those who live further away who may have never been to Baltimore and may have preconceived notions about what Morgan or Baltimore is really like.

How are athletes who are not staying on campus staying in touch with their coaches and other members of the athletic department?

Zoom and we have another platform called Teamworks. We were the first HBCU in the country to go fully live with Teamworks. It’s an internal platform that allows us to message, send remindersn and do scheduling. If we’re looking to schedule a call, we can pull up everyone’s schedule and find the best time to do it.